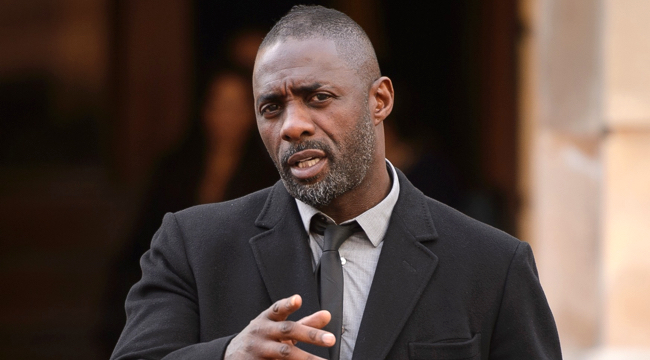 Anthony Horowitz, the author of the new James Bond book, Trigger Mortis, did a recent interview about his first foray into the world of 007. Horowitz let fly that he wasn’t thrilled with the prospect of Idris Elba stepping into Bond’s well-heeled shoes once Daniel Craig makes good on his mumbles to leave the franchise. Horowitz is free to have an opinion, of course, but his explanation has caused some massive waves:

“Idris Elba is a terrific actor, but I can think of other black actors who would do it better. For me, Idris Elba is a bit too rough to play the part. It’s not a colour issue. I think he is probably a bit too ‘street’ for Bond. Is it a question of being suave? Yeah.”

This isn’t the first time someone associated with the franchise has dropped such a bomb. Roger Moore reportedly said the very English Elba wasn’t English enough to play the role. Moore attempted to backtrack with a “lost in translation” excuse, but too late.

Sadly, even Idris Elba feels skeptical about the prospect of playing Bond. He witnessed the news cycle feeding the rumor, which is “really starting to eat itself.” He thinks we’ve jinxed his chances, but the public will not take “no” for an answer. Elba would be the most interesting man (Jason Statham aside, but he’s too dangerous) for the role. Sure, Bond bookies raised the odds on “safe” prospect Damian Lewis, but Idris Elba as James Bond is what the Internet wants.

Naturally, Twitter reacted to Horowitz’s statements with a fine range of head shakes:

"Idris Elba ‘too street’ to play 007" http://t.co/3QTE6Nv2d4 Ah the smell of desperate racism in the morning. pic.twitter.com/7mJKu5Xqm9

If idris doesn't get the part it will be 100% be due to white male insecurity in hollywood. He's perfect for it.

A James Bond author who is not Ian Fleming (who has been dead longer than most of us have been alive) doesn't want Idris Elba as Bond. Cute.

This Idris Elba story taught me that someone WRITES the James Bond novels. I thought they were transcribed from the dreams of TSA agents.

"Idris Elba is 'too street' to play james bond" pic.twitter.com/x4SiaLeozB

"Idris Elba isn't suave enough to play James Bond" is the funniest and stupidest and most embarrassing thing any other man could say.

Ding! Ding! RT @ncrediful: Let's make our own "James Bond" like we did w/ "The Wiz". Somebody call Quincy Jones.

WHEN I HEARD #IDRISELBA WAS TOO STREET FOR JAMES BOND pic.twitter.com/Adv0upflrw

Guy who writes James Bond novels might be something of a bigot? You don't say.

.@idriselba viewed as 2street by James Bond author is his way of saying 2 BLACK, b/c we know Bond was created 2 portray white male supremacy

"Idris Elba is 'too street' to play James Bond." pic.twitter.com/XwfVaoHfUR

(Via The Daily Mail)