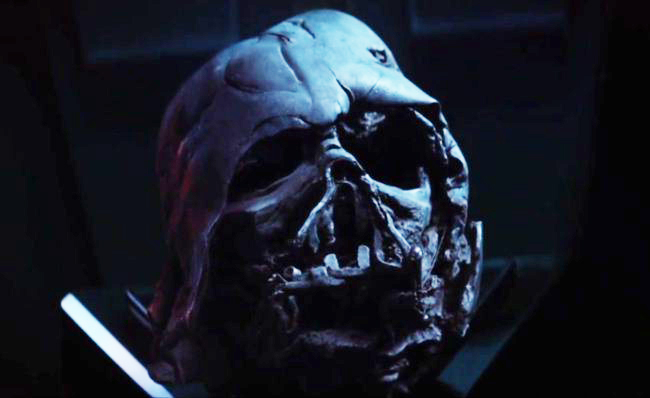 There’s a new Star Wars: The Force Awakens trailer, you might have heard. In fine tradition, we’re here to analyze the hell out of it. Like, for example, this:

That’s the first freaking shot. The first thing we see is a trashed X-Wing and an equally trashed Star Destroyer, and we’re guessing the one has to do with the other. Of note: It was confirmed during the panel that this is a new planet called Jakoo or Jacou or J’Accuse. Whatever. It’s not Tatooine, is the point.

We’re going to go ahead and assume this is more than a shout-out, but man, Vader’s helm really got smashed up, huh.

Next up… Luke? Perhaps?

Not sure, but whoever it is, they’ve got a mechanical hand in the same place Luke lost his. That’s a pretty good sign. Oh, speaking of Skywalker property:

Look familiar? It should. It’s the lightsaber Luke lost when he was defeated in Cloud City. Also of interest: Luke is laying out his family history, and who has strength in the Force.

Then we get some X-wings, and Poe Dameron enjoying his job, immediately followed by Kylo Ren, with a sharp cut to our heroes and their plucky droid running the hell away from a fight:

Of interest is that John Boyega is out of his stormtrooper gear, and if you look closely, they’re being attacked by TIE Fighters; it’s a nice little nod to North by Northwest, actually. Next up: Another Sith!

This is definitely not Kylo; the shot clearly shows a non-crossguard lightsaber, and whoever this is, they’re also using the Force. To what ends, we’re not sure, but likely nothing good. EDIT: Or, rather, it is Kylo Ren and it’s just his lightsaber is rotated 90 degrees, as a sharp-eyed commenter pointed out.

After a few shots of stormtroopers and Daisy Ridley, who supposedly plays a humble scavenger, we see the new TIE Fighter design and what is presumably our heroes trashing an Imperial hangar:

Followed by still another villain, this time allegedly played by Brienne of Tarth, Gwendoline Christie:

And this dogfight. Yes, it needs to be a GIF.

It all ends with Han and Chewie telling us, “We’re home.”

As for what’s taking so long to get The Force Awakens into theaters… it probably has a lot to do with J.J. Abrams having to deal with George Lucas’ incessant notes…