Pick of the Week: The Carol Burnett Show: The Lost Episodes (Time Life)

The golden age of TV-on-DVD, that period when each week would seem to produce revelatory chunks of TV history in lovingly assembled box sets, is behind us. As DVD sales became less profitable, releases became less predictable. The last two seasons of The Muppet Show, for instance, remain unreleased and even The Simpsons has stopped appearing on DVD and Blu-ray. Of course, the case of The Simpsons points to another reason why TV-on-DVD’s Golden Age drew to a close: With every episode available for streaming on the app, why worry about discs? (Apart from, you know, preserving the original aspect ratio, the audio commentaries, the bonus features, and all the other stuff that hardcore fans care about. But I digress.)

Still, every year produces at least a set or two that proves there’s life in the old format yet. For evidence, look no further than the six-disc set The Carol Burnett Show: The Lost Episodes, which collects 16 episodes from the long-running series’ first five seasons, which have long been held up in a rights dispute. How long? They never even ran in syndication, to say nothing of appearing on any home-video format, despite being one of CBS’ most-popular shows in the ’60s and ’70s. (Time Life has also released a larger, 22-disc set containing 45 episodes.)

What’s more, they’re pretty delightful, with Burnett a troupe of regulars that includes Harvey Korman, Lyle Waggoner, and Vicki Lawrence, and a slew of guest stars throwing themselves into fun, often self-consciously hokey vaudeville-inspired sketches and musical numbers. It’s a fun show when the sketches work and sometimes just as fun when things go wrong. (Witness Burnett and Korman just barely keeping it together in a sketch that finds Burnett falling off a swing while singing.) There’s an occasional edge to them, too. When jazz singer Ann Wilson appears in the soap-opera parody As the Stomach Turns in a 1968 episode from the show’s first season, the jokes turn topical, touching on white flight, white hypocrisy, and the lengths black people have to go to be accepted. This works as a time capsule in other ways, as well, thanks to guest appearances by everyone from Bob Newhart to Burt Reynolds. It is, in other words, the sort of stuff that shouldn’t be left to molder in the vaults, and evidence that past efforts to put out TV on home video haven’t yet emptied the archives — and that it might not be worth giving up on DVD and Blu-ray sets yet. 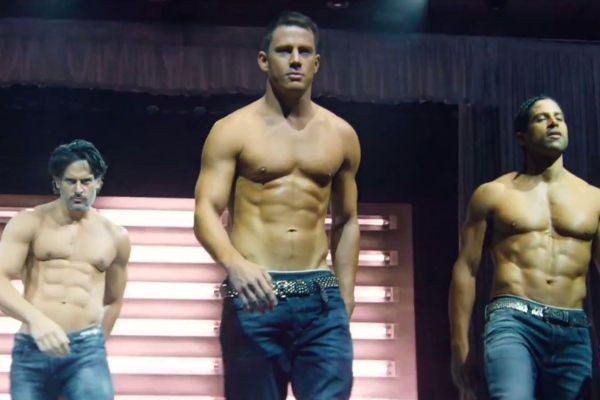 Magic Mike XXL (Warner Bros.)
If nothing else, Magic Mike XXL works as the Stop Making Sense of male-stripping movies thanks to a climactic sequence that follows one energetically staged, rousingly shot routine after another. There’s more at work in this sequel to Magic Mike, however. Channing Tatum returns as the lead and long-time Steven Soderbergh assistant director Gregory Jacobs takes over directing duties (with Soderbergh serving as DP and editor). But where the original doubled as a look at life in a struggling economy, the sequel is a looser movie with other matters on its mind, specifically what drives the women in the audience to show up for the show, what they get out of it, and what might be missing from their lives elsewhere.

Manglehorn (MPI)
Al Pacino plays an alienated locksmith in this odd David Gordon Green-directed drama. It’s not the grumpus-has-his-heart-melted drama it first appears to be, but it’s not especially satisfying, either. But if you want graphic footage of a cat undergoing surgery, look no further.

Me And Earl And The Dying Girl (Fox)
A hit at Sundance, Alfonso Gomez-Rejon’s Me And Earl And The Dying Girl found both passionate defenders and equally passionate detractors upon its release. The story of a self-involved teen (Thomas Mann), his best friend Earl (Ronald Cyler II) and, you guessed it, a dying girl (Olivia Cooke), it’s stylishly shot and filled with fun film buff references and strong performances. (Cooke is especially good.) But it’s also never quite as moving as it needs to be to get where it wants to go and it’s content to leave some key characters — namely Earl — underdeveloped. Still, it’s a worthwhile effort, and one that establishes Gomez-Rejon as a talent to watch. (And it’s filled with great Brian Eno music, which doesn’t hurt.)

Insidious: Chapter 3 (Sony)
With James Wan off directing Furious 7 his longtime writing partner Leigh Whannell took over directing duties for the third entry in a film series that’s made a virtue of doing more with less. If there aren’t that many surprises in Chapter 3, it’s still an effective, and quite scary, film that gives veteran character actor Lin Shaye some welcome time in the spotlight.

When Marnie Was There (Universal)
Will this be the last feature released by Japan’s famed Studio Ghibli? The studio’s future remains unclear after Hayao Miyazaki’s retirement, so maybe it’s best to treat each release, like this well-received coming-of-age story, as a gift.

Dark Places (Lionsgate)
When David Fincher adapted Gillian Flynn’s tough-to-put-down novel Gone Girl last year, it was a big deal. Curiously, this Flynn adaptation barely got a release earlier this year, despite starring Charlize Theron, Christina Hendricks, and Chloë Grace Moretz. Might be worth a look, though.

Going Clear (HBO)
Alex Gibney’s Scientology exposé, on the other hand, didn’t want for attention. Here’s another chance to catch it and wonder how the operation stays in business.

The Leftovers: Season One (HBO)
American Horror Story: Freak Show (Fox)
What’s your favorite flavor of TV grimness: Philosophical or creepy/campy? This week’s TV sets have you covered either way.