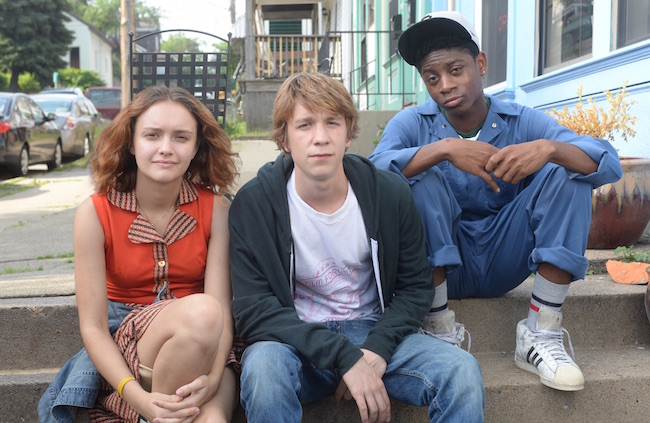 This interview became a lot more emotional than expected. Even though it may not come across that way in print, there are more than a few times during this discussion that Alfonzo Gomez-Rejon’s voice cracks. The thing is, with Me and Earl and the Dying Girl, Gomez-Rejon (a veteran of directing Glee and American Horror Story) so expertly captures the experience of (or the possibility of) death, that it makes sense to learn that his own father was dying during production of this film. And it’s obvious that those emotions are still raw, even during the monotony of a press tour that started in January at the Sundance Film Festival.

The craziest thing about Me and Earl and the Dying Girl is that these emotions are expressed between two people who are not in love – which, in this case, would be Greg (Thomas Mann) and Rachel (Olivia Cooke) – and, at times, don’t even seem to like each other that much. (Greg often breaks the fourth wall in this movie, explaining what would be happening if this were a traditional story about two people in love.) Greg is basically guilt tripped into visiting Rachel, who he doesn’t even know that well, who had just been diagnosed with leukemia. Eventually a friendship forms, dissipates, then forms again.

Greg is also a filmmaker. Along with his best friend, Earl (Ronald Cyler II), the pair make homemade films based on classic cinema, often with titles made with ironic puns. Greg is asked to make a film for Rachel, which he struggles with for most of the film. (The film references during Me and Earl and the Dying Girl are apt, because it’s hard to ignore Gomez-Rejon’s own stylistic techniques, which have drawn comparisons to Wes Anderson.)

At Sundance, Me and Earl and the Dying Girl was the little film that could … the underdog. That all changes once you win Sundance. The expectations become higher. But, as Gomez-Rejon explains, this is still just a movie he made for his father.

At Sundance, your movie was kind of on the radar, then it wins.

Yeah, you can’t prepare for any of that. We were so exhausted finishing the movie – and physically ill — that reception was a complete surprise.

Is it difficult going from a movie that “you hope people like” to “Sundance-winning film”? The expectations have completely reversed.

Yeah, even the first week when so much was made about that premiere and that Fox Searchlight had bought us that evening, I was not prepared for the award at the end because I assumed that there would be backlash. So I was surprised that happened. Maybe people saw the movie and genuinely felt something … I’ll see the ads, “opening this Friday.” I’ve never been part of something that was “opening this Friday.”

Early in the film, Greg breaks the fourth wall and makes a declaration about what happens at the end of the movie. Whether we believe him is up to us. Did you ever debate that scene?

Not once. I think it has to do with human nature, depending if you’ve been there. I have. You lie to yourself and you always think and hope that it will turn out differently.

I’ve been there, too. My college roommate died. And you capture the emotions that surround something like that very well.

It was my father.

You capture it very well.

I was in it. And I couldn’t find the words for it. I didn’t know how to give it a shape. So, I was in deep denial; deep guilt and anger. And I was, oddly enough, getting somewhat successful as a television director and getting recognized for the work. But, as an “artist” – with a small “a” – I was not giving myself an opportunity to express what I was feeling and not having any other outlet. And then I read the script and I was like, “I can throw myself into this and make it about it.”

I have a friend going through something right now, and I know this movie is very on the nose for him.

At the end, it was being able to make a movie for my dad the way that he makes one for Rachel that gives a shape to abstract emotions and finds a certain sense of hope at the end — a continuum that maybe the person is not as clearly defined, they are also everywhere. And to talk about them and that they are not only a vivid memory, their story evolves just with me talking to you about my father … Emotionally, I did grow up, like Greg, making this film.

And in the film, Greg and Rachel have a very complex relationship. Sometimes they don’t even like each other.

We didn’t want to put a bow on anything. There are a couple of scenes that are not in the final film that are more traditional in a clear arc, third-act story.

There was a very important monologue that Greg gives at the end of this film that is clearly the end of an arc. Someone who wants to be invisible is not in the spotlight in front of everybody, telling everybody what he’s feeling. It worked so well on the page, that was the audition piece for everybody — and it was beautifully performed by Thomas. But the film, at some point, has to be nonverbal, you have to be beyond words.

There have been a few comparisons between the visual styling of this film to those of Wes Anderson. Do you like that?

Do you see the connection?

Look, of course, they are all part of my DNA. I love film.

It’s not like people are comparing you to Uwe Boll.

[Laughs] I’m a huge admirer of Wes. Yeah, I understand the connection.

And the comparison is less the characters and more the way you frame shots.

Well, my background is in the fine arts and I love composing shots … and trying pushing that, to a point. I think the beginning of the film, the first third of the film, is quite stylized — because that is Greg, trying to control his surroundings and his life and relying on these masks and barriers. But then, as he begins to pay attention and starts to listen, the camera does calm down quite a bit and becomes quite still. But, I totally see why.

There are a lot of references to other films during this film.

The fact that they were making films was in the book and the screenplay. What films that they parodied was something that I did to personalize the whole process of making this film and as an opportunity to give thanks to people.

What were your favorite pun titles?

My Dinner with Andre the Giant, and I love that image as well. It’s so simple. There was one we didn’t use, which was Ron, which was a parody of Kurosawa’s Ran, but it was about Ron Reagan, Jr.

I’m sure he would have liked that.

You have an entire wideshot of titles. There are already so many on the movie, I’m astounded there are deleted versions.

There are a lot in there, but we could only shoot so many and only use so many in the film, but what’s in the film is the best.