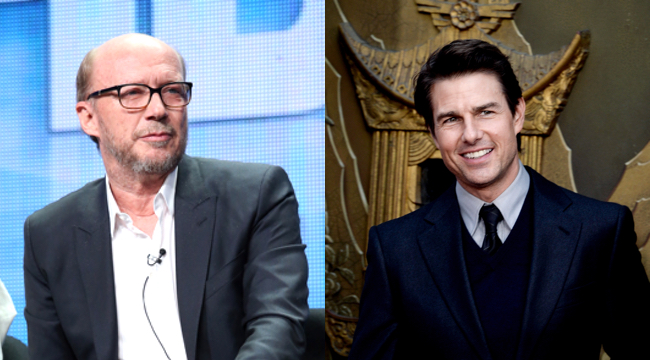 Paul Haggis‘ decades-long history with Scientology famously came to a screeching halt in 2009. Haggis departed from his religion through a critical letter about the church’s intolerance for homosexuality. Haggis, who devoted an ungodly amount of money and 35 years to L. Ron Hubbard’s brainchild, finally had enough. In the years that followed, Haggis believes he was spied upon by a CO$ member posing as a reporter.

Haggis — who is currently promoting his HBO miniseries, Show Me A Hero — isn’t impressed with how reporters didn’t ask Tom about Scientology during his latest press tour. Haggis called out the media for asking softball questions to the “coddled” Cruise:

“We forgive anybody anything if they’re a movie star, I guess! [T]hat’s not his fault. His PR people are very smart. But I don’t know how journalists can continue to call themselves journalists if they aren’t brave enough to ask a question. I mean, how big does the elephant in the room have to be before you ask about it? There are things called journalistic integrity, and there are things more important than promoting a movie sometimes. It was so glaringly obvious. There was this huge elephant there, and every journalist agreed not to address it. Why? You’re just a PR person at that point. Shame on you.”

Haggis switches topics (in the full interview) to discuss how he engineered Crash as a mirror to liberal politicians. He’s already made it clear that the film shouldn’t have won the Best Picture Oscar, so the discussion is a telling one. Haggis also has thoughts about the current presidential debate, and how the focus for all the hot-button issues has shifted to the GOP. This is largely the doing of headline-grabber Donald Trump, of course. Haggis maintains that many issues other than immigration and abortion deserve attention.

(Via The Daily Beast)