Bone Tomahawk was one of 2015’s most welcome surprises, a blackhearted fusion of genres from a first-time director working with the stylistic flair of a seasoned pro. Writer S. Craig Zahler tried his hand at filmmaking with the unexpected horror-western, sending Patrick Wilson and Kurt Russell into the clutches of a clan of cannibalistic cave-dwellers, where only horrific violence will permit them to escape with their lives. It was a fine, off-beat sort of film that introduced an intriguing new directorial talent as well as delivering the indelible image of a guy getting straight cleaved in half.

Now that Zahler’s carved out a little piece of Hollywood for himself (from the tender, fleshy part of the thigh), it was only a matter of time until he took on a sophomore project. Fangoria has the news Zahler, while at Frightmare Weekend in Texas, announced plans to reboot Charles Band’s cult-beloved horror series Puppet Master, writing a new installment with directorial duties still up in the air. Running for ten installments with an 11th expected this year, Band’s franchise featured a cadre of bewitched toys that spring to life and murder people in the dead of night, a campier riff on the Child’s Play films. Zahler’s film, titled Puppet Master: The Littlest Reich, would not be a full reboot, but a sort of spinoff building and expanding the pre-existing mythology of the franchise. As the title would suggest, the homicidal toys will not lose their deep commitment to the ideals of the Nazi party.

Of the many sprawling horror franchises to emerge from the ’80s — Friday The 13th, A Nightmare On Elm Street, Halloween, Hellraiser, the list goes on — Puppet Master may very well be the strangest. Taking itself progressively less-seriously with every passing installment, the films split the difference between self-conscious silliness and genuine terror, like a slightly more competent version of the Elm Street films featuring the kooky, pun-making Freddy Krueger. It may be prudent to reserve the full measure of eager anticipation until the film has landed a director, but it’s an exciting prospect to hear that the films may make it back into theaters after years in the direct-to-video gutter. Below, feast your eyes on the new poster for this unholy revival: 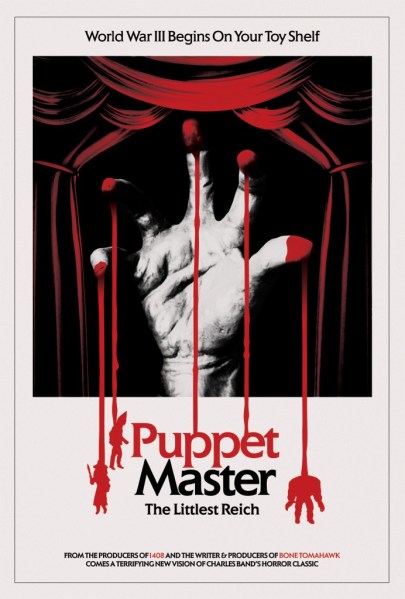