How Many Supernatural Bears Does Jeff Bridges Fight During ‘Seventh Son’? (And 24 Other Urgent Questions) 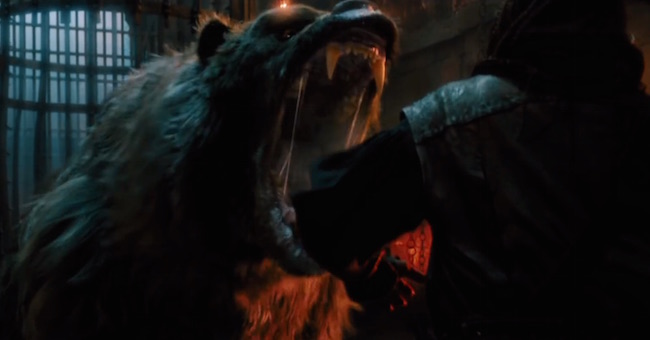 After many, many delays, Seventh Son will finally be available for you to watch in exchange for legal tender. Jeff Bridges (Blown Away) plays John Gregory, a “Spook” who trains the seventh son of a seventh son, named Tom (Ben Barnes), to be his monster-killing apprentice. Julianne Moore plays an evil witch. What is this movie?! Ahead, we answer every question that you could possibly have about Seventh Son.

Q: What is this movie?

A: I’m not exactly sure, but I can see why it’s been delayed a very long time.

Q: When was Seventh Son filmed?

Q: Can you compare this to something so as to better demonstrate how odd this is?

Q: How many sons could you theoretically have had in that amount of time?

A: Not counting births that involve multiple children, a couple could be on their fourth son by now.

Q: What passes for sarcastic humor in the world of Seventh Son?

A: A Spook is presented as a knight of some sort, only they fight the supernatural.

Q: Are there a lot of Spooks?

A: There used to be, but now it’s just John Gregory.

Q: What is John Gregory’s mission?

Q: Is it a requirement in the world of Seventh Son to be given a boring name?

A: It’s not stated one way or another, but these names do seem better suited for legal procedural than a movie about swords and witches.

“Where’s Tom Ward with the brief?”

“Well, he’d better hurry, or Judge Malkin will hold him in contempt.”

Q: Other than fight the witch, what else do John Gregory and Tom Ward do?

A: Not a lot! Though, Gregory likes to drink alcohol in his spare time, while Tom learns that not all witches are necessarily bad people. For being a movie that lasts over 100 minutes, really not that much happens.

Q: How many times does Jeff Bridges act drunk in Seventh Son?

Q: On a scale of one to ten, how much scenery does Julianne Moore chew as Mother Malkin?

A: Julianne Moore is on the eighth level of scenery chewing.

Q: Is Julianne Moore convincing as a witch?

A: Again, she looks like she’s having fun, but Julianne Moore’s version of an evil witch is the most pleasant, most welcoming evil witch in the history of cinematic witches.

Q: What kind of accent is Jeff Bridges doing in Seventh Son?

A: It sounds like a cross between Bane from The Dark Knight Rises and Jeff Bridges.

“To be no good at something bad is good.”

Q: What’s the dumbest line of dialogue in Seventh Son?

Q: While watching Seventh Son, did you actually write, “This is stupid,” in your notes?

Q: Do you have the worst handwriting of any living human?

Q: So, Seventh Son is a terrible movie?

A: It is certainly stupid, and it’s not a good movie, but it’s more dumbfounding than “terrible.” For the life of me, I have no idea who this movie is for or why it exists.

Q: Would it have been better suited for Jeff Bridges’ recordings about falling asleep?

A: That actually makes more sense.

Q: Does Julianne Moore, while being burned alive, transform into a dragon and fly away?

Q: Wait, how is this movie not wonderful?

A: The bear scene isn’t bad.

Q: With Jupiter Ascending and Seventh Son being released the same day, is this like Sophie’s choice?

A: No. It’s the opposite of Sophie’s choice in every way, really.