‘Sicario: Day Of The Soldado’ Is An Intense, Gritty Thriller That Will Leave You Wanting More 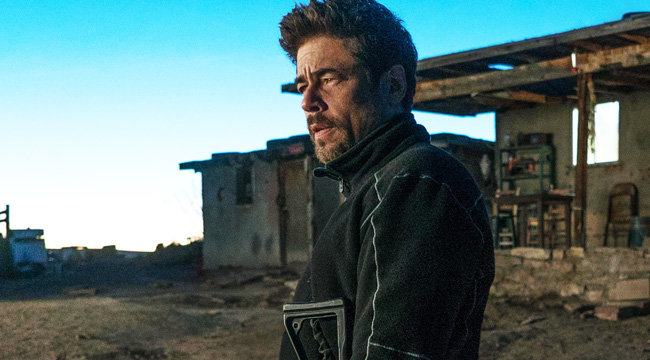 Benicio del Toro has, kind of quietly, morphed into a full-fledged movie star in a day and age where there really aren’t many movie stars left. Del Toro’s best known early work is probably The Usual Suspects, but that led to a few years of showing up in stuff like Excess Baggage and The Fan. After Fear and Loathing in Las Vegas and Traffic, Del Toro soon became a go-to actor of substance.

Looking at Benicio del Toro’s filmography now, it’s almost as if he had a reset around 2008 after Steven Soderbergh cast him as the lead in his epic, Che. Over those next four years, his acting output dwindled a bit (he did direct a segment of 7 Days in Havana). But then something interesting happened as del Toro, like so many other actors today, went into franchise mode. After flirting with Star Trek, del Toro was cast as The Collector in the ongoing Marvel Cinematic Universe. This isn’t a huge role, but it allows del Toro to show up in any of the cosmic-themed films and be quirky.

And then, of course, he signed on for Rian Johnson’s Star Wars: The Last Jedi, playing a hacking mercenary named DJ who doesn’t have a heart of gold – and maybe has the best line in the new trilogy. After Finn screams at DJ, that he’s wrong about the Resistance, DJ responds by simply saying, “Maybe.” (In Johnson’s director’s commentary for The Last Jedi, Johnson says del Toro’s line was supposed to be something like, “wrong and rich,” but del Toro changed it to “maybe” on the spot.)

With Sicario: Day of the Soldado, it appears del Toro finally has a franchise of his own. Which comes as a pretty unexpected development, because Denis Villeneuve’s first Sicario film was excellent, but it’s also not the kind of movie where anyone is watching it and thinking, “There will be a bunch more of these movies.” Especially considering that Sicario only grossed $84 million worldwide. And it happens all the time: actors and filmmakers say things like, “Oh, we have a good idea for a sequel,” and we think, “Oh, that’s great, but that will never happen.” Well, this time it did happen. Here we are with a second Sicario film.

For Sicario: Day of the Soldado, gone are Villeneuve (who directed Blade Runner 2049 instead) and star of the first film, Emily Blunt (who has been busy with A Quiet Place and Mary Poppins Returns). And those are the two reasons why I’m so surprised I enjoyed Sicario: Day of the Soldado as much as I did. Because, usually, when the star and one of the best directors working today don’t return for the sequel, that’s not a good sign. But nothing about these Sicario movies are usual.

In the first film, Emily Blunt’s Kate Macer was the moral center of the story. Everything that Benicio del Toro’s mysterious Alejandro Gillick and Josh Brolin’s Matt Graver — a government official who bends any rule to his liking — do is seen through Kate’s moral lens. In Sicario: Day of the Soldado, that moral lens is missing, at least at first. Here we now are, just watching Brolin’s Matt Graver and del Toro’s Alejandro Gillick do what they do and no one is really there to question their tactics. Catherine Keener plays Matt Graver’s boss, but at times she’s even more hard lined than he even is. It’s both odd and fascinating and works a whole lot better than I ever suspected it would.

In recent years screenwriter Taylor Sheridan as become kind of a master at these types of stories: movie about salt of the Earth law enforcement people who Know How To Get Things Done. It’s interesting: in the past we kind of took for granted that these people actually exist. Now, with the world seemingly crumbling around us, Sheridan trades in a fiction that is becoming a bit less believable, yet more and more appealing.

After a terrorist attack in Kansas City, the U.S. government suspects the bombers entered the United States from the Mexican border. (Yes, like the first Sicario film, this movie has themes that will resonate with what’s going on in the news right now.) In response, the U.S. government adds the Mexican cartels to their terrorist watch list and attempts to destabilize the cartels’ smuggling enterprise by secretly trying to start a war between them all. To do this, Matt Graver brings in his old friend Alejandro Gillick to kidnap the cartel head’s young daughter (Isabela Moner), then frame another cartel for it. Things are going according to plan until it’s discovered that the terrorists were all born in New Jersey, so the Mexican cartel plan is scraped, leaving Alejandro on his own with the girl he kidnapped – with orders to kill her. And this is when Sicario: Day of the Soldado becomes del Toro’s movie, and it’s also when the film finds its own moral center.

We didn’t know a lot about del Toro’s Alejandro Gillick in the first film, other than he was seeking revenge for the murder of his family, but we learn a lot about him here. And we learn how far he truly will and won’t go to exact this revenge. Through Kate Mercer’s lens, we never really got to see Alejandro’s own struggle with what’s right and what’s wrong. Here, left on his own, he becomes the moral center. The film ends in a way that totally sets up a third film, which I’d happily watch. (And when I interviewed Emily Blunt a couple months ago for A Quiet Place, she said del Toro already approached her at the gym with an idea for a third film.)

Sicario: Day of the Soldado is an intense, at times morally ambiguous, and gritty thriller that will leave you wanting more. And, now, Benicio del Toro finally has a franchise of his own.