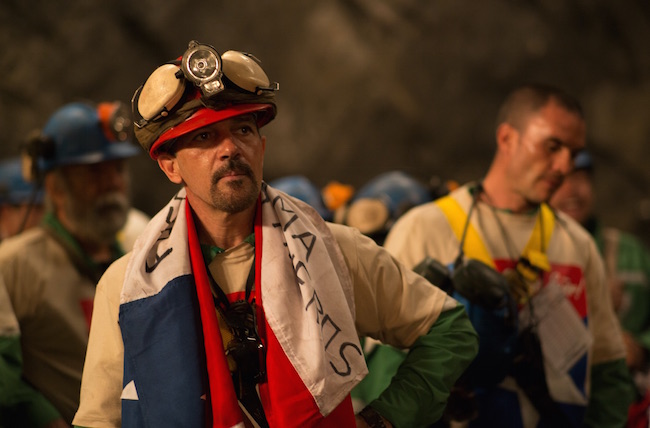 The real-life story of the 33 Chilean miners who were trapped in a mine is a little bit hazy to me, especially after watching The 33, the new film about their harrowing experience. I certainly remember it being a big deal, but I also, for some reason, always assumed they’d be fine in a foolish, “How hard could it be to dig them out?” kind of way. The best part of The 33 is learning about all the things I didn’t realize — like just how deep these minors were and just how difficult it is to drill a hole that deep. No matter the quality of a film like The 33, it’s easy to appreciate the chance to learn more about a compelling story. So, when looking at this movie that way, it serves its purpose. Other than that… well, it’s not so good.

It’s not like there haven’t been well-made movies about being trapped in a confined space; 127 Hours immediately comes to mind. But this kind of film almost needs a special hook or gimmick. Not that 127 Hours had a gimmick, but it was pushed as “come watch James Franco hang out on camera for a couple of hours by himself,” before it was pushed as “you might throw up during this movie.” Comparatively, The 33 (starring Antonio Banderas as Mario Sepúlveda, who became the best-known of the miners) is told in a straightforward way — and I suppose there’s only so much you can do with 33 actors hanging out together in a small room. (There is one strange scene that’s so out of left field, it plays as way too absurd when compared to the rest of the movie. An imaginary cow is involved.)

In 2010, the San Jose Mine, located outside of Copiapó, Chile, collapsed, trapping 33 workers 2,300 feet underground. An accident like this is usually a death sentence, but all 33 miners were rescued 69 days later. It’s a harrowing true-life feat of bravery, resilience, and a little bit of luck. Unfortunately, the cinematic version doesn’t quite know what to do with itself as we wait for these miners to be rescued. Did I kind of repeat myself there? Well, that’s because there’s not a lot to say about this movie that’s not repetitive.

There’s so much time to waste, we even get to watch a scene involving a fight between trapped miner’s (Oscar Nunez, best known for playing Oscar on The Office) wife and his mistress. Whether the mistress will be allowed to stay in the camp that’s set up near the collapsed mine then becomes a major subplot. The film spends about as much time in this camp as it does in the mine. We get many scenes of the concerned and earnest government representative (Rodrigo Santoro) promising everyone in the camp that things will be okay. At one point, a woman plays the guitar and sings a song. It’s a nice song, and she has a nice voice, but I couldn’t help but wonder why I was being treated to this performance when my concerns were with the miners — who we see rationing food, arguing and just being genuinely miserable. About halfway through the movie, drillers drill a hole that reaches the miners, which at least allows for food and supplies to be provided. At this point, it doesn’t seem all that bad, comparatively.

Anyway, this is one of those movies where the best of intentions were present, but the film doesn’t work. There is one touching scene in which we see all the real-life miners, reunited, hanging out on a beach. This is nice. What happened to them is an amazing story. It’s just The 33 isn’t an amazing movie.