This week in This Week In Posters, we begin with Bart Layton’s American Animals, starring Barry Keoghan and his weird face. The kid’s got the most unique face in the business and you’re going to cut his head off in the poster? How dare you. Anyway, I liked this move a lot, but I think we could’ve done better than a diagonal flamingo for the poster. If we got super excited about “pages turning” imagery we wouldn’t be watching a movie.

Speaking of diagonals… Well, at least they left the characters straight up and down for this one. Don’t make me tilt my head sideways, man. Also, what is that background? It has a honeycomb pattern. Is that because she’s a wasp? Does The Wasp get to make herself a nest out of mud and spit? I’d watch that. Seems a little sexist though, having the woman nest and whatnot.

Is this the most ambitious crossover event movie ever? How’d they even find a dock big enough for all those people to stand on? And how dang tall is Christine Baranski? I can’t wait for this to answer the question “how many flowing patterned tops is too many?

Side note: who keeps trying to make Dominic Cooper happen? Is it the British?

The artwork on this Armed poster is pretty cool, but I believe it was last week we were discussing people in scary masks being the kiss of death on posters. And also unnecessary American flag imagery. So this is like a double kiss of death. On the other hand… William Fichtner.

Hey, another mask! And they’re inside of a gun. I’m going to go out on a limb and say this one is about a heist that goes bad. Who doesn’t like a failed heist movie? My only real problem with this is the generic title, which just makes me think of that song Veronica Vaughn sings in Billy Madison. “My Billy, my sweet Billy Boy…”

Did someone order more flag imagery?! Oh I get it, it’s because Chappaquiddick is in America. Very, ah… redolent.

Do you think he gets paid by the adjective?

What is all the debris back there? And why is Deadpool acting fake bashful about it? The face looks like he just farted and isn’t sorry. Which I guess is Deadpool in a nutshell.

On a kid’s bike?! Oh, Deadpool, you have the craziest stories! He should write a book about it, like the superhero Tucker Max.

The title looks like it’s back there sneaking up on you to make you feel bad about eating meat (which you probably should, but stop reminding me, dammit). Hmm, do you have anything that feels less like something I should do?

This looks intense and Biblical. I would’ve thought that even without the cross floating in space up there. Is that ganja smoke above his head there? Anyway, cool poster.

Heredity seems to have discovered the secret that just making the eyes a little off-kilter makes people look creepy as hell. Success, I am already scared. What does the little girl have there? Is that mouse she pulled apart? Sheesh.

A Lars Von Trier serial killer movie starring Matt Dillon? Yes, count me in. Sometimes all you have to do is present the facts. They should have his brother Kevin play the medical examiner.

[This is where I would’ve put the gif of Kevin Dillon saying “I never seen brains like that before” from Platoon, if I could find it.]

Is Natalie Dormer allowed to be in anything but horror movies since she left Game Of Thrones?

Remember what I said about the “one-eye showing behind the main character’s head” poster. That’s the ol’ stalker design. Works every time.

Sorry for that. The spelling change there was a brain worm. Anyway, I’m surprised the poster didn’t point out that Terry Gilliam has been making this movie for 20 years. He puts Boyhood to shame! And I think his star spent the entire time growing out his eyebrows.

Oh hell yeah, this is one for me and my Andrea Risebroughs. This is a strong design though. Remember what I said about eyes off-kilter = creepy? They did it again! This is like the Hereditary off-kilter eyes motif combined with the In Darkness one-eye-showing motif. Double creepy points. It’s like she’s about to stalk herself.

This is the second Ocean’s 8 poster in front of that giant red backdrop with the lines. What the hell is that supposed to be? Is that like the curtain opening before a show? And why didn’t we bring enough sunglasses for everyone?

I saw this movie at Sundance and mostly liked it, and you have to admit that the poster designer has a pretty tough job trying to make jigsaw puzzling look exciting. I wish they would’ve used my pull-quote, “Irrfan Khan is the best eyelid actor since Mandy Patinkin.”

So is the thing where Robin Hood has a Muslim friend canon? I always thought the Kevin Costner one invented that. Also why does this look like the lens had vaseline around the edges?

The arrows are trees, bro. I can’t wait for Robin Hood and the Huntsman, a dark twisted fairy tale from the minds behind The 300. Okay, okay, I just made that up, but here’s the real synopsis from IMDB:

Boy, who would’ve guessed that this would have “gritty” in the description.

I feel like these posters for A Simple Favor are doing an incredible job implying that the two leads might kiss, using only the most minimal imagery. But then I read the synopsis:

A SIMPLE FAVOR, directed by Paul Feig, centers around Stephanie (Anna Kendrick), a mommy vlogger who seeks to uncover the truth behind her best friend Emily’s (Blake Lively) sudden disappearance from their small town. Stephanie is joined by Emily’s husband Sean (Henry Golding) in this stylish thriller filled with twists and betrayals, secrets and revelations, love and loyalty, murder and revenge. [IMDB]

So… was I crazy? Was my read a Freudian thing? The eyebrows arched towards each other seems very sexual. To me.

This Solo poster looks like some kind of art print from Imperial Japan, complete with the rising sun motif. It’s very cool, is what I’m saying. “People in capes strolling down a fog-shrouded planet” is really Star Wars‘ wheelhouse.

Check out this poster for Star Wars: The Sitcom. Is that a two-thirds scale model of Donald Glover? 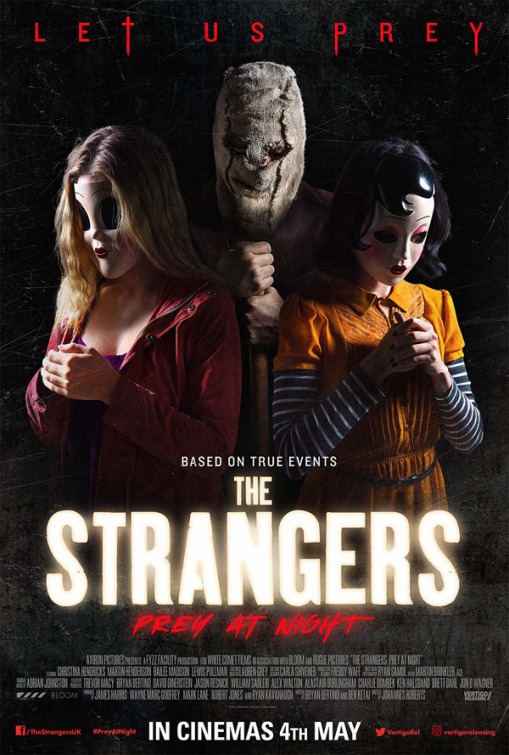 “Based on true events.”

OH GOOD. I was worried that the scary mask movie about random stabbings wouldn’t have any basis in reality so this is a relief.