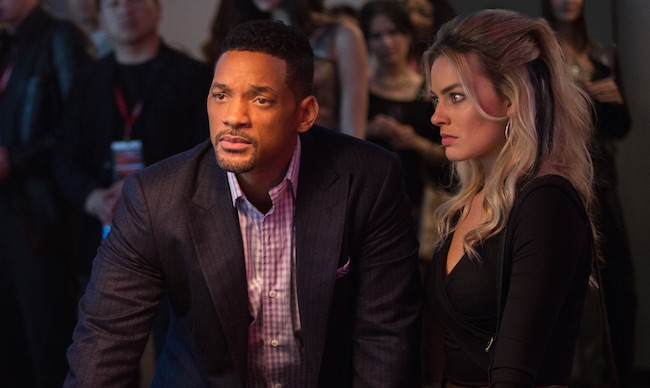 “That was the most painful failure in my career.”

Those are Will Smith’s words in a recent Esquire profile about the movie After Earth, a movie that is really only remembered by a small group of movie writers who still like to quote the phrase, “take a knee,” for reasons I’ve long since forgot. (Smith says, “take a knee,” in his new film Focus, which made me laugh out loud to the confusion of everyone sitting around me.) Anyway, Smith’s quote is both interesting and understandable. It’s understandable because the “pain” in his quote seems to come from the involvement of his son in the film, Jaden. What’s interesting about that quote is that he followed up After Earth with a movie like Focus.

Since 2008’s Seven Pounds, Focus is only Will Smith’s second movie in a starring role. (Even in After Earth, the elder Smith was barely in the movie; instead, he spent most of the feature off-screen, stuck in a spaceship with a broken leg.) The actor, who used to be ubiquitous with Fourth of July popcorn movies, hasn’t had a movie release on that holiday in seven years. Will Smith, for all intents and purposes — save for his sort of odd return in the almost now forgotten Men in Black 3 — quit acting.

It’s kind of a testament to Will Smith’s personality and popularity that we still think of him as the wise-cracking, ultra-charming actor who (save for Men in Black 3) hasn’t played an ultra-charming, wise-cracking character since… (looking back through his filmography… still looking… still scrolling back) 2005’s Hitch. Hitch! Jennifer Lawrence was 14 when Hitch was released.

But now, after “the most painful failure in my career,” Will Smith decides that it’s time to play a wise-cracking, ultra-charming character again.

Directed by Glenn Ficarra and John Requa (who previously directed Crazy, Stupid, Love together), Focus almost feels custom made for Will Smith having a midlife movie crisis. If there were a Seamless app for movies, I can picture Will Smith lying in bed, making his selections:

“Would you like your character to have a cool job?”

“Great! You are a con artist. Do you want to your character to crack wise?”

“Great! Your character will crack wise and be charming. Do you want your character to be lucky with the ladies?”

“Great! We cast Margot Robbie as your co-star, and during the film, she will like you romantically. Would you like your character to have a limp?”

“Great! No limp. Are you ready to checkout?”

And here’s the weirdest thing: This movie sort of works. It’s certainly not “Will Smith’s return to form,” but it’s a fun enough experience that I wouldn’t ask for my money back if I saw this on a free Saturday afternoon. And if nothing else, it reminds us why we like Will Smith movies so much in the first place.

In the film, Smith plays an experienced con artist named Nicky Spurgeon. Margot Robbie plays Jess, a terrible con artist who Nicky sees coming a mile away. Eventually, Nicky agrees to train Jess. Then the two, along with a team of grifters, travel to New Orleans in an effort to con every tourist in town for the Super Bowl out of their money. These scenes are, admittedly, fun to watch. (After the screening, I tried one of the theft tactics we learn about on a fellow film writer. I failed miserably as he asked, “What are you doing?” I will never be a con artist.)

Here’s the odd thing about Focus: About halfway through the movie, we fast forward three years into the future and, other than stars Smith and Robbie, we are introduced to a whole new cast of characters. What used to be a movie about a Super Bowl heist is now a movie about what may or may not be a long con involving the owner of a Formula One racing team. And, strangely, this works, too, in a, “Sure, why not?” kind of way. Mostly because it introduces Gerald McRaney to the movie, who plays an ornery cuss who (A) cusses a lot and (B) references Saturday Night Live’s “Lazy Sunday” in a derogatory way. This is the most I’ve enjoyed Gerald McRaney since… well, I was going to say Simon & Simon, but I can’t actually remember one plot of any episode of Simon & Simon, so I’ll just say “ever.”

Next up, Smith stars in Concussion, the based on a true story film about the doctor who linked football with later in life debilitations. Then, Smith stars in his first non-Hancock superhero/villain movie, Suicide Squad, which shows that Smith has regained an interest in being a movie star. (Concussion will tell if he’s regained his interest in being an “actor.”) And, if nothing else, Focus proves that Will Smith hasn’t completely forgotten how to be likable in a movie. And something tells me this is important because we still like Will Smith.