Late in the afternoon of the third Saturday in January, a near-perfect day by virtually anyone’s ideal climate standards, thousands of unconventional-looking people gathered in the epicenter of America’s most unconventional city to celebrate the life of an unconventional man, David Robert Jones, famous to the world as David Bowie.

They came from all over, the revelers. A couple from Nashville said they dropped everything, got in their car, and drove in to New Orleans the prior evening after seeing a social media posting by Win Butler, Arcade Fire’s frontman, announcing the event with the note, “Let’s say goodbye right.”

“We didn’t have time to put together costumes before we hit the road, so we just picked up some things this morning at a vintage store and a flea market and went to Walgreens for some makeup and other stuff,” the male half of the couple explained, his face adorned with glitter.

New Orleanians, meanwhile, never ones to shy away from an opportunity to celebrate anything by imbibing and dancing through the streets of their city, predictably embraced the occasion fervently.

“I’m pretty sure everyone I know in New Orleans is coming to this,” a young woman wearing a spandex jumpsuit told a friend as they walked through Jackson Square. “Every single person I’ve asked in the past 24 hours if they were going to the David Bowie parade has said ‘yes’ in response.”

“I had a bunch of things I’d planned to do today around the house; me and my roommate are having a party for Krewe du Vieux next weekend,” said a man who arrived in the French Quarter on an oversized tricycle. “But when I heard about this, I just had to say ‘fuck it, I’ll do it all later.’ Shit like this is why you live in New Orleans, right?”

Being confined to a wheelchair didn’t stop local hero Steve Gleason from being in attendance. Larry David is even rumored to have shown up. (Ed. Note: After publication, a reader wrote in to say, “He was there and was wearing a NASA jumpsuit.”)

According to reports, the idea for a Bowie tribute was conceived in conversations between Preservation Hall creative director Ben Jaffe and Arcade Fire’s Butler and Regine Chassagne, who are married. They moved to New Orleans in 2014 and had coincidentally been recently collaborating with musicians from Preservation Hall on something Bowie-related. An idea was hatched to hold a Bowie-tribute show at the Hall, a plan which later morphed into an idea for a parade so that more Bowie fans could participate.

And so it was that at just before 4pm, the doors to Preservation Hall swung open. Soon after, the venue’s famed house band emerged, joined by Butler and Chassagne. Together, they embarked on a Second Line parade that started on St. Peter Street and was slated to roll on to Royal Street, typically filled with an assortment of street performers at that time of day on a Saturday. From there it was to move on to Toulouse Street, where it would turn left toward the river. After veering right on St. Louis Street and right again on Chartres Street, the parade would then come to an end on Toulouse Street, in front of famed local music venue One Eyed Jacks.

Some of the terms people in the crowd used to describe the parade’s beginnings included a “absolute f*cking chaos,” a “sh*tshow,” a “clusterf*ck,” and a “goddamn mess,” among other things. It was not a place to be if you dislike crowds or having your body pressed firmly up against the bodies of strangers, and vice versa.

The problem appeared to derive from the fact that the vast majority of the people who showed up for the parade descended on the site of its start, Preservation Hall, and its immediate vicinity, rather than spreading out over the course of the parade route. Everyone, it seemed, yearned to be a participant in the parade rather than a spectator — which shouldn’t come much of a surprise to anyone, really — and they wanted to be a part of it from the very start.

The New Orleans police, arguably the nation’s best law enforcement unit when it comes to controlling large crowds, appeared to be nowhere to be found. Via sirens blaring in the distance, they were heard but not seen. As a friend put it, “This is like Mardi Gras, but without the planning and execution.” No one seemed to know what to do.

Meanwhile, people climbed atop metal garbage cans and vehicles that were stranded in the street in order to get better views. Those lucky enough to get access to French Quarter balconies looked down on the crowds in the streets like royalty amused to look down upon an unruly peasantry. Some even perched upon rooftops for a better view of the madness down below. Luckily for those who turned out, everyone remained civil, aside from an occasional asshole getting a little too aggressive and pushy when making their way through the crowd.

The Arcade Fire/Preservation Hall group attempted to push forward through the crowd in the direction of Royal Street. It was an effort that would prove futile. Eventually they all gave up, disbanded, and weaved individually through the crowd to Royal, where they were able to reassemble. Butler, wearing a pinkish suit and wide-brimmed black hat adorned with a flower arrangement on its left side, smiled and gazed wide-eyed upon the assembled crowd, seemingly delighted by the anarchy and disarray he found himself in the midst of. 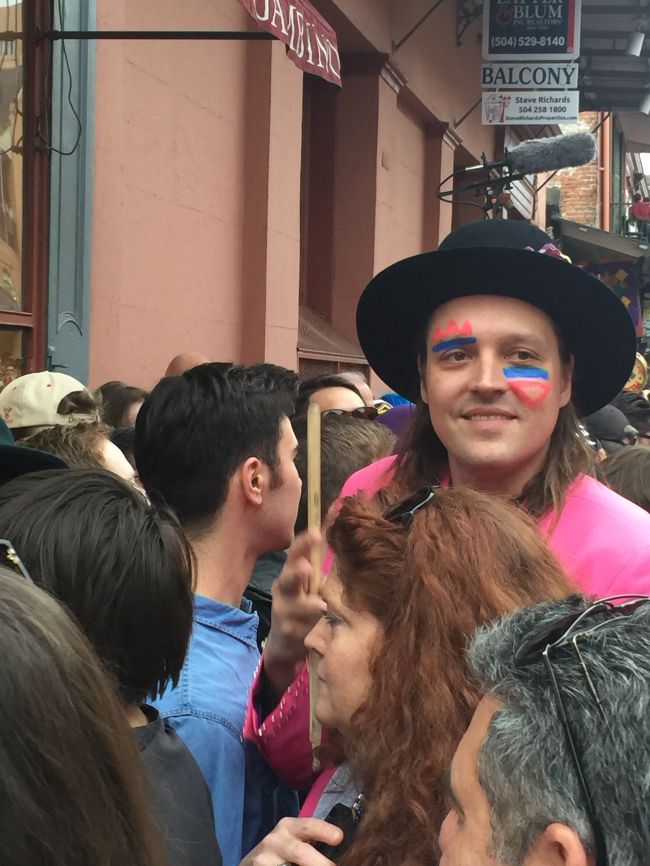 Once the NOPD finally showed up to clear the streets a bit for the band, some semblance of a traditional second line began to take shape. The Preservation Hall band played and Butler sang Bowie songs through a red electric megaphone, while the crowd sang along.

After a slow march to the Mississippi River and around the French Quarter, it was dark by the time the band reached their final destination. After arriving at One Eyed Jacks, Butler went up to the venue’s balcony and DJed a bit for the crowd, which included a man dressed as a sparkly silver unicorn who went around asking strangers, “Do you have any mushrooms you’d like to share with me?”

Not long after the parade wound down, the skies opened up and rain began to pour down from the sky. Drenched Bowie appreciators, some with Ziggy Stardust makeup running down their faces, could be seen filing out of the French Quarter in all directions.

All told, it was a delightfully peculiar, elaborately costumed, beautiful mess of an afternoon/evening in the French Quarter, one that the man it was inspired by probably would have enjoyed the hell out of.