In Honor Of Adam ‘MCA’ Yauch, Here Are 5 Of Nathaniel Hornblower’s Finest Moments 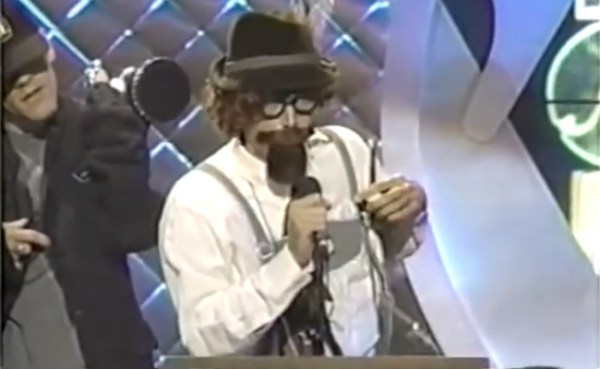 On May 4, 2012, the world lost one of the illest rhymers and most creative forces it ever had in Adam Yauch, better known as MCA from the Beastie Boys. But in addition to his incredible skills on the mic, he was an excellent director as well, often directing several of the Boys’ music videos under the assumed personality of his “uncle,” Nathaniel Hornblower.

MCA’s musical legacy is well-documented. So in honor of one of hip hop’s greatest legends, here are five overlooked moments of Switzerland’s own “Nathaniel Hornblower” at his very best.

The Robot Vs. The Octupus Monster Saga

The iconic video for the Beasties’ 1998 hit “Intergalactic” actually has an extended cut! In their loving tribute to Kaiju films, the Beasties filmed in two of Tokyo’s busiest train stations to make the video. Of course, the monster fights were probably not shot there, but still, we would never question MCA’s dedication.

Speaking of dedication, maybe he was a bit overly dedicated back in the day when the Beastie Boys’ video for “Sabotage,” directed by Spike Jonze lost to R.E.M.’s “Everybody Hurts.” Nathaniel stormed the stage and claimed, among many other things, he had the original idea for Star Wars. Honestly, if anything we need *more* stage crashing these days. #KanyeShrug

Nathaniel Hornblower Runs Into The “Adams”

Similar to Andy Kaufman with his Tony Clifton character, Nathaniel was played by more than one person, if need be. In this case, from the short film A Day In The Life Of Nathaniel Hornblower, David Cross does the honor. The short was a surprise intro to the Beastie Boys’ fan-filmed concert movie Awesome, I F*ck*ng Shot That.

Fight For Your Right Revisited

To commemorate the 25th anniversary of “(You Gotta) Fight For Your Right (To Party),” a song the Beasties maintained was a joke lost on some fans, MCA directed a 30-minute sequel to the video for “Make Some Noise.” Cross again appears as Hornblower in the cameo-filled clip with stars like Will Ferrell, Seth Rogen, Danny McBride, Elijah Wood, Rashida Jones, Adam Scott, and many more.

This animated video, not as well known in their canon, was unique in that every frame was hand painted. The art for the clip was so impressive, it actually was invited to tour with the International Tournée of Animation. The house responsible for the animation was Klasky Csupo, perhaps most famous for Rugrats, Duckman, and Aaahh!!! Real Monsters.