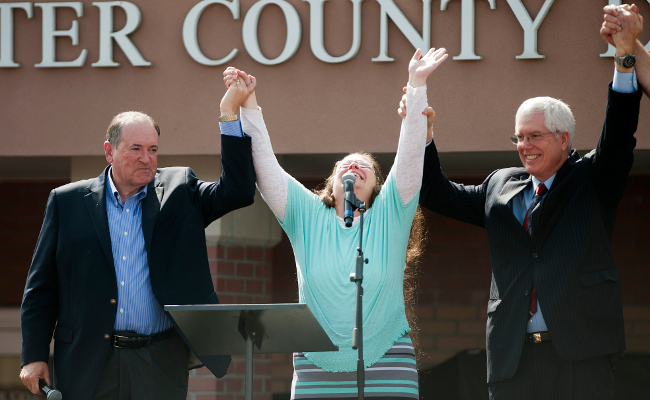 Oftentimes, we hear musicians grouse about a politician using their song. Usually, that politician is Donald Trump, but that’s not always the case. However, for once, a politician is going to be paying for playing a song without permission from the artist. Mike Huckabee is having to shell out $25,000 for his use of Survivor’s “Eye of the Tiger.”

You may recall Huckabee playing the song during a rally for Kim Davis, the Kentucky county clerk who was jailed for refusing to provide marriage licenses for same-sex couples. It was not exactly a glorious moment in American political history, and members of Survivor expressed their displeasure. Then, they sued for copyright infringement, because Huckabee had not paid for the rights.

Huckabee then came to a confidential settlement with Rude Music, which is owned by Survivor guitarist, and co-writer of “Eye of the Tiger,” Frankie Sullivan. The payment came to light after a payment to Rude Music for $25,000 was listed as a “legal settlement” for “copyright infringement.”

This is not the first time a politician has run afoul of Survivor for using “Eye of the Tiger.” Newt Gingrich faced a similar fate as Huckabee back in 2012, when he was sued and settled for his use of the song, whereas Mitt Romney got off with a warning in the same year. Don’t mess with Survivor, politicians. They’ve got, well, you know…