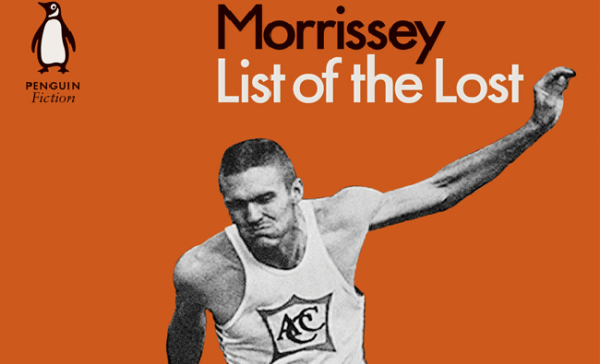 Morrissey’s first novel List Of The Lost is out today in a slew of places that are not the United States. But that merely gives us ‘murcans time to brace ourselves for what might be the most satisfying hate-read this side of the Bulwer-Lytton Contest. The reviews of the book are not good, as might be expected when you’re talking about a novel centered around a relay team that’s been cursed by a demon.

Yes, you read that right.

Here’s Morrissey’s own summary of the book via fansite True To You:

“The theme is demonology … the left-handed path of black magic. It is about a sports relay team in 1970s America who accidentally kill a wretch who, in esoteric language, might be known as a Fetch … a discarnate entity in physical form. He appears, though, as an omen of the immediate deaths of each member of the relay team. He is a life force of a devil incarnate, yet in his astral shell he is one phase removed from life. The wretch begins a banishing ritual of the four main characters, and therefore his own death at the beginning of the book is illusory.”

Confused? Apparently, the book is no better. Check out this passage excerpted by The Guardian that is, theoretically, about two people having sex.

“Eliza and Ezra rolled together into the one giggling snowball of full-figured copulation, screaming and shouting as they playfully bit and pulled at each other in a dangerous and clamorous rollercoaster coil of sexually violent rotation with Eliza’s breasts barrel-rolled across Ezra’s howling mouth and the pained frenzy of his bulbous salutation extenuating his excitement as it smacked its way into every muscle of Eliza’s body except for the otherwise central zone.”

“Bulbous” has no business in any description of sex, and barrel-rolls shouldn’t be involved unless you’re doing the deed with Peppy Hare. Regardless, we can’t wait to get our hands on a copy.