Welcome To Sierra Blanca, Where Rock Stars Get Busted For Drugs

If you’re traveling westbound through Texas on Highway I-10, it’s likely that the only thing slowing you down is the plumes of desert dust the preceding car is exhaling. But, if you’re traveling eastbound on the interstate, well, you have the law to contend with. The Sierra Blanca Border Patrol checkpoint has gained a bit of notoriety these past several years for its efficiency in not only catching criminals, but famous criminals. Since around 1974, the checkpoint resembles an airplane hanger baked twice in the Texas sun, and in 2003, it was annexed into the Department of Homeland Security with a goal to keep contraband and illegals out of the country.

Interstate 10 is the only major interstate that cuts across the Texas landscape, and the road itself extends from Santa Monica, Calif. to Jacksonville, Fla., and it’s one of the quickest ways to get from the West Coast to the East Coast. The Sierra Blanca, Texas checkpoint resides on the eastbound side of a lonely stretch of road about 85 miles east of El Paso and 20 miles from the Mexican border in Hudspeth County. The desert town has about 600 residents, but you wouldn’t know that if you spent the day at the checkpoint: It sees 17,000 vehicles per day, with 2,500 of those per year leading to an arrest, with 10,000 pounds of narcotics seized per month (officials are wary to compare it to other checkpoints for fear of giving criminals more info than they need). One several-week span in 2013 turned up more than $1 million worth of substances, but it’s not just your everyday, common citizen getting detained.

In November of 2010, Willie Nelson’s tour bus was stopped at Sierra Blanca when the faint odor of marijuana emanated past the bus’ doors. Six ounces of weed were found. Nelson was booked into the Hudspeth County Jail, but released that same day after posting bail. It’s rumored that he sung a song in court in order to reduce his sentence, but he told a reporter he ended up paying a $3,000 fine.

In 2011, Armie Hammer — of The Social Network and The Lone Ranger fame — was busted with pot cookies and a brownie. He spent 12 hours in lockup — county officers had no idea who he was before posting a $1,000 bond. 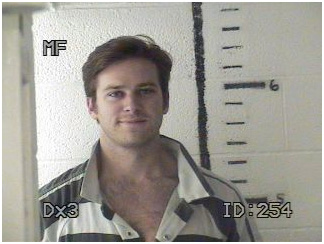 On Jan. 7, 2012, Snoop Dogg was entangled in the checkpoint’s net when a dog (irony) found .13 pounds of weed in his tour bus. Snoop claimed ownership.

On Sept. 19, 2012, Fiona Apple was thrown in the Hudspeth County Jail following a discovery of hashish.

In October of 2012, Nelly’s tour bus was detained after Border Patrol officials seized heroin and marijuana, which one of Nelly’s passengers claimed.

It all adds up to the Border Patrol station becoming loosely known as the “Checkpoint of the Stars.” Because of the dangers of getting caught with pot or perhaps something more damning, tour bus drivers have been telling their passengers to avoid bringing substances on the trip, lest they want to travel a different route that could add hours onto their travel time.

The checkpoint is so famous it has a Yelp page, in which someone was nice enough to give them two stars for “…Being cool enough to lock me and my girlfriend up in the same cell, which we shared with 2 Mexican men and a little boy.” Also, the Hudspeth County Sheriff’s department — in which most of the cases accrued at the checkpoint are transferred to — has its own website that looks like a prop in a Tim and Eric sketch.

Here’s how it works: You’re first asked if you are a U.S. citizen in the primary lane. A narcotics dog may or may not take a few laps around your vehicle to see if anything is initially sensed while your license plate is scanned. If no probable cause is warranted, you’re sent on your way in a brief manner. There are a lot of cars that need to get through, so the process has to be thorough yet quick. “You have five to 10 seconds to determine if someone has something suspicious about them of their vehicle,” Agent Abel Meza told the El Paso Times.

If the dog or the Border Patrol officer does sense something, you’re sent to a secondary lane, everyone is asked to exit the vehicle, and a proper search commences that includes radiation scans for weapons. The officers are professional: Al Reinert of Texas Monthly described his experience in which the agents even refolded his clothes properly and placed CDs back in the proper jewel cases, something he hadn’t even done himself. If a substance is found, you’re remanded to the checkpoint office where your fingerprints are taken on a digital device and your photo is run through the national databases to check for priors. Depending on the offense, you may or may not be transferred to the Hudspeth County Jail for further processing (this is where the famous mugshots were taken).

The Sierra Blanca (it translates to “White Mountain”) checkpoint isn’t just for finding illegals and substances though. Five miles from the checkpoint station is the official headquarters that contains training areas — for officers and the narc dogs — horse stables, classrooms, medical facilities, and even a helicopter pad. Sometimes, people are found wandering the desert without food and water; they are taken here for treatment. For emergencies, EMT vehicles are also available and several agents are trained EMT’s. There are 650 agents that are assigned to the sector, 40 of which are usually on duty at one time at the checkpoint.

As mentioned before, the checkpoint has an official relationship with the local sheriff’s office, but relations have not always been smooth. In 2013, citing a lack of federal funds, Hudspeth Sheriff Arvin West began turning away federal drug cases that originated at the local checkpoint. Sierra Blanca turns more than 200 cases a month to the sheriff, but the government had ceased providing compensation for the “detention costs” in May of that year. For a short time, motorists were given a free pass through the checkpoint if they had narcotics on them (as long as it wasn’t a huge amount that warranted a DEA investigation). West would later backtrack and begin accepting drug cases if they were over the felony level.

As if the deck wasn’t stacked enough against a passerby with illegal substances, the Hudspeth County Sheriff’s office and the Border Patrol have a secret weapon: Steven Seagal. A few days a month, you’ll find him scouring the area as a reserve sheriff’s deputy. That just adds another layer to the “Checkpoint of the Stars” nickname. At Sierra Blanca, celebrities are on both sides of the law enforcement divide.