Zac Efron’s EDM Movie Apparently Gets A Lot Wrong, But Does It Nail One Key Moment In The Trailer?

If you haven’t seen the trailer for the newest Zac Efron vehicle We Are Your Friends, here’s the tl;dr version: It’s Rocky, but with DJing as the backdrop instead of pugilism, with the plastic-bag guy from American Beauty as Mickey, and Emily Ratajkowski as Adrian, except we’d probably rather watch her take a typing test or make toast before we’d like to watch her act. It’s been referred to as Swingers for millennials, yet uses a song from 2002 as the title of the film and the score to the trailer. It has also turned off the EDM community almost as much as when one of them hears their community referred to as “EDM.” 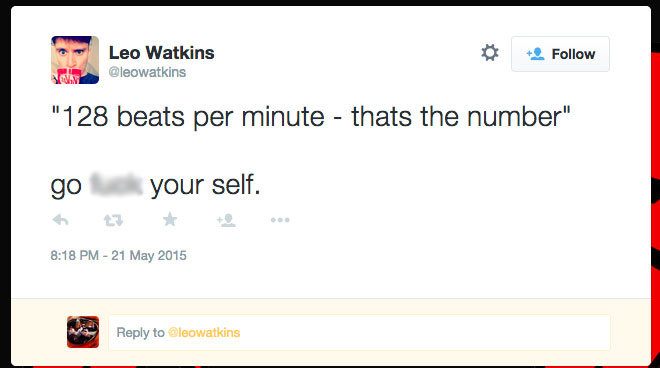 That last tweet is in reference to the climax of the trailer, in which Efron’s character explains the mystic science behind the golden tempo when DJing.

“It’s the DJ’s job to get the crowd out of their head and into their bodies. Once you’ve locked onto their heart rate, you start bringing them up, song by song — 128 beats per minute, that’s the magic number.”

But is 128 bpm truly the “magic number?” With the help of Serato, we’ve taken a thorough list of pop and dance songs into our lab, and attempted to get some definitive answers on the question by analyzing several songs that clock in at 128. Let’s figure out if any of these songs might be in the film; if not, what kind of party they might fit at; and if 128 truly could be the creamy center of the DJ world.

A Number of Names: “Shari Vari.” So far, checks out. This 1981 jam seems to make these Soul Train knockoff dancers get down. Unfortunately, you probably won’t hear anything this fun in We Are Your Friends because, judging by the trailer, music supervisor Randall Poster bought an Ultra CD at a pawnshop and quickly had his assistant database the licensing rights.

LCD Soundsystem: “Disco Infiltrator.” There’s a 90 percent chance this song is featured in this film. It was white-hot when the title track of the movie was popular, which was probably Poster’s halcyon days of post-electroclash club partying. If you weren’t finding out which color of cotton American Apparel scarf was popular that week by logging onto Friendster, you weren’t “rad” back then.

Martin Solveig: “Hello.” This is probably in this movie because it’s a crossover hit that’s right in that sweet spot of irrelevance that Hollywood loves to use. Furthermore, it probably only costs about $2,000 to license now that it’s run its course of significance with the public.

Mat Zo and Arty: “Mozart.” Exactly the type of “EDM” that would be played at these kinds of L.A. parties (at least two or three years ago, it would have), but considering that the song is far newer than 13 years old, and the above critical tweet from the artist behind it, it’s likely not going to happen.

Ben E. King: “Stand By Me.” This is for sure a banger if you’re DJing a wedding and need something to follow up the bride and groom’s first dance (which is now required to be the Magnetic Fields’ “Song of Love” everywhere in North America).

Cole Porter: “You Do Something To Me.” OK, we’re still in the clear here. This could totally start a raging party, as long as that party has a curfew of 8 p.m. and it’s an afterparty for a nine-hole charity event in Palm Desert.

Frank Black: “Brackish Boy.” Off the first post-Pixies solo effort, this song has no drums in it, and apart from “In the Summertime” by Mungo Jerry, songs usually need some sort of beat to get a party started, unless you’re doing fat rails in Steve Albini’s rumpus room and it’s 1995.

Gerry Rafferty: “Right Down The Line.” So, your girlfriend’s single mom is having an office party for her and all the Cathys and Lindas who work in cubicles next to her, and she heard you’re a DJ, so they blow the entire budget on paying you to wheel in your gear and pump the jams under the fluorescent lights of the conference room. Too bad they didn’t tell you it was BYOB, or else you would slosh your plastic cup in the air, staining the ’70s carpet with them while they air guitar and ask you to play it again… which you should.

Bruce Springsteen: “Blinded By the Light.” Just imagine the smug look you can pull off in front of a thousand candy ravers when you drop in this OG jam out of the newest Joy Orbison banger. Minds will be blown about how you not only had the massive balls to play something not on the Beatport Top 100, but also that you have such deep “crates” that you knew “Blinded By the Light” wasn’t originally by Manfred Mann.

The Sweet: “Little Willy.” Millennials will love this. It’s currently trending on Snapchat.

Toronto: “Your Daddy Don’t Know.” If you’re DJing to an afternoon car show full of Steve Coogans in Saxondale, you’re going to get a mighty fine reaction. Rock ‘n’ roll dads’ hearts beat at 128 when this is on.

Mohammed Rafi: “Jaan Pehechaan Ho.” Start the party with this jam, whether you’re DJing one of those Indian weddings that lasts for days, or a room full of aging hipster women who still own their copy of Ghost World on VHS.

Petula Clark: “Downtown.” If there was ever a song that’ll make Emily Ratatouille drip sweat (and other juices HI YO!) and crave your penetrating beats, it’s this. The magic number, 128, makes the women want you and the men want to be you. Remember the first time you heard Flume drop this at that field festival you attended, where you hippy flipped acid and molly in that Port-O-Potty with that girl who turned out to be underage? Feels so good being part of the Yes Generation, y’know?

Conclusion: Well, you’re right, We Are Your Friends… 128 beats per minute is definitely the magic number. Now, somebody go out and make a flaming mixtape with this list, then sit back and watch the DJ career come straight to you.