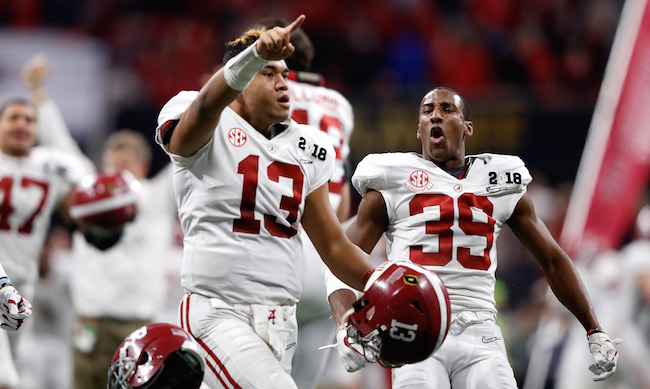 Alabama was held scoreless in the first half of the national championship game in Atlanta on Monday night as Georgia controlled the opening 30 minutes to take a 13-0 lead into halftime.

Georgia’s true freshman quarterback Jake Fromm was dealing in the first half after an early interception, and with sophomore Jalen Hurts struggling to get anything going, Nick Saban made the decision to go to his own true freshman signal caller and tossed Tua Tagovailoa into the fire. Saban was quickly rewarded for that decision with a touchdown drive led by Tagovailoa in the third quarter, and from there, they rode the true freshman to an incredible comeback.

He had his freshman moments, most notably eating a horrible sack on the first play of their overtime period, down 23-20. However, after taking the 16-yard sack, he quickly redeemed himself with an absolute dime to Devonta Smith (another freshman) for a 41-yard touchdown to give Alabama yet another national championship.

Tua Tagovailka went from sitting the bench to throwing this dime to win a #nationalchampionship pic.twitter.com/eVYPPzVf0e

ESPN’s coaches film room (which is the best way to watch the game by a lot) erupted at the play and couldn’t believe the blown coverage on the back end by the Bulldogs.

The back angle shows how the freshman manipulated the safety to create so much space for the go route on the backside and the easy pitch and catch for the touchdown.

Watch Tua look off the safety. Then the arm. pic.twitter.com/CwioxhQ2Er

The Tide found themselves in overtime after a furious second half comeback tied the game, but they should’ve had the win in regulation had it not been for the bizarre decision to play for a field goal with a kicker who already had missed a short kick badly in the first quarter. Alabama chose to run the ball and not risk a turnover late, leaving them with a relative chip shot, but with the pressure of a national championship win on the line, kicker Andy Pappanastos yanked the kick well left of the uprights.

The field goal is NO GOOD! The #NationalChampionship goes to OT tied 20-20! pic.twitter.com/87q0s35gcW

The game was an instant classic and showed the incredible depth of Alabama as they leaned not only on Tagovailoa in the second half, but also true freshman running back Najee Harris, who had six carries for 64 yards. That first touchdown drive led by Tagovailoa was sparked by one of the most incredible scrambles for a first down, which will undoubtedly go down in college football lore after the comeback finished with an Alabama win.

That was how Tagovailoa announced his presence on the scene and from there he threw for 166 yards, three touchdowns and one (very bad) interception and rushed for 27 more yards. His game-tying touchdown pass on 4th-and-4 was a product of great protection, him not panicking and a little divine intervention in the form of Calvin Ridley streaking into the picture to snag a pass that was almost assuredly not meant for him.

This is the type of throw that you only see in movies. My God pic.twitter.com/zPkafDAv2W

The performance of Georgia’s true freshman quarterback shouldn’t go unnoticed either, as Fromm threw for 232 yards and a touchdown, but his second interception, that bounced off a lineman’s head and up into the air, proved costly and because this is football, a great performance in a loss is destined to be buried. The best news for college football fans (or at least Alabama and Georgia fans) is that both of these quarterbacks will be around for two more years and could lead to more great duels.