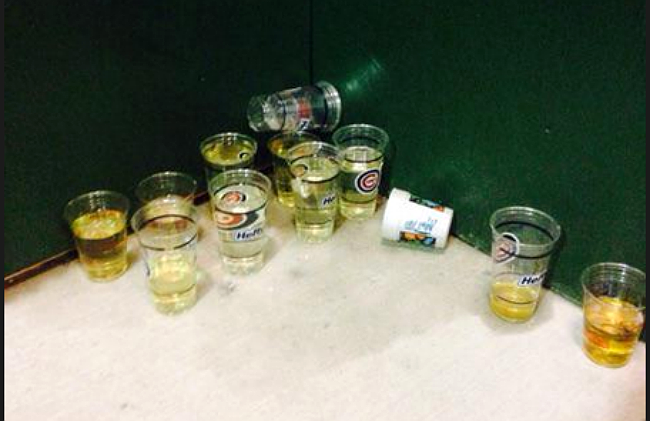 The Cubs lost their season opener to the Cardinals, 3-0, on Sunday night, but worse then the team’s performance on the field was the bathroom fiasco fans in attendance had to endure. Chicago is in the middle of a massive renovation of Wrigley Field, and while construction is in progress, some of the bathrooms have been forced out of service.

The result: Cups full of piss and lines that took innings to navigate.

Our cup runneth over! Yuck! RT @cubbies2014: @Cubs this is how bad the bathroom situation is @ Wrigley…. pic.twitter.com/jDierQWTDD

From a friend at wrigley. These are the lines for the bathroom. Ouch. Looks like the renovation hasn't gone so well. pic.twitter.com/heeUH2Rdab

A team spokesperson apologized to fans via an email to NBC Chicago:

“Opening Day at Wrigley Field has always brought challenges with wait times and tonight was particularly extreme. […] With 35,000 fans showing up in the ballpark tonight, we were simply not prepared to handle guests during peak periods. We have high standards for service and we missed the mark tonight.”

The team says they will install portable toilets in the stadium before the Cubs’ next game, which is Tuesday night.

But hey, at least that massive new jumbotron looks great!