Tampa Bay Lightning forward Tyler Johnson got hit with some bad luck — and a puck — during warmups prior to Friday’s Eastern Conference Final Game 4.

During the pregame skate, a shot from the Lightning’s Jonathan Drouin ricocheted off the post and struck Johnson straight in the face. The unfortunate bounce split Johnson’s upper lip pretty good and he immediately headed off the ice, leaving his status in doubt.

Fortunately, he was able to get fixed up in time and returned to play in the game, though he had to wear a full cage and looked not-so-pretty. 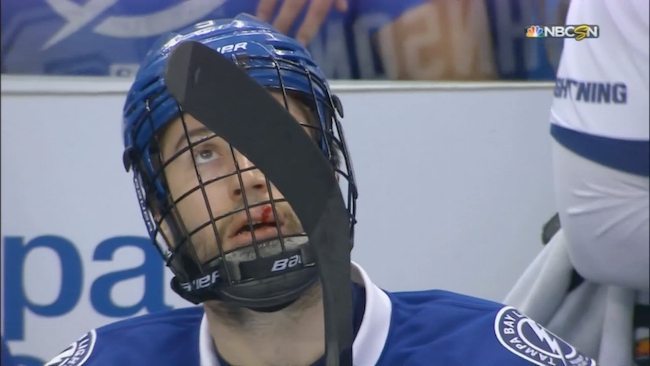 That’s certainly some tough luck for Johnson, but at least he was still able to take part in the game. Also, at least it wasn’t his own shot that bounced back into his face. If that were the case, he’d probably be finding himself on plenty of Most Embarrassing Sports Injuries lists.