The few who count as diehard fans of USA Network’s Suits might be feeling a little uneasy about this season so far. The writing and the storylines have not been good, and I don’t say that relative to prestige dramas. I say that relative to other seasons of Suits. For some reason, they have taken the best character on the show — Donna — and turned her into chattel, a piece of human property that Louis Litt and Harvey Specter continue to having pissing matches over, as though Donna has no say in her own affairs.

That problem is compounded by the fact that Harvey — who we are often told has incredibly large testicles* — is suffering panic attacks, not because of some grave danger in his life, and not because there’s a threat to his job, and not even because his paycheck keeps getting slashed, but because Donna left him. She didn’t die or anything. She didn’t even leave the firm. She just decided to become Louis’ secretary, a decision that has forced Harvey into therapy so that he can get medication to treat his panic attacks… because his secretary left. Don’t get me wrong: Donna is amazing, and easily the best secretary on television, but her defection hardly warrants repeated emotional breakdowns.

*Seriously, no episode of Suits is complete without an overly obvious pop-culture reference, at least one completely unnecessary utterance of the word “sh*t” just to remind everyone that this is cable, and at least one reference to the size of someone’s balls.

But this post is not about Donna. Or Harvey. It’s a celebration of the second best character on Suits behind Donna. This character is in at least five scenes an episode, is pivotal in every single case on Suits, and has the ability to strike more fear into opposing counsel than anything Harvey, Mike, Louis, or Jessica has ever said.

I speak, of course, of the manila folder and its instrumental role as the ballsiest plot device in all of television. 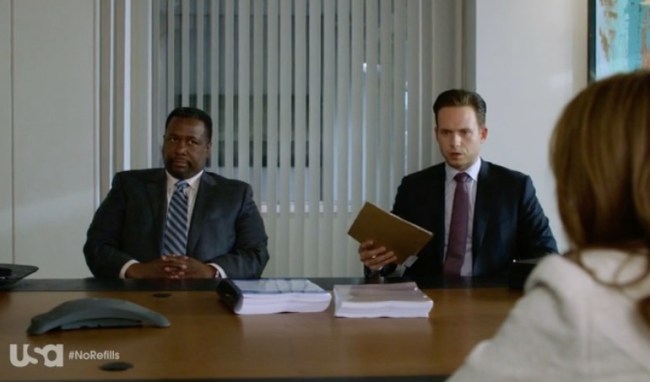 You may not often notice that manila folder, but once you become aware of it, it’s EVERYWHERE on Suits. No show on television features people carrying folders and or simple pieces of paper more than Suits. Everyone on Suits carries one around and at any time. They might hand it to someone else or throw it across the table and alter the entire course of a storyline.

It’s the ultimate prop. Need a last second savior during a motion hearing? Here comes the manila folder. Did negotiations break down during mediation? Bring on the manila folder! Want to stick the knife into opposing counsel? That Manila folder works EVERY time!

But here’s the best part: Ninety-five percent of the time, we never see the contents of that manila folder. It’s just a piece of paper with an offer or a deal or a game-changer, but on Suits, they almost never bother to explain what it is about the offer or deal that changed the game. Someone hands over a manila folder, the other guy opens it, sh*ts his pants, throws his hands up in the air, and game over! It’s the PERFECT deus ex machina. It’s the most amazing plot device in all of television because no one ever questions the manila folder. IT IS ALL POWERFUL. It’s GOD giving you the winning hand. It is a featherweight F*CK YOU that works single every time.

You want to know how has even bigger balls than Harvey Specter? The writers of this show, who have solved nearly every predicament on this series with a yellow piece of lightweight cardboard, and no one ever calls them on it. It’s pure genius. It’s the ultimate writer’s shortcut.