‘Game Of Thrones’ Theater: Imagined Conversations Based On The Promo Images For ‘Battle Of The Bastards’

This week’s episode of Game of Thrones is a biggie. That alone isn’t huge news, because the second-to-last episode of the season is almost always a biggie. But this time it’s a double biggie, because it’s the Battle of the Bastards, the long-awaited face-off between Jon Snow and Ramsay Bolton. Producers have said it’s the biggest battle they’ve ever done on the show, definitely in size and probably in cost (no exact figures have been tossed out, but it’s safe to assume it set HBO back way more than the average $10 million per episode price tag).

HBO didn’t release any official description at all, but we did get one in a roundabout way from their Emmy submission: “Terms of surrender are rejected and accepted.” What we can take away from that, I assume, is that we’ll get some sort of conclusion. Conclusions are good!

But since we don’t know much else, let’s just go ahead and have some more fun with the promo images. That feels like a good plan.

JON: They say people who live in glass houses shouldn’t throw stones, but really, like, you shouldn’t be throwing stones around your house no matter what it’s made of. You know?

SANSA: Well, I think what the saying means is that people who live in glass houses shouldn’t be throwing stones at other people’s houses, because when the other people throw stones back, it’ll do more damage.

SANSA: So when Ramsay attac-…

JON: Wait. So these neighbors are just running around and hucking stones at each other’s houses?

JON: What kind of lunatics throw rocks at their neighbors?

SANSA: Well, we’re literally about to go to war with people who live near us so mayb-…

JON: Nobody should throw stones. That should be the saying.

JON: Or maybe, “People who live in glass houses shouldn’t walk around naked.”

SANSA: Can we please focu-…

JON: Buncha people seein’ your willy and whatnot. 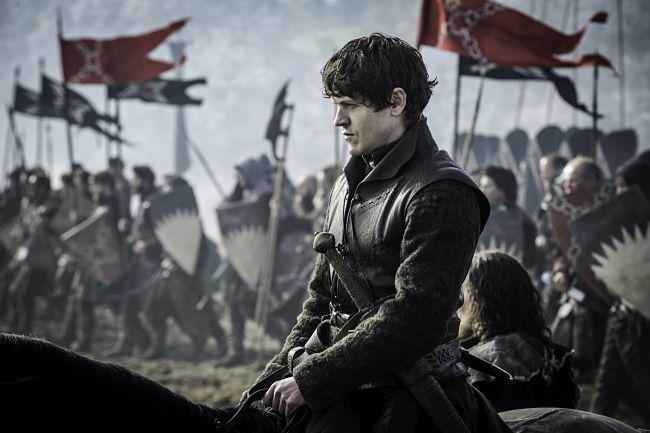 RAMSAY: [singing under his breath] … and I’ll take with me the memories, to be my sunshi-…

LARRY IN THE BACK ROW: Hey, so about this war. I was thinking maybe we coul-…

RAMSAY: [resumes singing] … my sunshine after the raaaaiiiiinnnnn.

DAVOS: And remember, men. It is not enough to just fight. You must fight today like you’ve never fought before. The odds are not in our favor. This is… [voice fades out]

DAVOS’ HORSE, A TEEN NAMED BECKY: [addressing audience] So it’s like, yeah, okay, I get it. Ramsay and Jon hate each other so they’re gonna fight. Whatever. I just don’t understand why we all have to get involved. I have things to do. I have a life. Just go have your little battle by yourselves and get it over with.

DAVOS: [voice fades back in] … and when you raise your swords, do it with purpose. Every motion matters, and we have no luxury of wasted effort. We must… [voice fades out]

DAVOS’ HORSE, A TEEN NAMED BECKY: [playing with her phone, scrolling through social media, just mashing away at the screen with her hoof] Oh my God, Grey Worm and Missandei are so adorable. They keep liking each other’s Instagrams. They’re totally gonna hook up. Totally. Wait, like, can they hook up? You know, because he doesn’t have a… you know. I wonder what happens when he gets excited…

TORMUND: Yeah, you know. War and such.

NED THE WILDING: Don’t you think it’d help if you got a little, I don’t know, fired up?

NED THE WILDLING: Hey, did you hear about Brienne and Jaime Lannister?

TORMUND: What? No. What?

NED THE WILDLING: I guess they met up again in Riverrun. I hear sparks were flying.

TORMUND: With that pretty boy?

NED THE WILDLING: Yeah, word is they have a bit of history, if you get my drift.

NED THE WILDLING: But, I mean, why wouldn’t she fall for him, right? He’s got it all: looks, money, power. Total package.