Do you ever get the hankering to watch an entire television series, but you don’t have the time to commit to a seven-season drama on Netflix? You’ve got a weekend free, and you’re in the mood to quickly bang out a series without losing 46 and a half hours to Breaking Bad or 72 full hours to Mad Men.

Then this post is for you. Here are the best Netflix shows you can binge-watch in under 10 hours (or, in some cases, even less). It’s binge-watching without the serious commitment.

Arguably the single best comedy in all of 2015, Unbreakable Kimmy Schmidt has the zany absurdist comedy of 30 Rock combined with the enthusiastic optimism of its lead, Ellie Kemper. A show about a woman who is rescued from a doomsday cult who starts life over again in New York City, Kimmy Schmidt features brilliant supporting turns from Tituss Burgess and Carol Kane, and a host of cool cameos from the likes of Kiernan Shipka, Jon Hamm and the show’s co-creator, Tina Fey. It’s an exuberant and infectious sitcom, and not just an easy show to binge-watch, but an impossible one not to.

The Elisabeth Moss series from Jane Campion is a slow burn, but it is an engrossing, incredibly well-acted mystery thriller about a missing, pregnant 12-year-old girl and the many secrets of a small New Zealand town. It is basically a better version of The Killing crossed with Twin Peaks that will pull you in, keeping you guessing the entire series, and then gut punch you with a twist that you will never see coming. The seven episodes are better meted out over two or three nights, because the heaviness can be difficult to take in one binge-watching session, but it’s definitely a series worthy of a single-weekend viewing.

The latest original addition to Netflix, Wet Hot American Summer is a companion series to the film, and in order to truly appreciate the series, you really do need to see the movie (add another hour and a half, and it’s still one of the shortest series on this list). It’s not comedy that everyone will appreciate, but if you love absurdist humor, Easter eggs, parodies of bad 1980s films and seeing some of the best actors in comedy all in one place — and playing into the joke with abandon — then WHAS is a necessary binge.

The beloved cancelled-too-soon series from Ted Griffin and Shawn Ryan is not only one of the best binge-watches on Netflix, it’s one of the best series, period. If you haven’t yet done so, check out the darkly comic, wonderfully structured, smartly acted private-detective series from part of the brain team behind The Shield, the screenwriter of Ocean’s 11, and Donal Logue. It’s a whip-smart blend of dramedy and mystery, and that nine hours and 45 minutes will melt away in no time.

A brilliant British sitcom, The Inbetweeners is a cross between The Wonder Years and American Pie, only far more filthy and hilarious than either one, yet it still manages to hit those poignant Kevin Arnold notes. It’s probably the best coming-of-age sitcom of the last 10 to 15 years. The series is also very, very funny, and spawned two movies based on the series, which were huge hits in theaters over in the UK (it also launched an MTV spinoff, which we won’t talk about).

Most of you are familiar — or at least should be — with the greatest cancelled-too-soon series of all time, Freaks and Geeks, but Judd Apatow’s other sitcom, Undeclared, often gets short shrift. It’s kind of like Freaks and Geeks reduced to a half-hour comedy and set in college. Undeclared was much loved and little watched, and features great early glimpses into the careers of Jason Segel, Jay Baruchel, and Charlie Hunnam before his Sons of Anarchy facial hair. Carla Gallo played the female lead, and you can still find her playing small supporting roles in every other Seth Rogen or Judd Apatow production (most notably, Neighbors), although the post-Apatow career of the other female lead, Monica Keena, hasn’t been as kind. 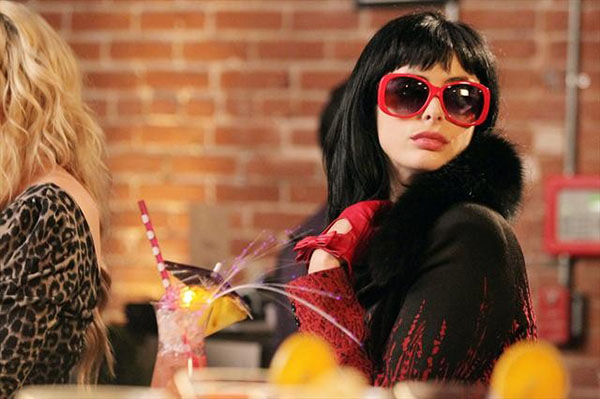 The hilarious, cancelled-too-soon series featuring James Van Der Beek as himself, and Krysten Ritter and Dreama Walker trading places throughout the series as the character you most want to gawk at for 22 minutes. We can’t say enough great things about Don’t Trust the B— and the best news is, the episodes that weren’t aired on ABC after the show was cancelled are available on Netflix now, so much of season two will be new to you, even if you’d been otherwise following the series before it was cancelled by ABC. This is pure sitcom candy, and you ought to be able to binge through it in a few days.

When How I Met Your Mother ended its run, the networks all rushed to find the next great rom-com sitcom, and as is often the case when the networks attempt to clone another series, they all failed. Scrotal Recall is the series that may finally fill that void. It’s a British sitcom from relative newcomer Tom Edge, and it’s about a guy who is diagnosed with chlamydia and must contact all his former lovers to inform them of the disease. If you’re not into rom-coms, however, don’t let the romantic elements dissuade you. It’s also a very raunchy, hilarious tour through a lot of sexual misadventures and escapades more befitting the title of Scrotal Recall. It’s a funny, sweet, and surprisingly great series, given the title. It’s also only six episodes (and the shortest series on this list), so it’s an easy one to bang out.

The original UK The Office mainstreamed Ricky Gervais’ awkward, uncomfortable humor and created a kind of Larry David show set in the workplace. Honestly, there’s still no better British sitcom than The Office, for the way it mixes relatable workplace humor and the occasionally sweet moment, not to mention the fact that it introduced us all to Martin Freeman. If you haven’t seen the original The Office yet, it’s practically required viewing for any so-called TV junkie.

Black Mirror is maybe the most clever and forward-thinking series on television, and it’s also incredibly good. Each episode is stand-alone, but they each revolve around the very real threat that technology and the future pose. Remember how The Truman Show or Idiocracy ultimately kind of portrayed our realities? That’s Black Mirror. The questions posed will probably be realities within five or 10 years. The series is often very funny, but it’s incredibly dark humor, and some of the plot turns are, uh, very twisted. They’re like Twilight Zone episodes set in the near future, where our iPhones, artificial intelligence, YouTube, and reality television are the biggest threats to our society.