Every Fine Grain Of Sick Sh*t: 5 Burning Questions We Have After ‘The Walking Dead’ Fifth Season Finale

After the strongest half-season to date, the fifth season finale of The Walking Dead divided audiences into two camps: 1) Those who felt immensely satisfied with the way the episode ended — with a killshot to Porch-Dick Pete’s head and the Morgan cliffhanger — and 2) those who were disappointed that the last seven incredible episodes had all been leading toward what they considered to be an anticlimactic finale.

I fall a little into both camps. I thought “Conquer” was an intense, gripping action-packed episode that had my heart in my throat on several occasions. Even though we predicted and assumed no major characters would die in the finale, showrunner Scott Gimple (who also wrote the episode) and producer Greg Nicotero (who directed it) still managed to make me fear for the lives of Daryl (in the car), Glenn (in the fight with Nicholas), and even Rick (when a handful of walkers invaded Alexandria). It’s the season finale, after all, and anything could happen, so the fear of the unpredictable ratcheted up the intensity and suspense of the episode.

On the other hand, when all was said and done, “Conquer” was ultimately a predictable, superficial success, and that high from the episode quickly wore off. It was great to see the return of Morgan, obviously, and Pete’s death got a resounding, fist-pumping “HELL YES,” but for a 90-minute episode, the plot really didn’t advance very much. We were finally introduced to the Wolves — and they were menacing, evil and driven by arbitrary malevolence — but we hoped to see a showdown between the Wolves and Alexandria in the finale and not see that pushed into Season 6.

In fact, except for the arrival of Morgan, not that much changed between where the episode began and where it ended. For that matter, it took eight episodes essentially for Rick’s camp to enter Alexandria and finally prove to them that they should be running the place.

Moreover, the situation with the Wolves felt a little like the fourth-season finale with The Governor: They let him survive only to spend the next eight episodes circling back to give us the satisfying conclusion to The Governor’s arc we hoped for in that finale. Let’s hope they don’t spend the next eight episodes teasing out the threat of the Wolves before the eventual confrontation.

We also know now more than ever not to buy into the promotional hype. Where was the Kleenex-grabbing, yell at your television moment that Norman Reedus had promised us? And where were the “sad losses” that producer Gale Anne Hurd had promised? It’s hard to call the death of Deanna’s husband a “sad loss” on the scale of losses in this series, especially when most of us don’t even know the name of the character other than he’s Deanna’s husband. And who were the other “sad losses?” Pete? Because that wasn’t sad at all. That was spectacular! But with a cast that’s already overstuffed with characters, and that has just added Morgan, you’d think they could’ve at least killed off a few minor characters like Father Gabriel or even Nicholas. What possible reason do they have for keeping Nicholas around any longer?

With that said, The Walking Dead did a tremendous job of doing what a great season finale should do: It made us anxious for next season. Unfortunately, we have to wait seven long months to get answers to these burning questions we have after the finale:

2. What changed Morgan? The answer to the first question might lie in Morgan.The last time we saw Morgan, he was a Looney Tune. He’d reached his own existential bottom, kicked through the floor of it, and was dancing around in the cuckoo basement. He was a crazy-old coot, and he nearly killed Rick. What changed?

Lennie James on The Talking Dead hinted that there was an intervening event, one that might explain why he transformed from a batsh*t recluse into a stick-wielding killer who sees the how precious life is. Morgan may be able to bring some of that wisdom to Sasha and Gabriel and help them to find the preciousness in life, as well. I do hope Morgan sticks around for awhile, too, but — given the Daryl problem — I doubt the camp is in need of another right-hand man to Rick. (Despite the antagonism between Rick and Morgan in the third-season episode “Clear,” didn’t you still really want Rick to run to Morgan at the end of the finale and give him a big hug?) 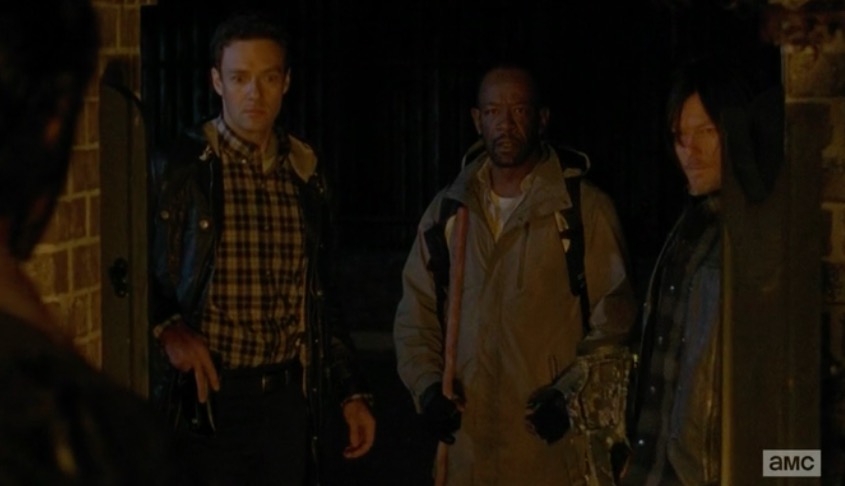 Can we talk about that shot of Morgan, Daryl, and Aaron for a second. Look at their eyes. There’s Morgan looking confused by hopeful at seeing Rick, Daryl looking very casual, as in, “That’s just Rick being Rick,” and then there’s Aaron’s face, the only one who seems to register the fact that Rick just put a bullet into a man’s head.

3. Why did Glenn let Nicholas live? For Glenn’s character, this was a humane but troubling development. While Rick is trying to toughen everyone up and make them ruthless survivors, Glenn can’t find it in his heart to kill Nicholas, who had repeatedly tried to end Glenn’s life. GLENN KNOWS. He’s the one who tried to encourage everyone to go back to Terminus and kill Gareth, and their failure to do so cost them Bob’s life. And now he’s letting Nicholas live? Alexandria has gotten to him. He’s gotten soft. That’s never a good omen for a character.

4. Will there be a Richonne/Jessie love triangle? I gotta say, when Michonne gave Rick that “I’m always with you” speech, I finally felt that connection the Richonne fans have been losing their minds over. There was something sweet and angelic about the way Michonne approached that conversation, something completely inapposite of what we expect from the katana-wielding badass that made me wonder if there could be a legitimate spark between those two. Rick telling Michonne that only “she could’ve talked him out of it,” also suggested she wields a lot of power over Rick. If these two come together, where does that leave Rick and Jessie, who is out a husband (and whose son, Sam, is out a father)? It’ll be interesting to see how that plays out, and as I expect everyone to remain in Alexandria for a long time, we could see more romances develop next season.

5. What should we expect from the Wolves? The wolves have been “not far” for eight episodes, and we now have to wait seven more months for them to finally approach Alexandria. How much of a threat will they really pose? During The Talking Dead, showrunner Scott Gimple delivered a message, suggesting that — after several seasons in which humans were the biggest threat — things will be upended again next season. Does that mean the Wolves aren’t the biggest threat to come? Because, to be honest, they don’t seem like a full half-season threat. They feel like a episode-long threat. Yes, they are evil, and what they are doing with the trucks full of zombies is profoundly depraved, but they don’t seem like the kind of villains who can “upend” the series or alter the dynamic. They seem like the kind of villains who can create a lot of havoc and be responsible for the deaths of a couple of characters, but nothing more than that. They remind me of Walter Hill’s Warriors. They’re into violence for the sake of violence, but at this point, Morgan could probably dispatch them all by himself.

I'm starting to suspect that Morgan is blind, and has memorized a copy of the King James Bible. #TheWalkingDead

“@WeGeekGirls: That scene with Morgan reminded me of the Book of Eli. #TWDFinale #TheWalkingDead” it did though – I thought he was blind lol

What happened to Morgan? Is he blind now?!? #TheWalkingDead

Morgan actin like one of them blind martial arts dudes rn

I’m glad that Abraham and Eugene finally resolved their differences, although it’s been so long since that plot strand has been picked up that I’d almost forgot that they were still at odds.

Given that the villains are “Wolves,” the red poncho was a nice nod to Little Red Riding Hood. 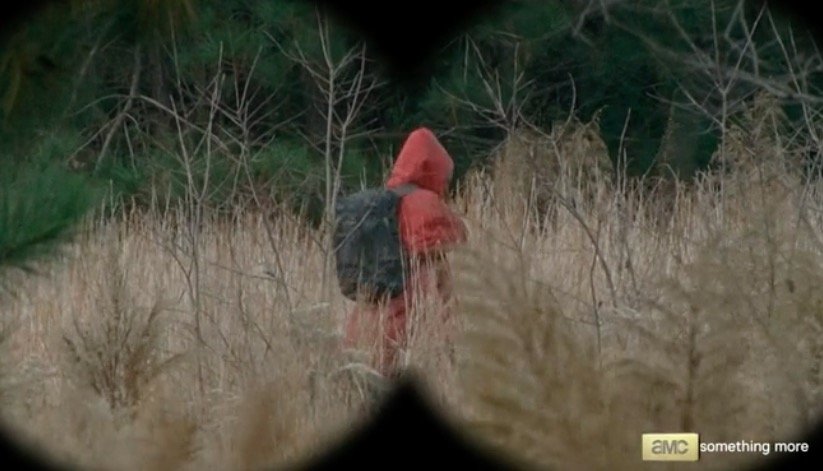 Abraham also had the speech of the night:

“There’s a vast ocean of sh*t that you people don’t know sh*t about. Rick knows every fine grain of sick sh*t and then some.”

I want this man to speak at my funeral. His eloquence is OFF THE CHARTS.

Finally, this right here is the creepiest, most chilling shot of the entire series: