Today is the 63rd birthday of voice actor Billy West, known for providing the voices of hundreds of animated characters over the years, including one Philip J. Fry, the 20th century man transported 1,000 years in time on Futurama. Over the course of seven seasons, Fry gave us plenty of great moments. He wasn’t the universe’s smartest guy (after all, he lacked the Delta brain wave), but he was a good-natured guy who always tried his best, even though he usually made a fool of himself. With that in mind, let’s look back on some of the moments and quotes that made us fall in love with Phillip J. Fry.

When he had a solution to a problem…but couldn’t quite articulate it:

His excellent comeback when someone told him alcohol makes you stupid:

When he said what all American consumers are really thinking:

When he gave us this incredible piece of inspirational advice:

When he described a pain we know all-too-well:

When he showed us how much compassion he has: 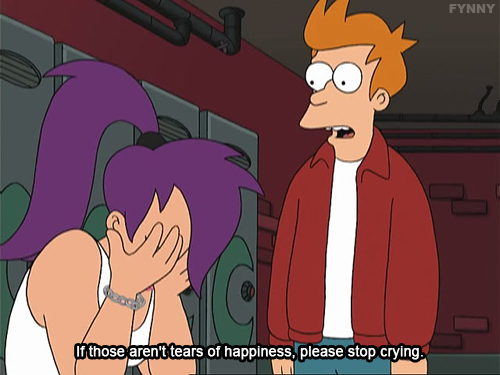 While he was not particularly idealistic, he certainly aspired to be:

He certainly had a healthy amount of confidence:

He was quite aware of his place in life:

He was a foodie of the highest order:

Finally, for all of his goofiness, and his lack of a delta brain wave, he could still be pretty romantic sometimes: