Are We About To See One Of The Best ‘Game Of Thrones’ Fan Theories Come True?

As Ian McShane dropped hints about back before season six of Game of Thrones started — leading to his fine “tits and dragons” comment when hit with criticism about spoilers — we might be seeing the Hound at some point in the near future. At least he did in so many words.

This pretty much sent the folks into a tizzy about a popular fan theory finally coming to life: The Cleganebowl. If you’re not aware of what that is, allow the folks at Know Your Meme to help out with the origins behind the meme:

George RR Martin published A Game of Thrones, the first book in the A Song of Ice and Fire series, which the HBO show Game of Thrones is based on, on August 6th, 1996. The first documented mention of the Cleganebowl theory online comes from an archived 4chan thread[1] started by an anonymous user on March 20th, 2013. 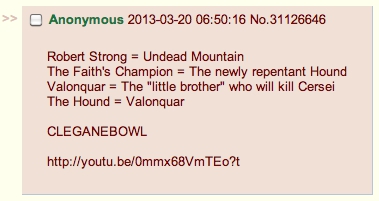 The basic idea is Sandor Clegane and Gregor Clegane will be facing off as opposing champions — one for The Faith as hinted at by McShane and the other for Cersei. We know the situation with The Mountain at this point, lumbering around and killing anybody who crosses Cersei and the crown. A huge zombie with little stopping him from bashing a head or two against a wall.

But we’ve yet to see The Hound in the show, despite McShane letting that cat out of the bag. It’s the folks over at Film School Rejects who give us a bit more confirmation at what we’re heading to later in the season. Not only should we expect to see a little trial by combat, but we know that Robert Strong / Zombie Mountain is going to be fighting for Cersei. According to Neil Miller, the path to the other combatant is in the episode titles:

And now in episode three, the show is confirming that the Lannisters expect a trial by combat. The show chose to place that revelation in close proximity to Arya in The House of Black and White, talking about how she did, but didn’t want The Hound to die. Reminding us that by the time she walked away from his badly broken body, we kinda liked him.

This week, the show released the episode titles for the sixth and seventh frames of season six. Episode 7’s title: The Broken Man. The title comes from a speech in A Feast for Crows delivered by Septon Meribald.

You can listen to the speech below and just imagine Al Swearengen spitting it out — sans c*cksuckers — during the episode. It should be glorious and will hopefully lead us to an epic showdown between brothers.

Now nothing is confirmed yet by the show or the showrunners. It just looks very good that we’re going to get this battle and have a theory become fact before our eyes. The only problem one could see is how both men will have changed from their previous form from earlier in the series. Does it actually count as the Cleganebowl if one guy is a zombie and the other is some sort of religious monk gravedigger? Who knows. This video is great, though.