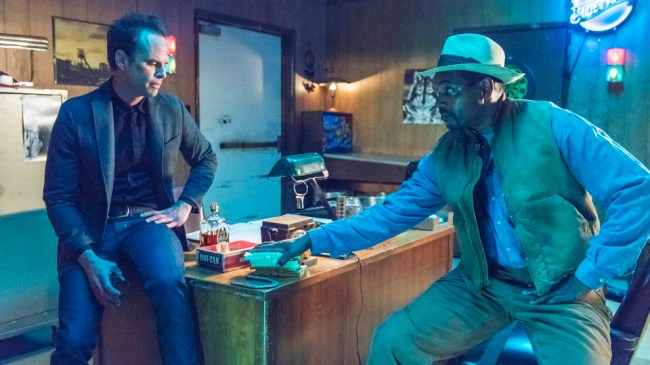 Last night’s episode of Justified was all about betrayal. Wynn continued selling out Avery and Katherine to ensure his freedom; Mikey turned on Wynn for violating his as-yet-not-fully-explained code; Boyd set up his henchman to take the fall at the vault so he and Ava could run free, and revealed Katherine’s involvement in the original plan just to fling salt in the wound he opened up by taking the money; Vasquez cut Ava loose as a confidential informant and left her blowing in the wind with death and prison as her primary options; and Raylan went and spilled the beans about it all to Ava, which resulted in…

Yup. This is happening.

Here’s the thing, though: If we’ve learned anything about Ava Crowder in five-plus seasons of Justified, it’s that when she feels cornered she tends to shoot people, often a member of the Crowder family. When you think about it that way, what happened at the end of the episode — which made me shout “HOLY SHIT” out loud when it happened — wasn’t quite as surprising. Boyd and Raylan, two dudes who pride themselves on seeing all the angles, probably should have seen it coming, and maybe they would have if they hadn’t been so busy trying to outsmart each other all night long. Especially Raylan, since he was the one who sent a skillet-swinging, rifle-toting wild card to a $10 million meeting right after telling her she was probably going back to prison.

But we all could have seen it, too. Everything about this season has been about getting us to the big Raylan/Boyd showdown we all assume is coming, and in our/my laser focus in anticipating that, we/I might have overlooked/underestimated Ava, just like the characters on the show. She’s been pushed and pulled and used and yelled at for the entire season by the two men who allegedly care about her, and last night she saw her shot and took it. Literally. Ava’s fed up, y’all.

The result of all of this, for now, is that Markham has nothing left but a backstabbing fiancee, my beloved potential Wynn Duffy spin-off is in jeopardy, Boyd is bleeding and broken at Raylan’s feet, and Ava — excuse me, Mrs. Ofay — has $10 million and a clean identity and a plan to run to God only knows where. She is your new big bad.

– I do like that even in a heavy episode about relationships falling apart and half of the show’s characters finding themselves in deep trouble courtesy of a trusted associate, Raylan found time to enjoy a vanilla ice cream cone. Boyd really needs to open that Dairy Queen.

– So let’s think this through: Raylan has Boyd on the ground in front of him, bleeding, but he has no money or gun or Ava to tie Boyd to any kind of RICO-style crime that Vasquez was yelling about. And Wynn, the only other active government witness who can give them anything, is presently indisposed. So unless the marshal’s office and/or police can flip Carl or his brother real quick-like, there’s really nothing solid to bring him in on. If we want to be very technical, he’s more of a victim than a perpetrator in the eyes of the law at this point.

– For those of you keeping score, this makes two consecutive episodes that a member of the Randolph family has plotted against Boyd in a way that both maims/kills him and prevents him from getting the money. Bad times for Boyd Crowder.

– DISCUSSION TOPIC: More upsetting betrayal, Ava shooting Boyd and running off with the stolen Markham money or Mikey turning on Wynn? I mean, it’s close, right? I feel like Mikey’s hurt him more, personally. Ava and Boyd were always teetering on the edge of disaster due to their constant scheming both with and against each other. Wynn and Mikey were doubles partners. I am not over this. I don’t know if I will ever be over this.

– Man, poor Dewey Crowe. Crapped on for his entire life and has his unsolved murder used as a pawn in Ava’s plan to escape. He can’t even catch a break in the afterlife. He’s basically Charlie Brown, but stupider and dead and his Snoopy is a wooden turtle dog.

– Heeeeeeeyyyy Limehouse. I don’t know if we’ll get to see him again in the last handful of episodes, but if we don’t, him strolling into Boyd’s bar and demanding the entire radio reward to help smuggle them out is a solid send-off. I coulda gone for one more shot of him menacingly butchering hogs with a knife as long as his arm, but you take what you can get. Related: I need to start more conversations with “What say we cut the small talk? I don’t like you.”

– On the subject of menacing criminal-types, one of the many problems with the show nearing its finale is that we won’t get much more of Markham’s new hired gun, Boon, and his very strong opinions about who should and should not be allowed to wear certain hats. Markham’s phone must be filled with the numbers of charismatic goons.

– Amidst all the double-crossing and backstabbing last night, the one person who displayed anything resembling integrity was Loretta’s scotch-chugging great-aunt, who justifiably called Markham a no-good peckerwood for hinting at getting rid of Loretta and got two bullets blasted into her for her trouble. There are two lessons we can take away from this interaction: One, everyone in Kentucky has a wild-haired hillbilly relative who you might be able to buy off with whiskey, so at least give it a shot. Two, uh, maybe don’t call crime bosses peckerwoods? I’m torn on this last one, actually. Peckerwood is a fun word. Might be worth it.

– My stupid pitch for a prequel titled Justified High just got way more interesting with this information that Boyd used to do liquor runs to Virginia as a teenager.

– Three episodes left. Things are getting intense as hell. I feel like this GIF is appropriate.