Seth Meyers was on The B.S. Report this week, basically just to chat with Bill Simmons about the 40th Anniversary Special of Saturday Night Live. Much of the conversation revolved around how wowed he was by all the celebrities in the room, how cool it was that Jack Nicholson finally agreed to be on the show, and a few other fun details.

For instance, he said that Michael Douglas did not rehearse any of his Q&A with Jerry Seinfeld (that Q&A was scripted by John Mulaney and Jerry Seinfeld), and he nailed it, except for one thing: He forgot to stand up. So, when he delivered the line, “I’m a sexual icon,” and his wife, Catherine Zeta-Jones (who was sitting next to him) gave that cutting, perplexed look, Douglas was sitting right in “the burn zone.” If he’d done his blocking right, he’d have been fine. 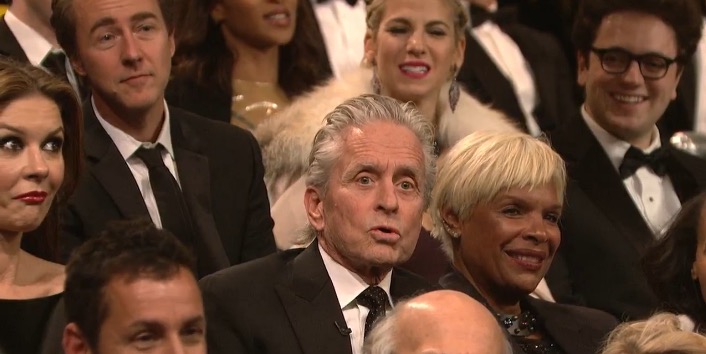 He also said that Dan Aykroyd had reached out to Lorne Michaels about Bass-O-Matic, which is how that came together, and the same with Mike Meyers and Dana Carvey, who had requested to do Wayne’s World.

He also said that the biggest disappointment of the night was that Dennis Miller didn’t show (Miller gave no reason), and his absence among the “Weekend Update” anchors was conspicuous.

But the best behind-the-scenes story of the night — besides Eddie Murphy bailing on “Celebrity Jeopardy” — may have been the machinations behind arguably the best moment of the entire episode: Bill Murray performing the “Lost Theme from Jaws.”

Turns out, that sketch has been in the making for over 35 years. Jim Downey had had the idea for it way back in the 1970s, and he’d never been able to let it go. Still, Bill Murray didn’t agree to do it until Sunday afternoon. In fact, it was never rehearsed on stage (although, it had been rehearsed in the dressing room a couple of times). Most amusingly, however, was how they managed to secure the rights from Jaws on such short notice.

Here’s how Seth Meyers explained it:

“Downey thought it was really important to have Jaws footage in the shot. I think Lorne thought it was distracting, which is great because even leading up to it, they were having an argument about that. Lorne’s like, ‘You can’t clear the footage,’ and Downey’s like, ‘Well, Spielberg’s here. Let’s just ask him.’ There was no need to go through a middle man on this night based on who was in the room.”

How incredibly fantastic is that? There was so much star power in the room that night that when they needed clearance, they just asked the director.

“I certainly understand that people were left wanting more. We didn’t quite know what he was going to do. All of us wanting a little bit more is how all of us are going to live out the rest of our days. He came to rehearsal. He couldn’t have been nicer. You really understood that he still watches and loves the show. It’s one of those weird things. I can’t imagine how hard it was. What could he have said after that incredible intro from Chris Rock. That was probably a very moving moment for Eddie, and being back there was already a big step for him. For me, it was still worth it to have him there.”

One final note: Everyone came to the after party, Meyers said, except Larry David.

Via The B.S. Report