As part of the lead up to the final episodes of Mad Men, AMC is running a series of tribute videos from various celebrities, including David O. Russell, Gary Oldman, Colin Hanks, and Kevin Pollak, among others. One in particular that stood out was Sarah Silverman’s tribute, which wasn’t so much a tribute as it was a lamentation on a missed opportunity.

Back when the first season of Mad Men was ramping up, Jon Hamm appeared on Silverman’s show as a cable guy. 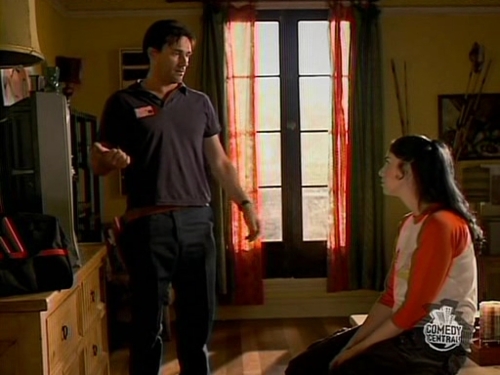 While on the show, Hamm mentioned a role in his new series, Mad Men, that he thought would be perfect for Silverman, and as you can see by who they cast (Sons of Anarchy’s Maggie Siff), she certainly would’ve fit the part of Rachel Menken:

However, she told Hamm that she already had her own show, which she was the star of. Why would she want to do a role on his show, and that — as she explains in the tribute — is how “she blew her chance” to be on Mad Men and, consequently, make out with Jon Hamm.

Silverman eventually got her chance to appear in a period drama, though. Last season, she played the lover of a former prostitute on Showtime’s Masters of Sex, and while she didn’t get to make out with Hamm, she did get to mess around with Annaleigh Ashford while her boyfriend, Masters of Sex star Michael Sheen, presumably got to watch.