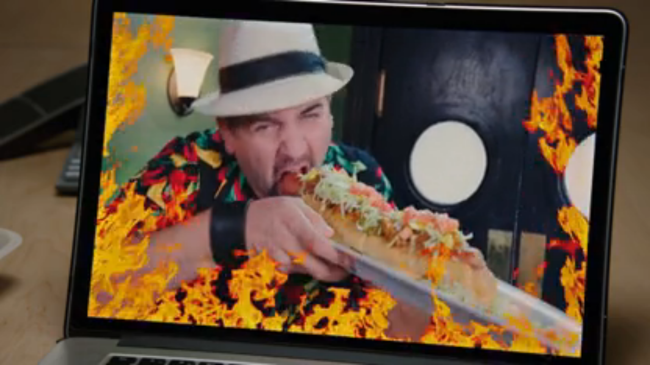 Full disclosure: My entire experience with the television show Bones consists of half-watching reruns that run on TNT in the afternoon (working from home is weird). That said, if this excerpt from EW’s recap of last night’s episode is accurate, I may need to begin paying attention a little more closely.

TV personality Chili Reuben, of the hit show Gettin’ Spicy with Chili Reuben, is found murdered at a fitness boot camp. If you hear “Chili Reuben” and think “Guy Fieri doppelganger,” you are correct. Chili was the kind of celebrity chef whose job entailed going from diner to diner and eating a pizza slice on top of a burger.

Unfortunately, we don’t see much of Reuben in the episode since he’s been murdered. An investigation ensues. We learn that Reuben drives a vehicle he affectionately refers to as a “Spice Mobile,” that he enjoyed sleeping with waitresses while alive, and that he was a habitual drug user.

Now, to be fair, to my knowledge, Guy Fieri has never been accused of sleeping with diner/drive-in/dive waitresses or using drugs. And I really don’t see why you shouldn’t put a slice of pizza on top of a burger. (You put cheese on a burger, right? And tomato? Same thing. Kind of.) But if you don’t see the humor in a network television show doing an episode about the murder of a fake TV chef named Chili Reuben — again, CHILI REUBEN — who was obviously a fictionalized version of Guy Fieri, then man, I don’t know what to tell you.