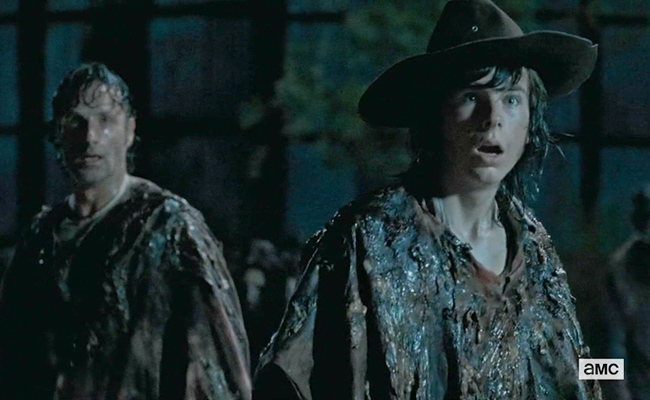 Welp. Robert Kirkman said The Walking Dead‘s midseason premiere would be a bloodbath, and it’s safe to say that was an accurate statement. It started with the cold open. Remember all those threatening bikers claiming that everything belongs to Negan? Yeah, well, they weren’t an issue for long.

Turns out Daryl is apt with a rocket launcher. This skill would come in handy later on.

Meanwhile at Alexandria, the group tried to make their way past the walker horde. Things escalated quickly, starting with Sam having a good reason to be scared, after all.

Jessie couldn’t quickly adjust to her child getting eaten alive in front of her and ended up with a similar fate.

And because Jessie’s grip was so strong, Rick had to hack her wrist to save his son.

And all that was the last straw for Ron.

Oh good, Michonne took care of that without any other dam… YIKES!

Well, yeah, with this sudden shift, you’d want to get out of there ASAP, too.

Lucky for Carl, Denise made it out of the Wolf’s clutches.

With his son in better hands, Rick then headed back into the fray.

This forced many Alexandrians to step up and assist Rick.

Even Morgan got back into kill mode.

As for Glenn’s risky plan to save Maggie, it worked…with some help.

The ultimate demise of the walkers required another dose of rocket launcher.

And after a whole montage of kills, the hoard was dissipated.

So, while the survivors are safe, there’s just as much disarray now as there was a few months ago. We’ll see how the group rebounds from this next week.