As the credits rolled on the latest episode of The Walking Dead, viewers took to social media to express their sorrow and sadness at what was obviously the death of Glenn Rhee. Unless we were specifically looking for it, the scene in which Glenn died contained no ambiguities: He’d fallen into a pit of zombies, they’d pounced on him, pulled out his guts and ate them. R.I.P. Glenn Rhee.

Viewers were crestfallen that they’d lost a fan favorite on the series, but they also understood: This is the nature of The Walking Dead, where anyone can die, even the most popular characters. Glenn’s death was a necessary reminder of that. Our hearts were heavy, but eventually, we’d move on.

Within 20 to 30 minutes of Glenn’s death, however, confusion set in. The Internet had already started rumbling about the possibility that Glenn had not died, that Nicholas had been used as a human shield, and that Glenn would find a way to escape. Because we love Glenn, there’s part of us that wanted to believe that he was still alive. When he didn’t show up on the In Memoriam section of The Talking Dead, and when Scott Gimple left a note saying that Glenn would be back on the show in some form to “complete the story,” that confusion morphed into something resembling both hope and disappointment: Hope that Glenn would come back! Disappointment that The Walking Dead had manipulated and tricked us.

By Monday afternoon, the sorrow, the confusion, and the hope had all metastasized into straight-up anger. We’d been hoodwinked! The Walking Dead had engaged in shenanigans! Critics were complaining that television’s “shocking deaths” were losing their power because no one stays dead. Glenn had been Jon Snow’d! The Walking Dead may have suffered a death more fatal than that of Glenn Rhee, Vanity Fair suggested: It had suffered the death of plausibility. How could Glenn possibly survive that?

Still, most signs point to the fact that Glenn survives, which has created a huge predicament for the series, best summed up by Lenika Cruz over on The Atlantic:

This circus feels like an abuse of the entire narrative concept of the cliffhanger—to create suspense and tension and momentum—because viewed alone, “Thank You” seems unambiguous about Glenn’s status. AMC retroactively turned the episode into a cliffhanger, which will play badly whether Glenn is alive or not: If he’s indeed dead, many fans got their hopes up for nothing. If he’s alive, “Thank You” will go from being a beautiful, tragic farewell to a bait and switch.

Except maybe there is one scenario that will give everyone what they want in this situation.

Remember the redshirt Alexandrian from the episode, who was infected and was trying to get back to Alexandria to say goodbye to his wife before he turned? He wrote a note to Michonne, and Michonne told him to keep it because he was going to make it back. He didn’t. He got pinned against a gate and devoured by zombies with that note still in his pocket. 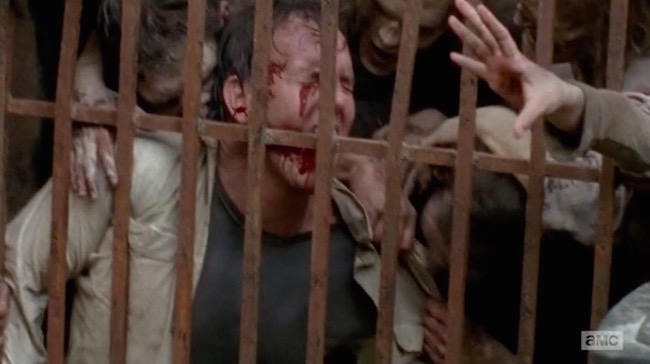 Some people saw echoes of Glenn’s story in the redshirt’s backstory, as he relayed it to Michonne:

“After I thought I was dead and gone, [Betsy] was my first friend. Then she was more. She made me more. Even better than how I used to be. But if I could make it back, I’d want to say goodbye. Tell her that finding her in all this, that was everything.”

But what if Glenn does get to go back? What if he gets to complete the redshirt’s story and go back and tell Maggie goodbye, that “finding her in all this, that was everything?”

Let’s say that Glenn does manage to sneak under the dumpster, and then someone new comes along to save him. Let’s say that someone is Jesus, the guy with whom he was spotted filming on set. Jesus and Glenn then go back and help Rick, Abraham, and Daryl lure all the walkers away from Alexandria, but in the midst of that, Glenn is infected, just like the redshirt Alexandrian.

But, he doesn’t die. He has enough time to get back to Alexandria. To get back and say goodbye. To get back and return the stop watch to Maggie that Hershel gave him when he gave Glenn his blessing to marry Maggie.

After Glenn says goodbye, after he gives her that stop watch, after telling her that she’s his “everything,” after Maggie tells Glenn that she’s pregnant, then Maggie has to kill Glenn before he turns.

It would be devastating.

Producer and special effects guru Greg Nicotero basically said that this season plays out in one day, harkening back to the siege by the Wolves on Alexandria, which all happened within the same amount of time it took for Carol to bake a casserole. We’re in the middle of that day; the day is far from over. There’s more in this storyline to tell, and we will see Glenn again. Gimple said as much, and Nicotero reaffirmed to EW:

It’s not like we’re trying to be sneaky; we’re trying to preserve the story because we want the fans to have the greatest viewing experience possible. That’s why when everybody’s like “Is Glenn dead?” — Scott already said we will see Glenn again throughout the course of the season, but we want the audience to go on this journey. We want them to discover our storyline as we go.

Ultimately, I think, the journey through the day includes meeting Jesus, and it will also include Glenn’s death. If it doesn’t happen here, it will happen later in the day, but not before Glenn gets to say goodbye.

A death in which Glenn says goodbye to Maggie — as Scott Gimple suggested — “completes the story.” It completes the redshirt’s story. It closes the loop on the stop watch. It means that Maggie gets to say goodbye to Glenn, unlike the situation with her sister, Beth, when she just missed saying goodbye. The viewers get some real closure on Glenn’s death, but we don’t get cheated out of it.