What’s On Tonight: Stephen Curry And The Warriors Look To Close Out The NBA Finals In Game 6 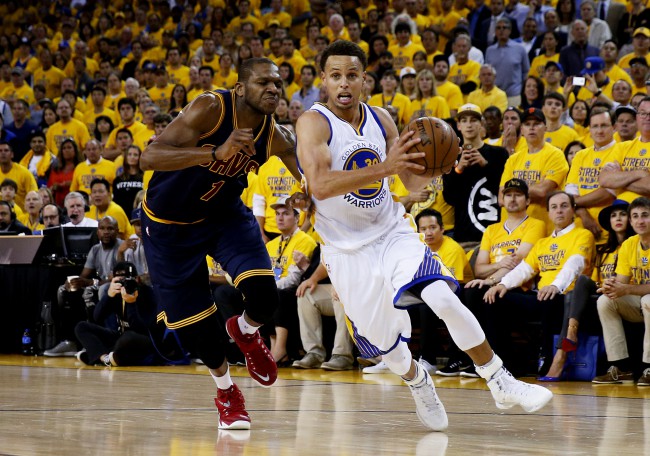 NBA Finals: Game 6: Warriors at Cavaliers (ABC, 9:00 p.m.) – Stephen Curry and the Warriors are a win away from the team’s first title in 40 years. Odds are, they’ll probably hoist that golden ball up into the air tonight, but at least the Cavs have LeBron James and brand new Apple Watches.

The Haunting in Connecticut 2: Ghosts of Georgia (Syfy, 7:00 p.m.) – Happy family buys a home in Georgia. Happy family discovers that home is haunted by former slaves who used it as a stop on the Underground Railroad. Happy family almost dies, but instead lives on to suffer with PTSD from being haunted by evil spirits for the rest of their lives.

America’s Got Talent (NBC, 8:00 p.m.) – A group of elderly Evel Knievels decide to smash stuff in their souped-up school bus while a motorcyclist jumps through hoops of fire. In other words, people are getting tired of the miming acts and lyrical dance numbers, so NBC’s giving the audience what it really wants… explosions, pyrotechnics, and old men in ill-fitting leather chaps.

FIFA Women’s World Cup Canada 2015: Nigeria vs. U.S. (Fox, 8:00 p.m.) – Just a few reasons to watch tonight’s match between the U.S. and Nigeria: Abby Wambach, Megan Rapinoe, Hope Solo’s resting bitch face (also, the fact that she is the best goalkeeper to ever live), concussions, hair-pulling, the zero percent chance that anyone will take a dive in order to get a call, the 100 percent chance that the U.S. will win Group D, Abby Wambach. That pretty much covers it.

Pretty Little Liars (ABC Fam, 8:00 p.m.) – Hanna hopes to bring the girls back together after what happened at the Dollhouse, while Spencer and Aria play detective and Emily and Allison make new friends.

Rizzoli & Isles (TNT, 9:00 p.m.) – The Season 6 premiere kicks off with a man being shot while waiting for a train in Boston, and an investigation that points to a fellow detective as the culprit.

Stitchers (ABC Fam, 9:00 p.m.) – A wife is murdered, and her newlywed husband is the suspect, so the team decides to invade his memories in order to find out the truth.

Clipped (TBS, 10:00 p.m.) – Think Barbershop in Massachusetts with that girl from High School Musical. Not Vanessa Hudgens, the other one.

Proof (TNT, 10:00 p.m.) – A brilliant surgeon is hired by a terminally ill billionaire to investigate cases of life after death because he heard through the grapevine that she’s a bit obsessed with reincarnation, near-death-experiences and hauntings.

Tyrant (FX, 10:00 p.m.) – The Season 2 premiere begins with Barry still sitting in a prison cell after that failed coup against Jamal. Meanwhile, Jamal is still deciding whether or not he should execute Barry or just let him rot in jail for the rest of his life, and Molly’s busy fighting for her husband’s freedom.

Royal Pains (USA, 10:00 p.m.) – An actor starts stalking Hank as prep for his new role, while Divya performs some genetic testing on a royal patient.