Who Supported Jay Leno When He Took ‘The Tonight Show’ Back From Conan O’Brien?

Five years ago, NBC Universal executives pulled the rug out from under Conan O’Brien. They felt audiences didn’t like him all that much, and they sorely missed Jay Leno’s broad appeal. By the time the smoke had cleared, O’Brien was out and Leno was back. The Tonight Show with Conan O’Brien aired its final episode on Friday, January 22, 2010.

Support for O’Brien throughout the ordeal was tremendous. From the “I’m With Coco” and “Team Coco” public campaigns, to media professionals and celebrities providing comment, it seemed O’Brien had friends just about everywhere — except at NBC, where it mattered most. The network obviously wasn’t his biggest fan, but who else didn’t join the bandwagon? Or, to rephrase the question, who was on “Team Leno”?

From the public’s perspective, then-NBC Universal CEO Jeff Zucker was the main boss at the end of the video game that was late night television. However, he wasn’t the only network executive who thought everything about Leno involved sunshine and rainbows:

Referring to the pointed jokes made this week by Mr. O’Brien and David Letterman of CBS, [NBC Sports Chairman Dick] Ebersol said it was “chicken-hearted and gutless to blame a guy you couldn’t beat in the ratings.”

He added that “what this is really all about is an astounding failure by Conan.” Mr. Ebersol is a veteran at the network, with a longstanding relationship with NBC Universal’s embattled chief executive, Jeff Zucker. Mr. Ebersol also has a deep link to the network’s late-night history, having been a creator of “Saturday Night Live,” and he has been frequently consulted on changes in NBC’s late-night lineup. (Via New York Times)

“There’s a certain amount of kidding that goes on between these personalities which can often be funny. But this has definitely crossed the line,” Jeff Gaspin, chairman of NBC Universal Television Entertainment said in a statement. “Jay is the consummate professional and one of the hardest-working people in television. It’s a shame that he’s being pulled into this.” (Via Los Angeles Times)

NBC carried the Leno flag with pride throughout the controversy. Even if Ebersol and Gaspin never spoke out, the network’s ties to the former Tonight Show host were strong. 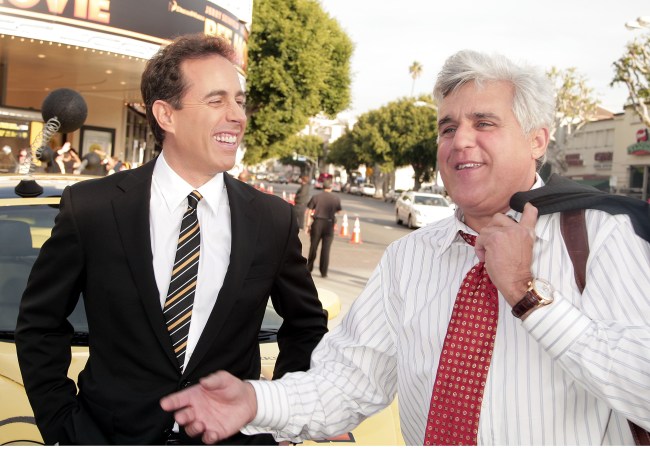 That Jerry Seinfeld and Leno are best buds has never been a secret. So when NBC decided to kick O’Brien to the curb in favor of their well en-chinned ex-Tonight Show host, Seinfeld had plenty to say about it:

“I don’t think anyone’s preventing people from watching Conan. He’s there,” Seinfeld said, referring to O’Brien’s ratings declines, most of which can be attributed to poor lead-ins from Leno’s show and late local newscasts.

Oprah? The Oprah Winfrey? Say it ain’t so! Just before Leno’s return, he sat down with Winfrey for his first television interview regarding the matter. At one point, Winfrey offered Leno her take:

“I’m really surprised that so many people are against you, because I think people don’t understand the way television works. I can understand people thinking you were selfish if you owned the show and controlled the show. It’s a little surprising that people think that you stole the show, when it wasn’t your show to steal.” (Via ABC News)

The daytime talk show host also recorded a 30-minute audience discussion for her website. Between her audience’s assorted jabs at both Leno and O’Brien, Winfrey seemingly sided with Leno throughout the debate.

“You know, the extra amazing thing about Jay is — whenever they ask him to try something, he almost always says ‘Sure.’ They asked him to step down and make room for the other funny guy, he said, ‘Sure.’

They asked him to put his show on earlier at night and he said, ‘Sure.’ Then they said, ‘Oh, boy, I think we made a mistake — would you mind going back to where we had you in the first place? That would really help us.’ And you know what he says? ‘Sure.'”

“Yeah. And how about the fact that while all this craziness is going on, Jay just shows up to work every day and does his job. He doesn’t complain, he doesn’t get upset… He just does what he’s supposed to do: he makes people laugh. That’s not easy, you know.” (Via Huffington Post)

Reiser appeared on Leno’s revamped Tonight Show a year later — just days after his own show was axed by NBC for poor ratings. You should have opened the door, Burke.

Of all the people who came out to defend Leno, comedian Jim Norton offered one of the most thoughtful arguments regarding NBC’s behavior and O’Brien’s exit:

“Leno was unfairly vilified, and you shouldn’t vilify Conan either. But the way critics looked at it, they were like, ‘Well, you have to give Conan some time.’ And I agree, Conan should have gotten more time. But no one said that about Jay….No one gave him that leniency.” (Via CBS News)

For the full context of Norton’s comments, check out the video above. His points were some of the best given in support of Leno.