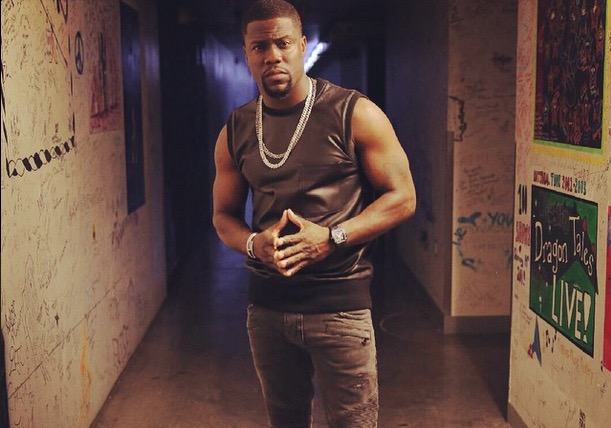 Only hours before lip syncing with Will Ferrell and Jimmy Fallon after the Super Bowl, Kevin Hart declared war on rappers Drake and Meek Mill in a war of unmerciless mockery. The powder keg was Kevin Hart’s admittedly laughable leather outfit, which Kevin Hart posted to Instagram, much to the delight of Drake, who fired the first shot: “Kevin…no. Please don’t do this tonight. #IsThatLeatherDriFit #PleaseTellMeThereAreOtherOptions #ThisIsABillBellamyFit #BalmainWillNotHireYou #ThisManIsOverlyLit”

Philly native Meek Mills later piled on, asking on his Instagram account to “start a petition for kev 2 take this shirt off. cmon Man U from philly.” Comedian Lil Duval added in the comments of that post, “Maaaaaan [Kevin Hart] if u don’t get the f*ck outta here wit that full body waist trainer on.”

Marlon Wayans also got in on the action, saying that the vest looked like it was stolen from a GI Joe action figure.

Dear Kev, I wanna start by saying that I love you like family, I'm so fucking proud of your accomplishments but nigga take that tight ass vest off. It looks like you stole it off my GI JOE action figure. You look like the lil chimpanzee Ceasar from planet of the apes movie all geared up for war against man kind. That vest is so tight your chest is screaming "nooooooooooo"! (*in my @kevinhart4real voice.) first glance I thought the midget from the penitentiary movies graced the cover of vogue. Then I thought maybe one of my turds in this mornings shit stole my Barneys card and went on a shopping spree. I don't know what look you going for brah, a sexy milk dud? A swagged out junior mint? A GQ sugar baby? You need friends dawg. Nobody loves you. I want you to slap Harry, wayne, spank, naim and the pilot of your jet in the face with a wet hand. This look like the chocolate dropper version of the Get Rich or Die Tryin album cover. #nobodylovesyou #startedfromthebottomwhyareyouhere #howmanypushupsdidyoudobeforethis #stopthemadness #calltheaccountantfreezethecardsthisniggaisspirituallymaxedout #igotafaceliketheballstombradytooktheairoutofwasfunnyasfuck

But Kevin Hart wasn’t just going to sit back and let them poke fun of him, unchecked. He declared war on Drake, Marlon Wayans, and Meek Mills in a video Instagram post, telling them they’d committed social media suicide.

Hart backed it up, too, taking aim at Drake through an old photo. “Boooooom Biiiitttccccchhhh #WarHasBeenDeclared”

Jesus Christ…..where in the hell do I start???? Why is @champagnepapi in a bathtub with a hookah???? Who said that this shot would be great for UR career. Is this a Canadian thing??? This looks like a "Sex Hotline" add….I bet the bubbles were your idea. This looks like a Lionel Ritchie album cover….what in the hell are you staring at??? This is truly your "WORST BEHAVIOR" you just went 0 to 100 real quick with this dumbass picture….Holy shit Drake looks like the type of guy that would drink his own bathwater…..in his voice "It taste like cucumber melon" …..u look like a light skin Gerald Levert with that dumbass beard!!!! I hate it….I demand that you lose that beard ASAP. Boooooom Biiiitttccccchhhh #WarHasBeenDeclared #ThisIsWhatiDo

He also threw Meek Mills under the bus, saying he had plastic surgery that made his face look like a “chopped & screwed mix tape.”

Holy moly donut shop….Awwww shit. I'm about to expose my good friend @meekmill ….nobody knows this but he's had plastic surgery done to his face. This can't be the same guy….His face looks like a chopped & screwed mixtape…..this mans front teeth look like a pair of white Jordan 11's….This picture should be in a dictionary next to the word "DirtyNigga" …..He's making a face that clearly shows that he has bad body odor!!!! This is a real life "I eat ass face"…..I will bet all of my money that his hair smelled like mildew back then!!!! Wait a minute I just realized that this is a picture of a flat chested young black woman!!!! Boooooom Biiiittttcccchhhhh #WarHasBeenDeclared #ThisIsWhatiDo

Y'all done fucked up…. My first victim is @marlonwayans ….Your face looks like one of the Footballs that Tom Brady let the air out of. You could of played "Whitney Houston" in her Biopic….If a "Black & Mild" cigar came to life it would look like you….Lick your lips before you take a picture this close!!!! Why do u have 3 different grades of hair on your face???? You look like a monkey that the government runs test on!!!! What's that WHITE shit in the corner of your mouth??? Wipe your corners at all time….your the "Wayan" that the family is ashamed of….they have meetings about you behind your back!!! You look like a Lenny kravitz starter Kit!!!! Boooooom Bittttccchhhhh ….@meekmill & @champagnepapi & @lilduval are fucking next!!!! Be afraid #ThisIsWhatiDo #WarHasBeenDeclared

Rest assured, however, that the war is not over. It may only be beginning, as Marlon Wayans is already lobbing more social media bombs at Hart:

Yo @kevinhart4real I was merely offering you brotherly advice about your tight ass Battlestar Galactica vest. But since you wanna "call me out" I'd like to address this photo as well. Put your shirt on. It's disturbing. You look like Bushwick Bill got his eye fixed. There's a weird shape happening here it's like Boris Kodjoe's body on Emmanuel Lewis' height. You got a body like a drunk middle aged football coach. All the oil in the world ain't gonna bring them lower abs in. You got abs like Kenya Moore. Go sit yo lil California Raisin ass down and put a shirt on. Got the nerve to have tattoos on yo black ass, we can't read them nigga all we see is raised skin. .. You gotta feel them shits like braille to know what the fuck they say. I didn't know they made nike sport wear for midget tossing … When did that shit become a sport? #idothistookev #fourfeetsixiseasytocutup #idtakethisfunnybodyoverthatuglyassvestanyday