‘Shut The F*ck Up, I’m Commuting’: THIS Is How You Sell A Used 2001 Honda Civic On Craigslist 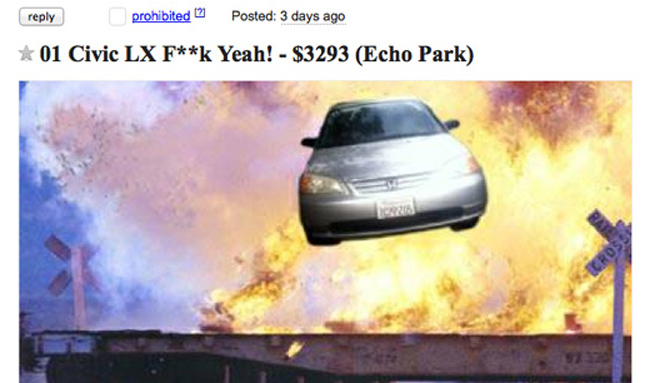 We’ve finally found a used car ad that comes damn close to rivaling the greatest Texas Jeep Wrangler Craigslist ad of all time. An Echo Park, Los Angeles man is selling his 2001 Honda Civic in a truly inspired fashion. This is a used Honda Civic, here. It’s not the most exciting car in the world, and certainly one that wouldn’t stand out on Craigslist. Which is why the seller has done a little bit of what we’ll call “creative embellishment.” I don’t think he’ll have much of a problem unloading this car, even if $3,293.67 does seem a bit pricy for a 14-year-old Civic.

Are you ready to get to WORK? Then drive the car that says, “Shut the f*ck up, I’m commuting!”

Fast cars and big trucks all scream the same thing: “I’M OVERCOMPENSATING!” If you’re secure about the size of your genitalia, drive something that tells the world you give zero shits because you average 35 MPf*ckingG.

Complete with tinted windows up front. Why not the back windows? This ride doesn’t care about some bitch-ass backseat driver (or child)! If you get tired of them complaining out of their pie-holes, you can nail them with ice-cold AC capable of freezing your dick/vagina right off.

The airbag (SRS) light came on randomly a couple weeks ago. I didn’t bother fixing it because I’m not a pussy, and if my car is going to have a hard landing after jumping over an exploding train and the airbag is going to blast me in the face, I want it to be a surprise, like a hooker jumping out of a birthday cake. BOING

Front tires are ready to rock. Rear tires are fine although not quite as rock-ready, but what do you care? You’re an LA driver–as soon as there’s a drop of rain you’re going to piss yourself and drive like the sky is falling, anyway.

This car is all-Civic, ladies. It hasn’t been trashed and racing-modded by some yabbo, because it’s a f*cking Civic. Get real people.

But wait, there’s more:
– Registered until July, 2015
– Manual transmission
– Side airbags (good incase car rolls over after a river-jump)
– CD player
– Tape deck so you can use a tape adapter to play music from your phone, you cheap bastard
– Cruise control
– Tilt wheel
– 3 floor mats that it stole from an older Civic on the playground
– Air conditioning
– A mildly squeaky belt that announces your arrival
– Teeth marks on the parking brake handle and one of the interior door handles because a previous owner must have been a real piece of sh*t and locked their dog in the car for too long. If you might do that to your dog, don’t buy this car. But do come over so you can get the c*ntpunch you deserve
– Interior 9.5/10, aside from bite marks
– Body 8/10. Gotta get some scars to earn your stripes on the street, yo.
– This is the actual mileage, unlike a vast majority of the other cheap Civics you’re finding in this cesspool of used cars
– Half tank of gas. You’re welcome.
– Clean title, full Carfax report available for anyone brave enough to ask

My name is Chris. Email me to set up a test drive. You must provide your own explosions.

** Yes, this is a real ad and this car is really for sale

Note to self: Start incorporating the term “yabbo” into everyday lexicon. But are there more pictures, you ask? Oh, you bet your sweet ass there are:

(Not Photoshopping out the windows was a nice touch.)

Sadly, as previously mentioned, gigantic angry cat is not included.