‘I Obviously Think I’m The Best’: Inside The Draft Process With Likely Lottery Pick Stanley Johnson

CHICAGO – Stanley Johnson isn’t a coffee drinker, although if he was ever going to start, now would be a pretty good time. The irony of meeting to sit down and chat in a Starbucks attached to the Palmer House Hotel in the Loop isn’t lost on him. It’s the tail end of the 2015 NBA Combine, and the one-year Arizona Wildcat just got finished with five straight hours at the hospital on Sunday of being measured, fitted, poked and prodded for team physicals.

Rather than opt for caffeine, the soon-to-be 19-year-old is popping what’s left of a bag of Skittles in his mouth one at a time, taking intermittent breaks to fiddle with the drawstrings on the hood of a Nike sweatshirt he has pulled tight over his head.

Johnson keeps coming back to something Arizona coach Sean Miller told him and the other Wildcats – Rondae Hollis-Jefferson, Brandon Ashley and T.J. McConnell – in attendance for the Combine.

“Honor the process,” Johnson said. “Every day you go do something, you honor that day. It seems so simple, but it’s so true at the same time.”

Ashley felt the same way on Thursday at the Quest Multisport complex when asked about Miller’s words of wisdom.

“It’s the main message he’s given to us,” Ashley said. “Honestly it’ll probably stick with us all until the end. You have to go day by day. You can’t ever look forward or look ahead. You have go to focus on right here, right now.”

Those three words kept Johnson smiling despite the jet lag, the packed schedule, the constant meetings and the late nights and early mornings that have made up his few days in Chicago. Even though he didn’t participate in the 5-on-5 games, Johnson was constantly working out, going through individual drills, and meeting with 15 different teams.

You won’t find Johnson complain about the experience at all. (That said, he might be a little tired of answering the not-quite-a-question, “Tell me about yourself.”) He only has to go through the Combine once, and it’s one of the last steps in a path he’s been walking for most of his life. From Chicago, he immediately flew to New York for the NBA Draft Lottery.

If anything, the former Mater Dei star is enjoying the grind – while staying committed to putting in the work he needs to justify a lottery team calling his name on June 25. He considered the opportunity to meet with Indiana Pacers president Larry Bird a personal highlight; although, he wished he had more time with the Hall of Famer to ask more questions.

“You talk about meeting someone who’s important,” Johnson said. “That’s him. I hold myself to being a competitor, and nobody competed harder than he did. He wasn’t the fastest, strongest or the guy who jumped the highest, but he was a massive competitor. Hopefully I’ll get to pick his brain about some things, but we only had 30 minutes to talk. One day.”

The 6-foot-7 wing certainly looks the part of a top pick; he’s quick, long and lanky, and all his motions are smooth. He walks with his back straight, his head up and his eyes staring forward. He welcomes the glances of those who see him and practically have a thought bubble over their heads that reads, “That guy must play basketball!”

When one of the things Johnson said in the media interview portion of Thursday’s combine – “I think I’m the best player in the draft” – caught fire and started getting passed around NBA Twitter, it was important to know why a guy currently projected to go somewhere between picks 8-12 felt comfortable saying that, and why there was no doubt in his mind that he believed it to be true.

UA's Stanley Johnson, a potential top 10 pick, is drawing quite a media throng at the draft combine. pic.twitter.com/ROYH3D4TqO

“Some people don’t think they’re the best,” Johnson said. “Me personally, I obviously think I’m the best. Once I get in the league, I’ll think I’m the best player in the league. That’s just how I am as a person. With that mindset you give yourself the highest ceiling for yourself. That’s an answer that people didn’t really give until this day and age, but me, that’s how I honestly feel. I’m not going to sit here and tell you, ‘Oh, I’m top five.’ Nope, this is how I feel.”

Johnson has been working out in Santa Barbara at P3 along with Kansas forward Kelly Oubre, and despite the fact that the pair have different things they are focused on in their training, they’re pushing each other to get better. They kept up that regimen in Chicago and could be found shooting or lifting together. Oubre is one of the most athletic wings among all the 2015 prospects, and there’s little doubt going up against Johnson each and every day will be mutually beneficial.

What position Johnson plays at the next level remains a bit of a mystery, but it’s not one he’s all that concerned with at this point. He believes he can defend anyone who is put in front of him, and his unique skill set which screams supreme athleticism works well in today’s NBA where the traditional 1-through-5 is merely a way to fill out a lineup card. (Thanks, LeBron.) 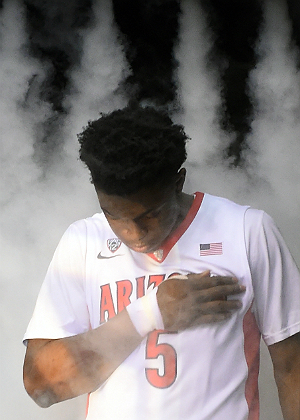 “I think it’s definitely an advantage to me and guys like myself,” Johnson said. “There’s really not a place on the floor you can’t play me. I want to play for the organization that wants me to play for them. I don’t want to have half the office want me there and half of them don’t. I want a place that takes me because they think I’m the best player in the draft.”

Even though he’s approaching the Draft in a professional manner, it’s important to remember that Johnson’s still a teenager. And he wants to make sure basketball isn’t the only thing he’s known for as person. He wants to stay passionate about the game, treating the profession with the respect it deserves while maintaining his sense of self. That means allowing himself to have fun with his friends, ride his penny board, go to the beach, play Madden (although he says his national ranking has dropped because nobody wants to play him anymore), brush up on his FIFA skills and generally be a young adult.

It’s an outlook that the NBA Players Association tries to hammer home to the prospects, and it’s one that the laid back and easy-going California native doesn’t seem to have a hard time buying into.

“Basketball doesn’t define who I am,” Johnson said. “Of course I take it very, very seriously, but basketball is not where it ends for me. My values as a person are more important to me than the basketball player that I will be. If I live my life correctly, then basketball will come easy for me.”