This week handed us our first sad farewells of the Bubble, with teams eliminated from playoff contention heading home. Bittersweet for the departing players who get to see their families, friends and their own beds again, but who, like in the case of the 2019-2020 undefeated* Phoenix Suns, played their hearts out and still have not too much to show for it.

This is no real, wager-worthy prediction, but ‘Yoffs in the Bub are going to get weird.

While players that remain have more or less locked in with the equivalent of a string of steam nose emojis, they are still living out their daily lives under incredibly regimented circumstances, with a little more downtime, in one of the most bizarre places on earth. This week there was one midnight raid attempt by the Jazz, Robin Lopez Zoomin’ with every team mascot, and Hassan Whiteside losing the concept of space and time. Resort living ennui is kicking in and dudes so dialed-in still need to blow off steam somehow so I wonder, until the Finals roll around, if the off-court action is going to match the in-game unpredictability. This is the one prediction you literally can’t bet on, and for that I am grateful.

James has a knack for elevating anything he undertakes so why stop at basketball, philanthropy, political engagement, and entrepreneurship when reading is right there, the last slovenly acceptable bastion for so many? Do I like that I can no longer read flopped out at any time, or any angle I choose? No, but I must accept the game has been changed. 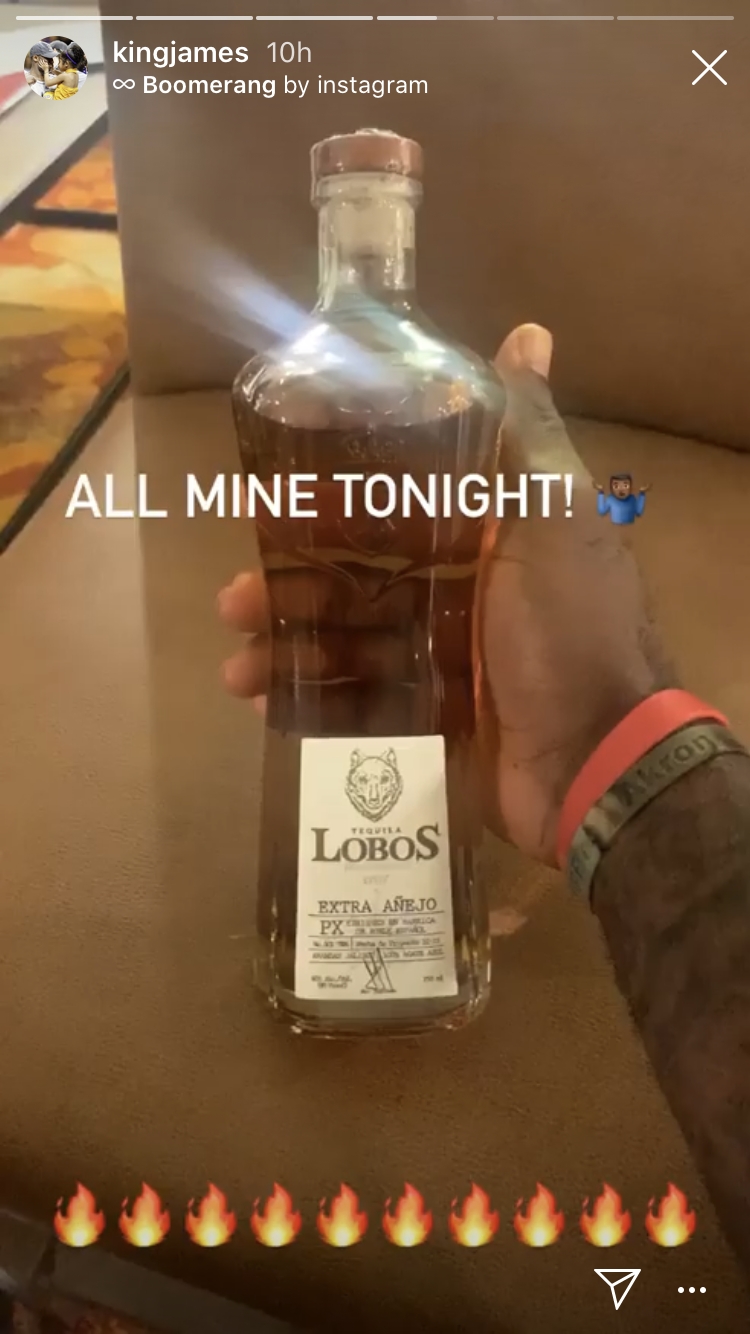 James also had some tequila delivered to him that he does not intend to share.

Rating: Casual reminder 99% of all IG commenters need to be shot into space. 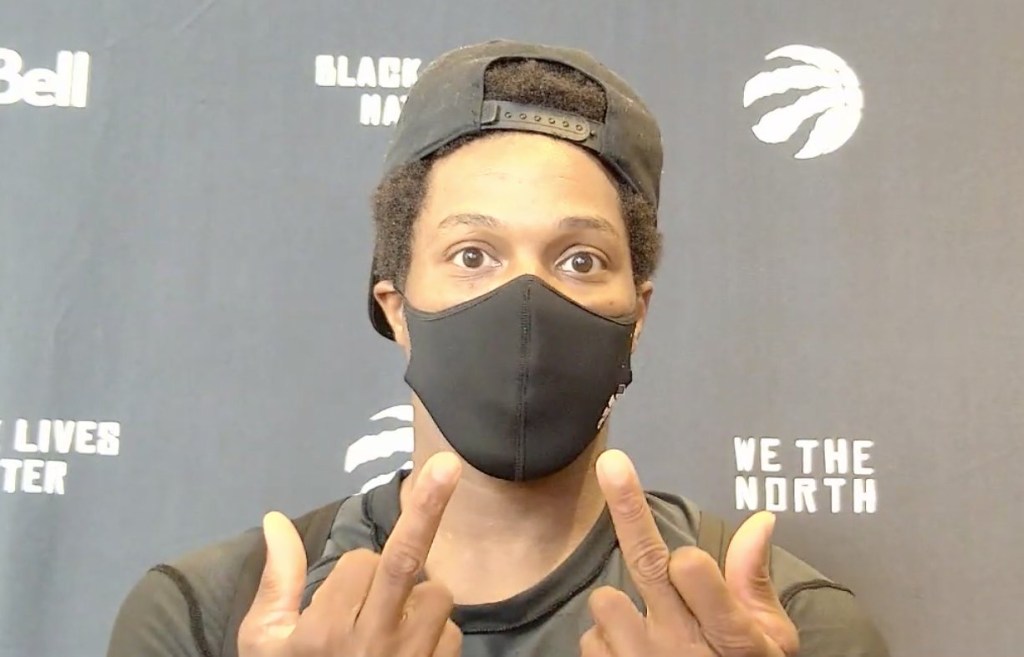 This came from a scrum, which technically exists on the precipice of in-game activity which I do not cover here, and off-court revelry of which I absolutely do, but I’ve ruled it can stay by virtue of its standalone energy.

Rating: When life hands you a gift you have to know when to accept, with both fingers up. That’s what Eat, Pray, Love was all about. 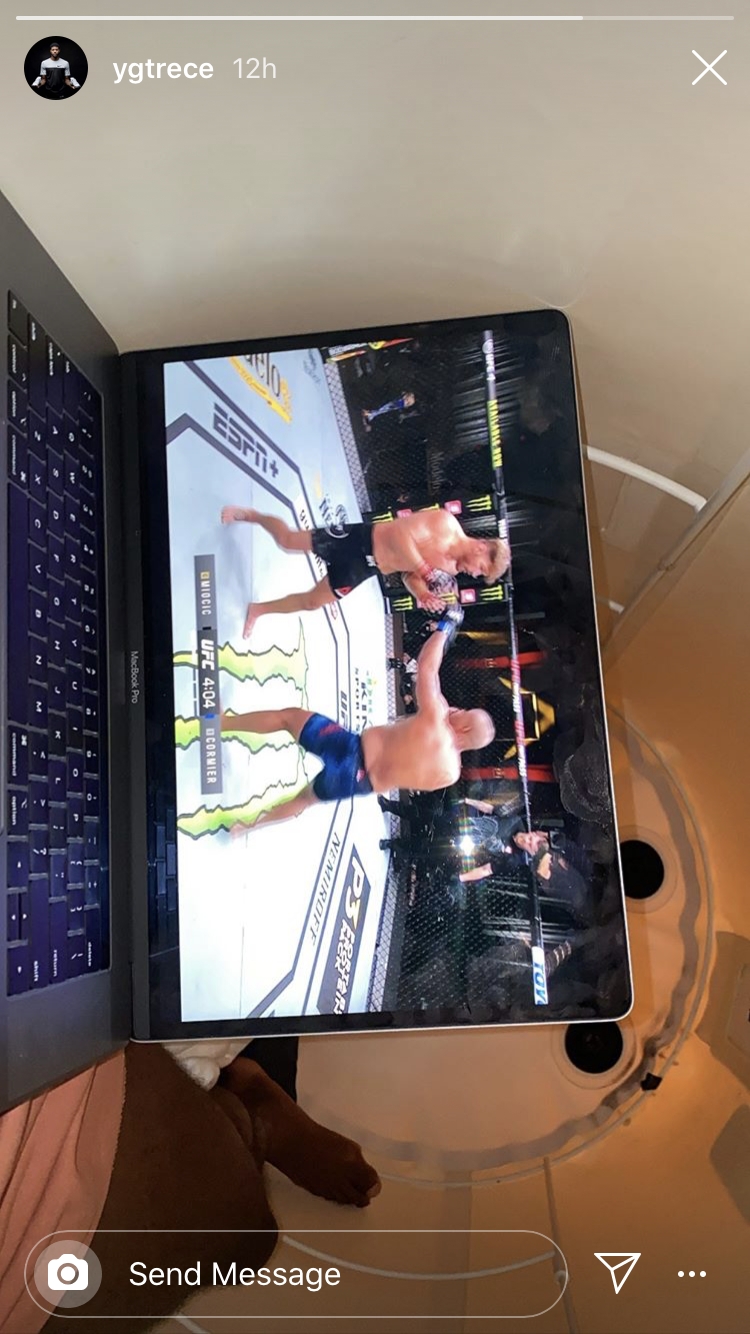 George took in a little UFC action in his hyperbaric chamber,or perhaps portable sauna, either way should we be worried at all about his laptop exploding in there? I know the Clippers need a little bit of oomph but there’s gotta be a better way to get it. 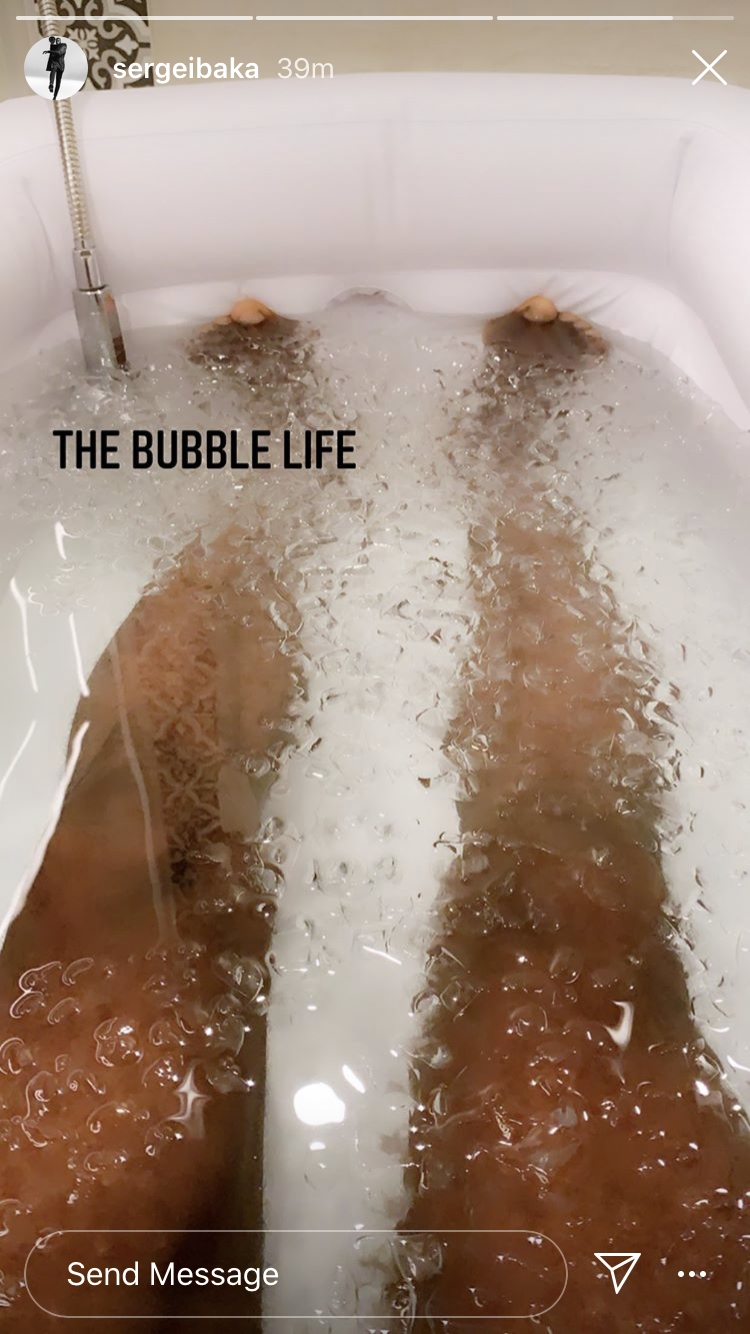 There are many people who would do this for him. Team staff, and then probably very nice hotel employees, but our guy did it himself. 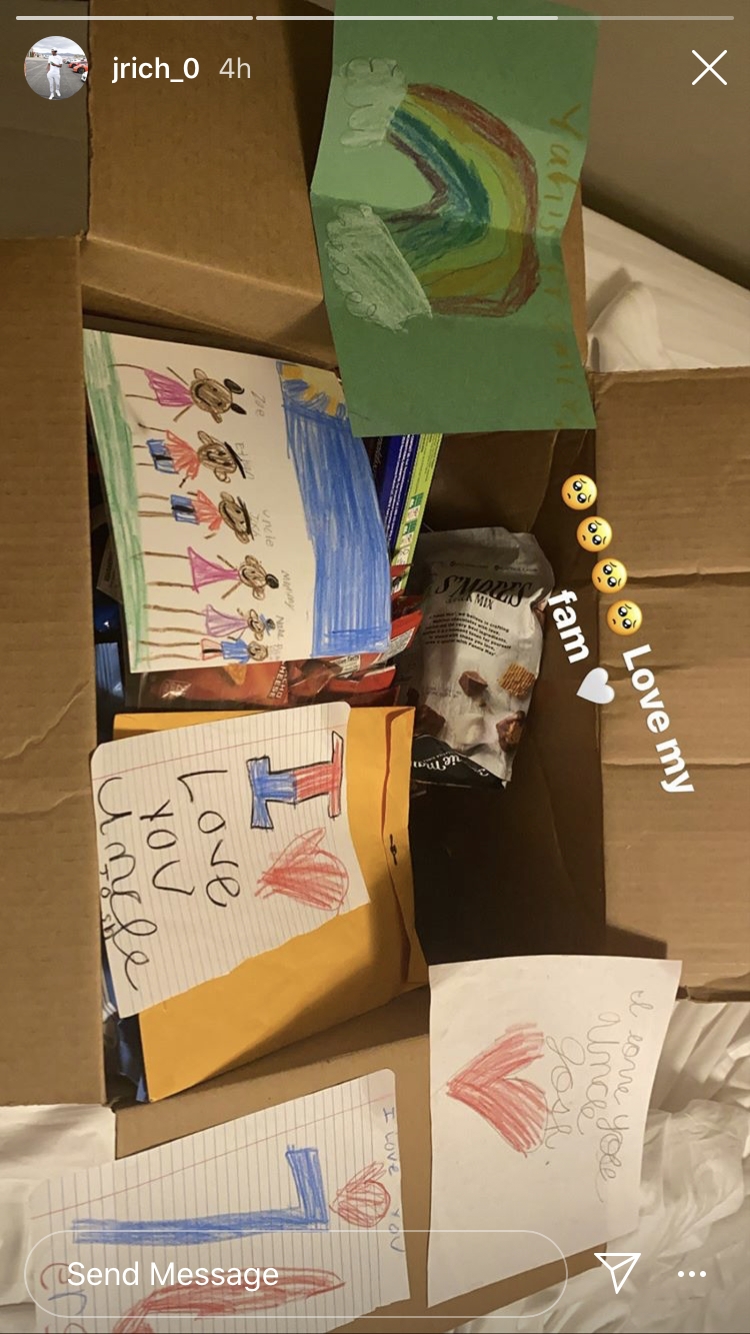 Richardson received a care package this week with snacks and very beautiful drawings, one (bottom right) that should go into consideration for the Sixers new rebrand after the rebuild that is, assuredly, by now, it must right??, be coming.

Rating: If Trump’s unconstitutional messing with the postal service disrupts even one of these care packages so help me I’ll riot. That and the ballots. 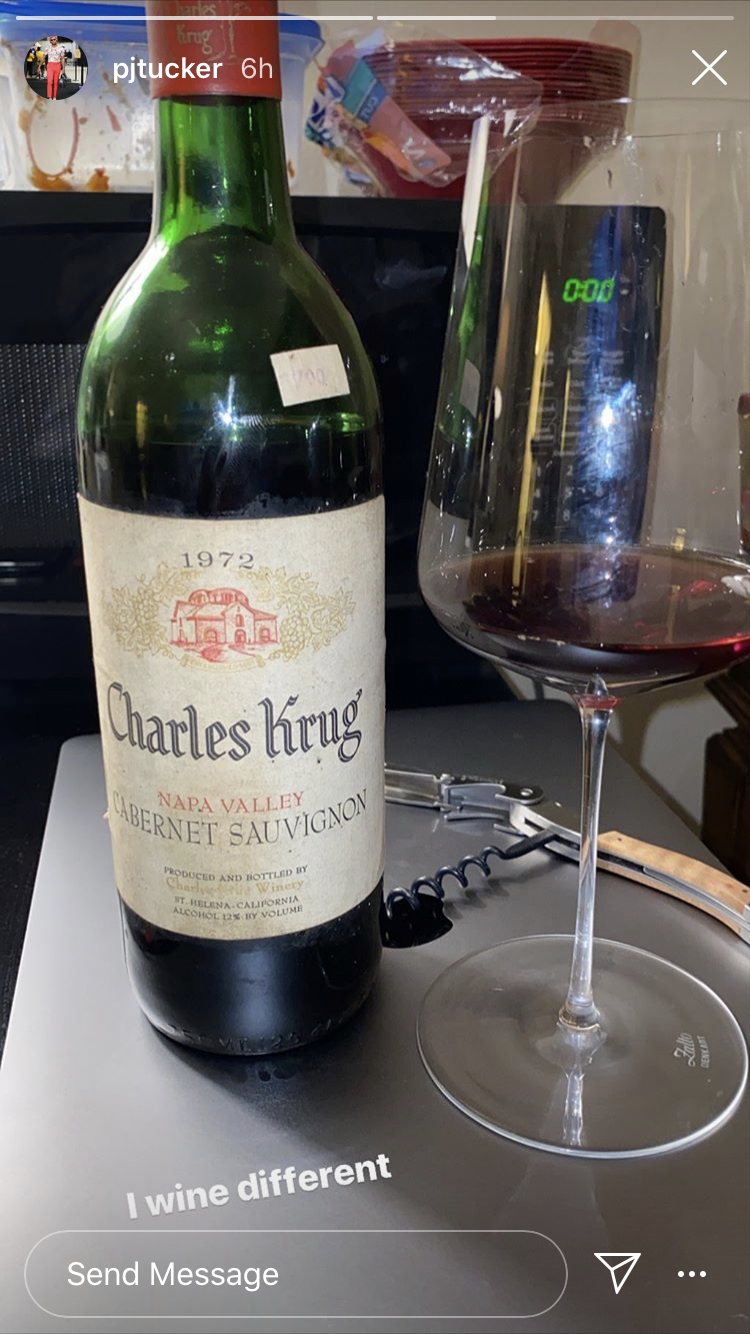 Another week, another gorgeous vintage uncorked by Tucker, enjoying himself the best way he knows how — immaculately alone.

But don’t worry, he’s getting out there and spending quality time with his teammates. Here he is with Eric Gordon in his and his ice baths, 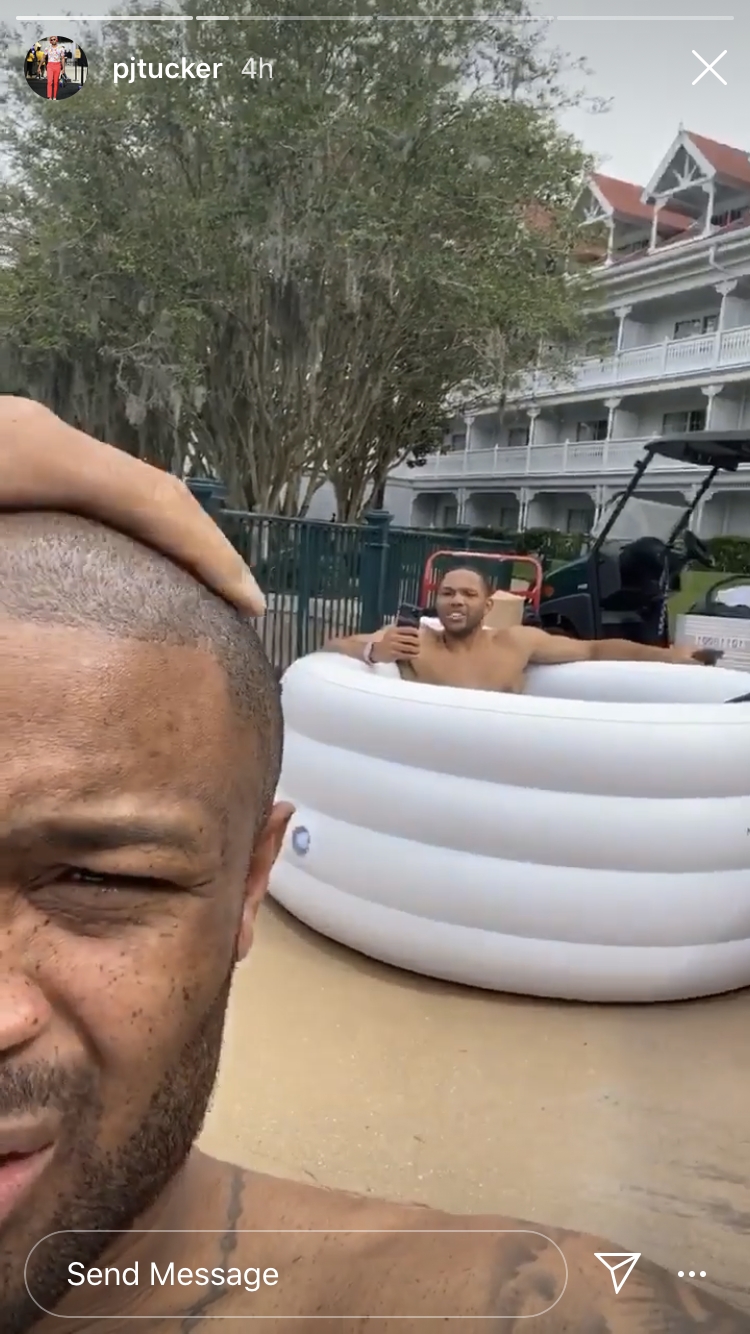 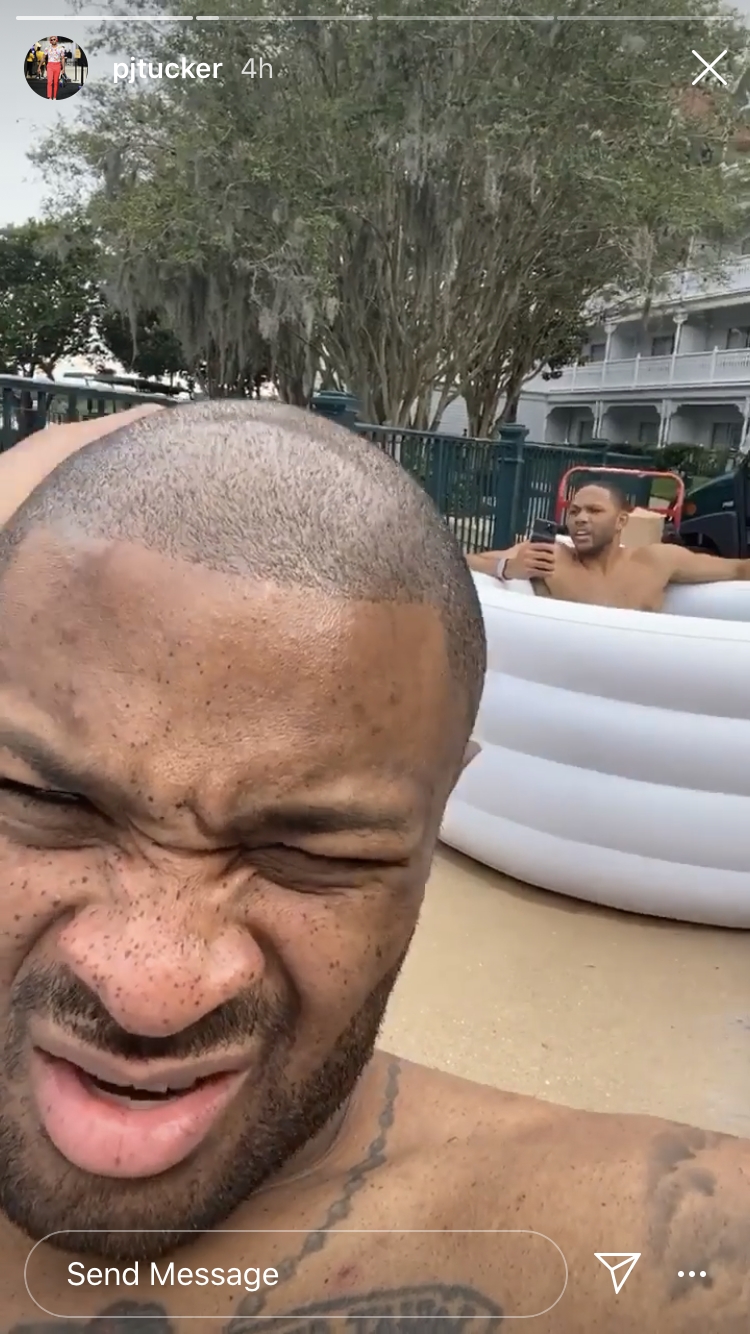 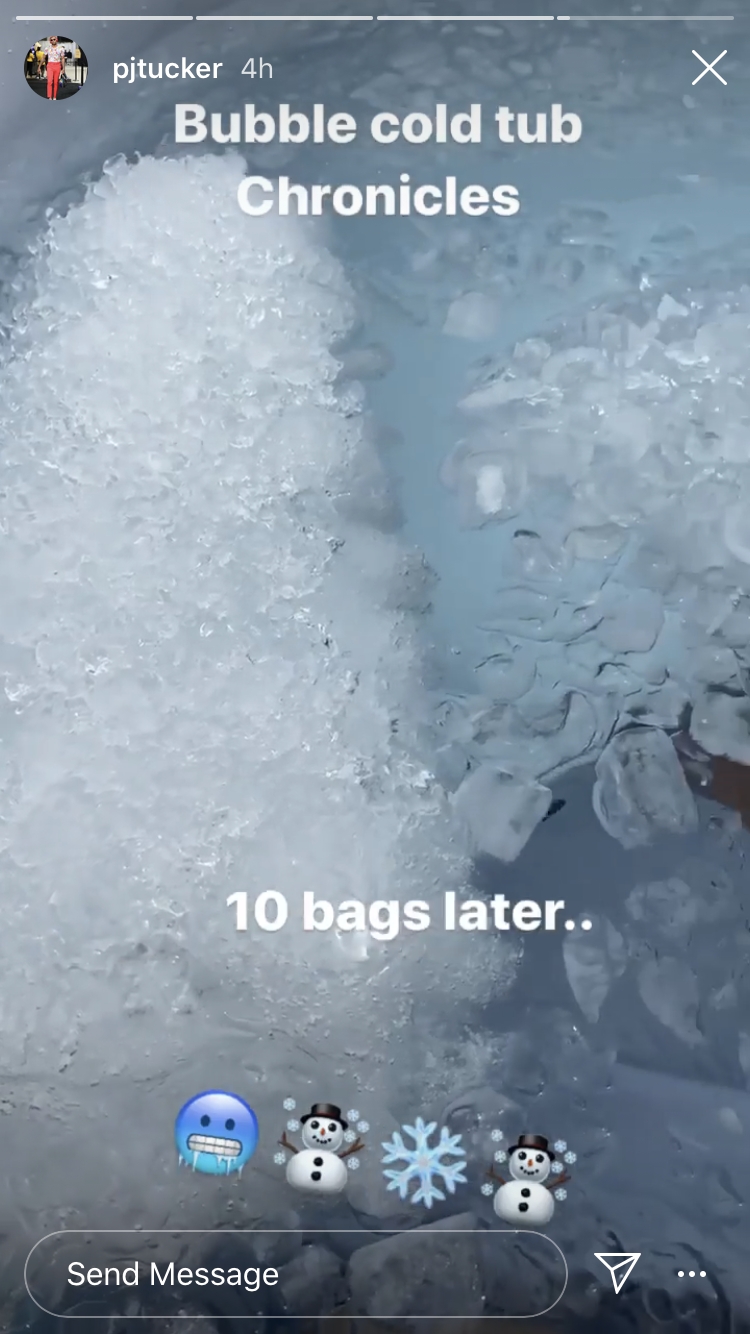 Gordon seeming weirdly oblivious while Tucker makes the correct response, a rapid sucking in and out of air through increasingly clenched teeth.

Rating: Face undergoing enough contortions to count as an anti-aging exercise in self massage. 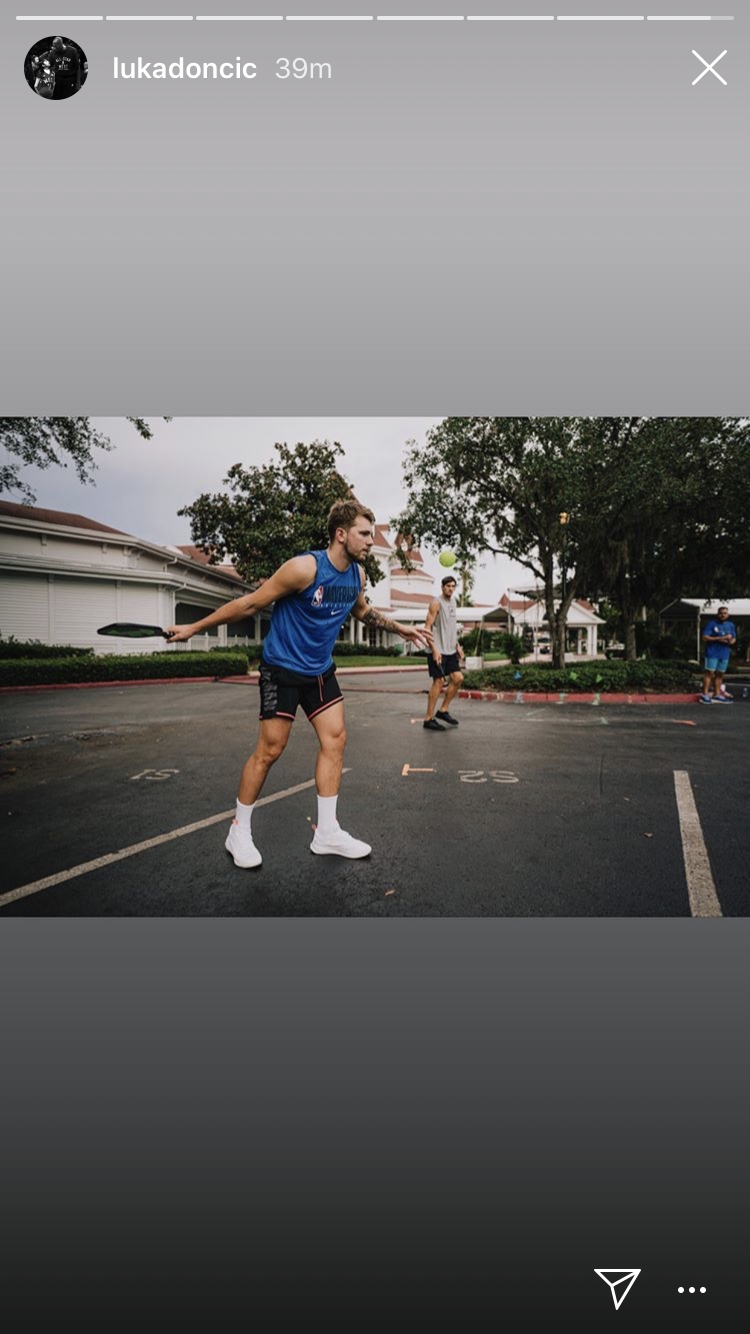 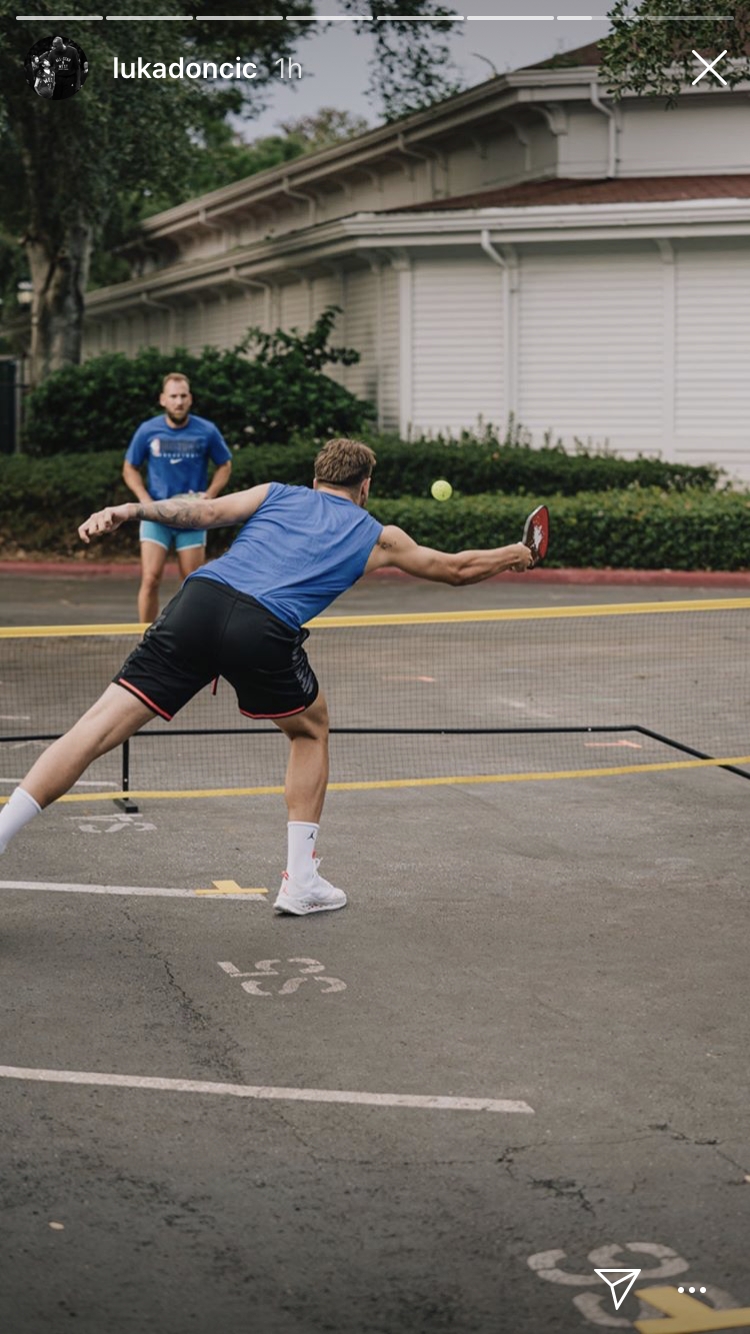 Doncic took to the hotel parking lot this week to whack a few tennis balls with what maybe looks like a competition grade ping-pong paddle, but as you know I am an expert in basketball-adjacent activities, not racquet-adjacent ones. Also I’m not sure who he was playing against? A distant Boban passing by assures us we aren’t alone with these questions.

Rating: I would argue a distant Boban, just in this plane of space and time, is comfort enough in any situation to assure one that they aren’t alone. 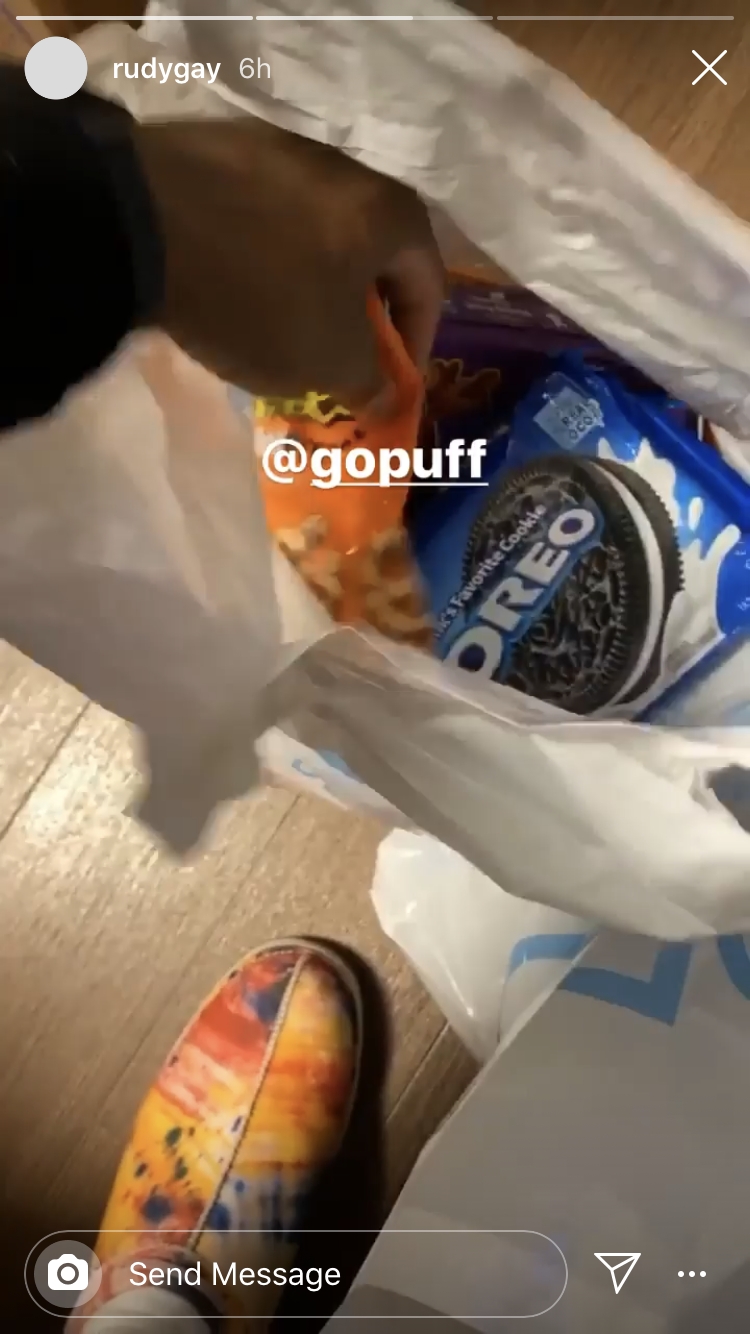 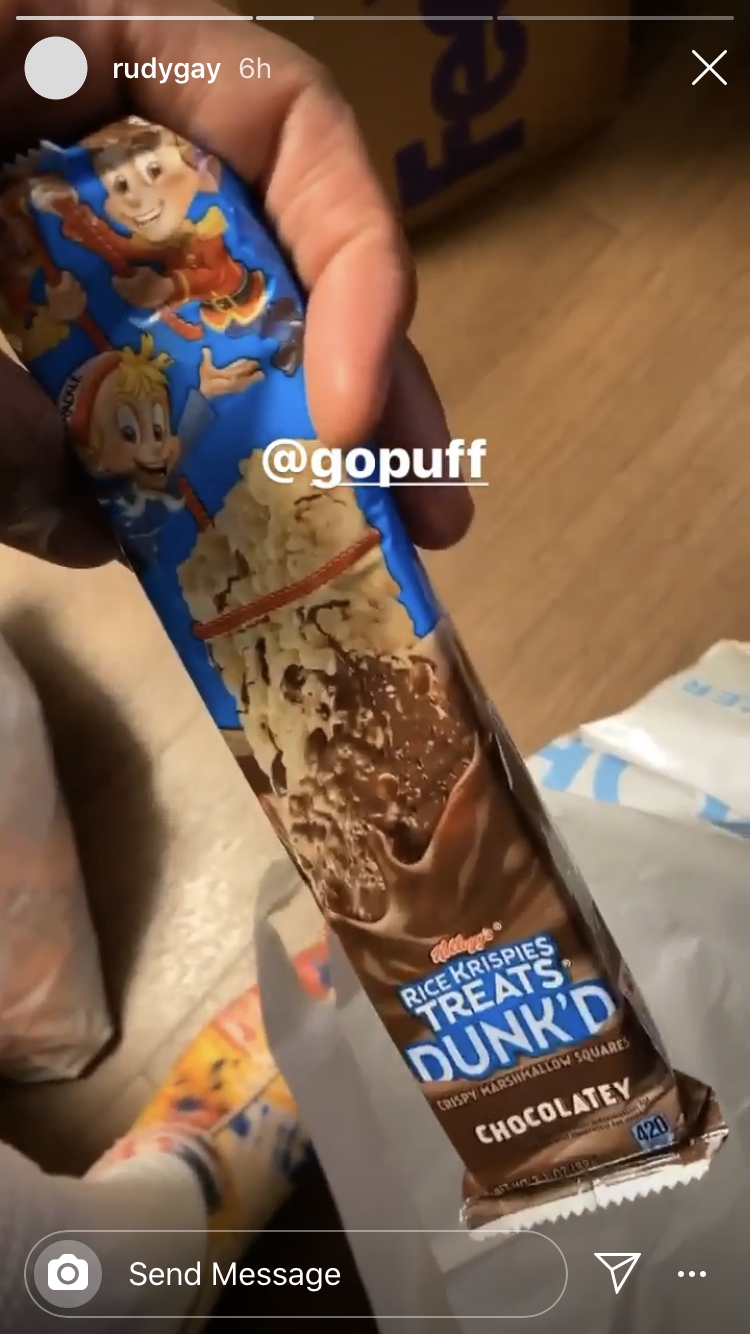 Big, big mail week for Gay, unfortunately just as he had to pack up and leave Disney. First, several plastic mail sleeves of snacks. Oreos, Reese cups, this aptly named Rice Krispie bar thing, they all came through for Rudy. 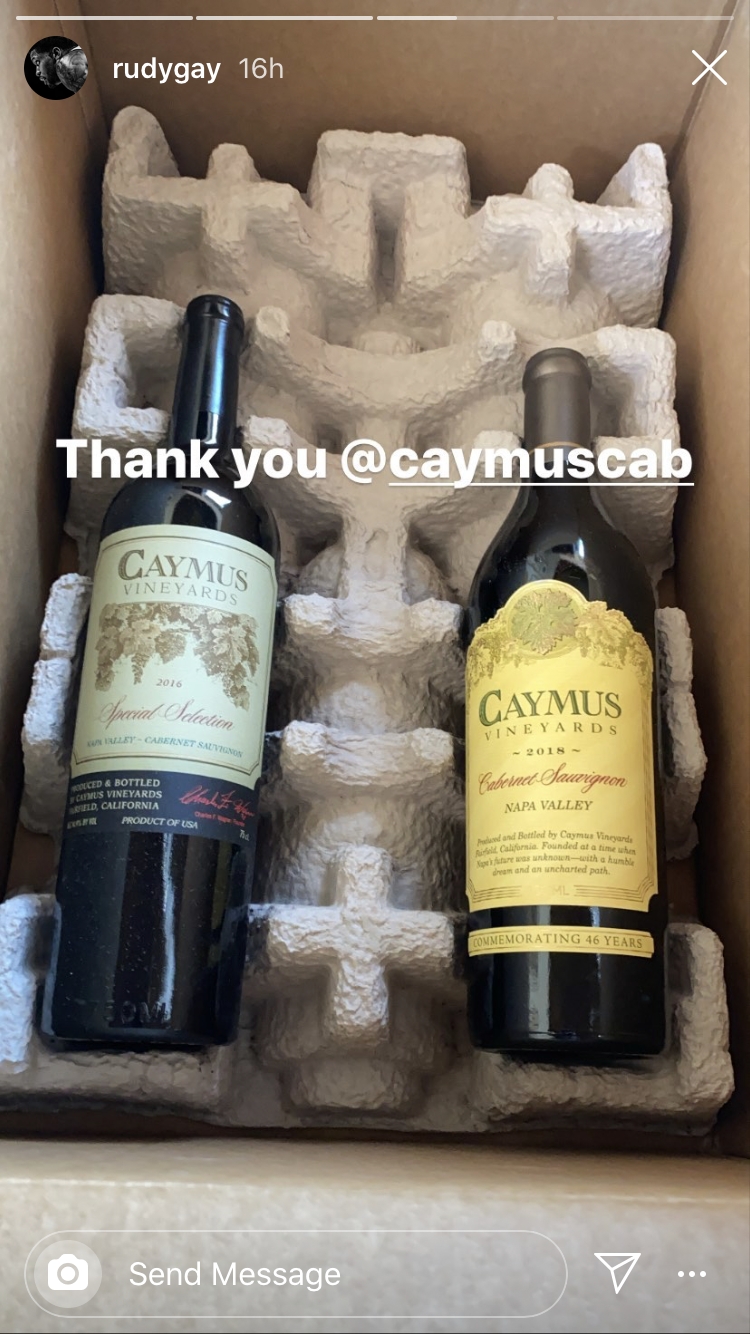 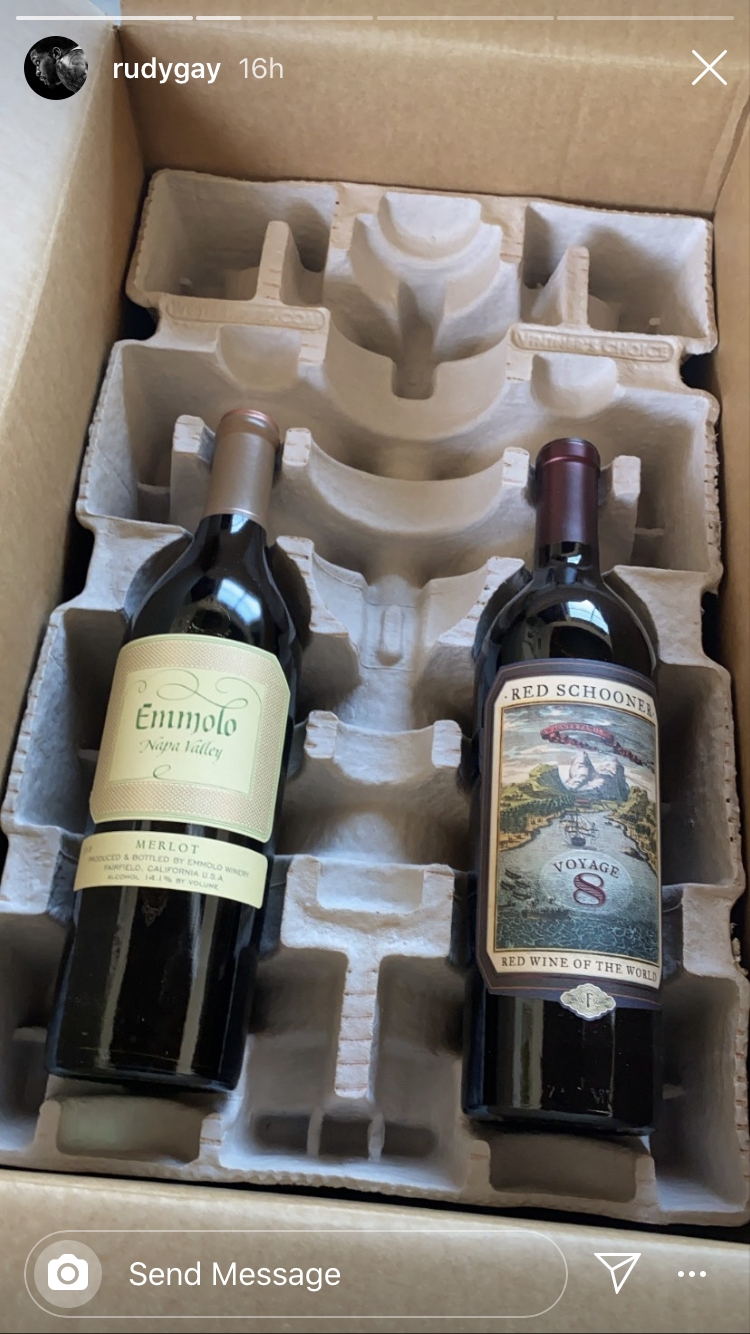 Then, in a more adult unboxing, Gay got at least four bottles of very nice wine, though I wonder on the pairings here. Does a Cab Sauv go well with the cacao bite and smooth cream of an Oreo? That weird Dunk’d thing, does it come alive in the silky, sure grips of a juicy Merlot?

Rating: It’s a good thing Gay and P.J. Tucker never met on the court after this, it would have been all the fuel Tucker needed for an absolute roasting.

This is what happens when there’s no way to tell where a joke becomes reality, reality a joke, just a never-ending, undulating yin-yang of balance in the world. This is also what happens when Jordan Clarkson finds a new IG filter. 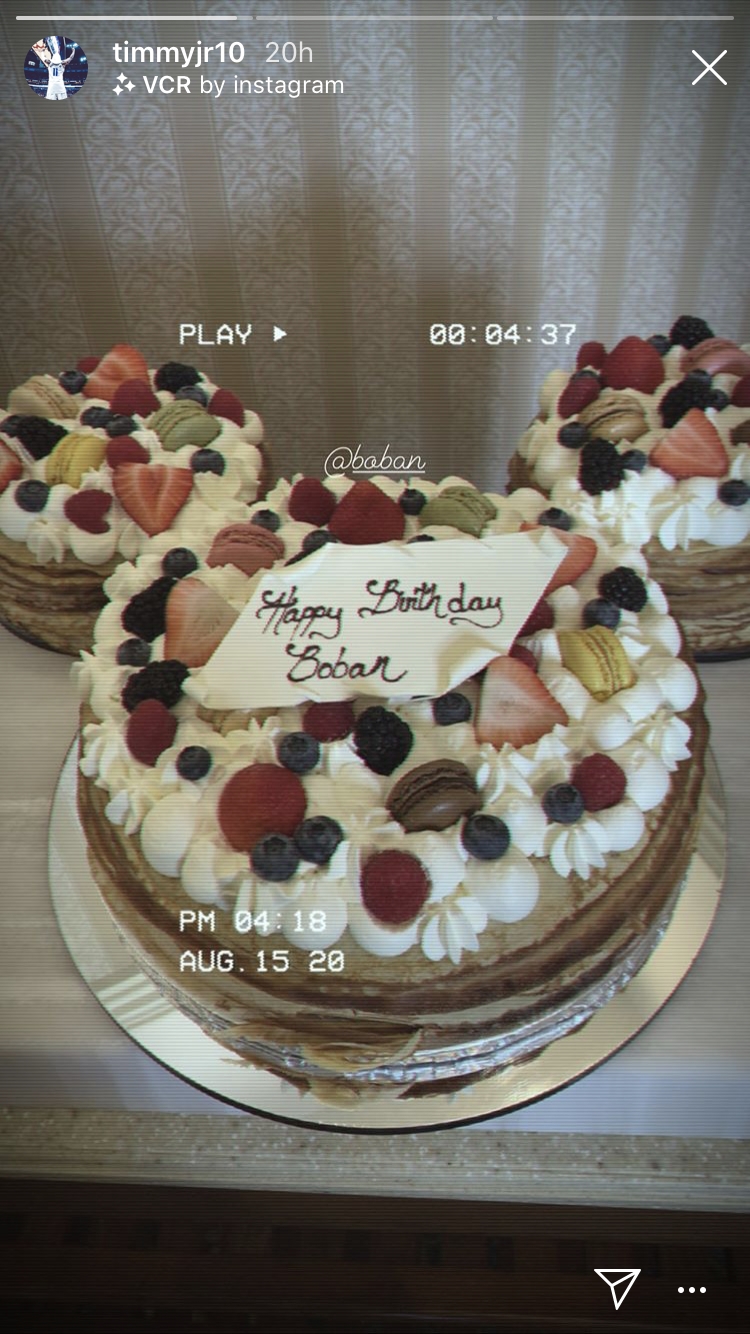 It was Boban’s birthday this week! Happy Birthday Boban! The Mavs celebrated their biggest man with several birthday cakes, the largest and most central is hopefully the one Boban got all to himself.

Rating: And thank you to Tim Hardaway Jr. who was the dutiful team dad in this moment, even committing to a camcorder filter for added authenticity. 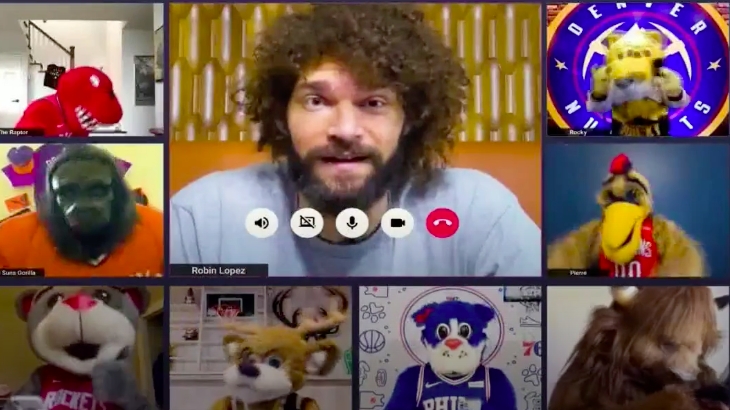 Sure yes sure, this is an ad, but was it not also a pleasant reunion with some familiar hairy faces of whom we undoubtedly miss? The irony is of course that Lopez is better known for his altercations with mascots than his loving appreciation of them, but it is still fun to picture him scheduling a zoom with all of them as they continue to “work from home”, to instruct them to get an app they can’t use because their hands can’t hold a phone, let alone maneuver an app.

Rating: Have the Disney mascots yet faced Robin’s wrath, I wonder? 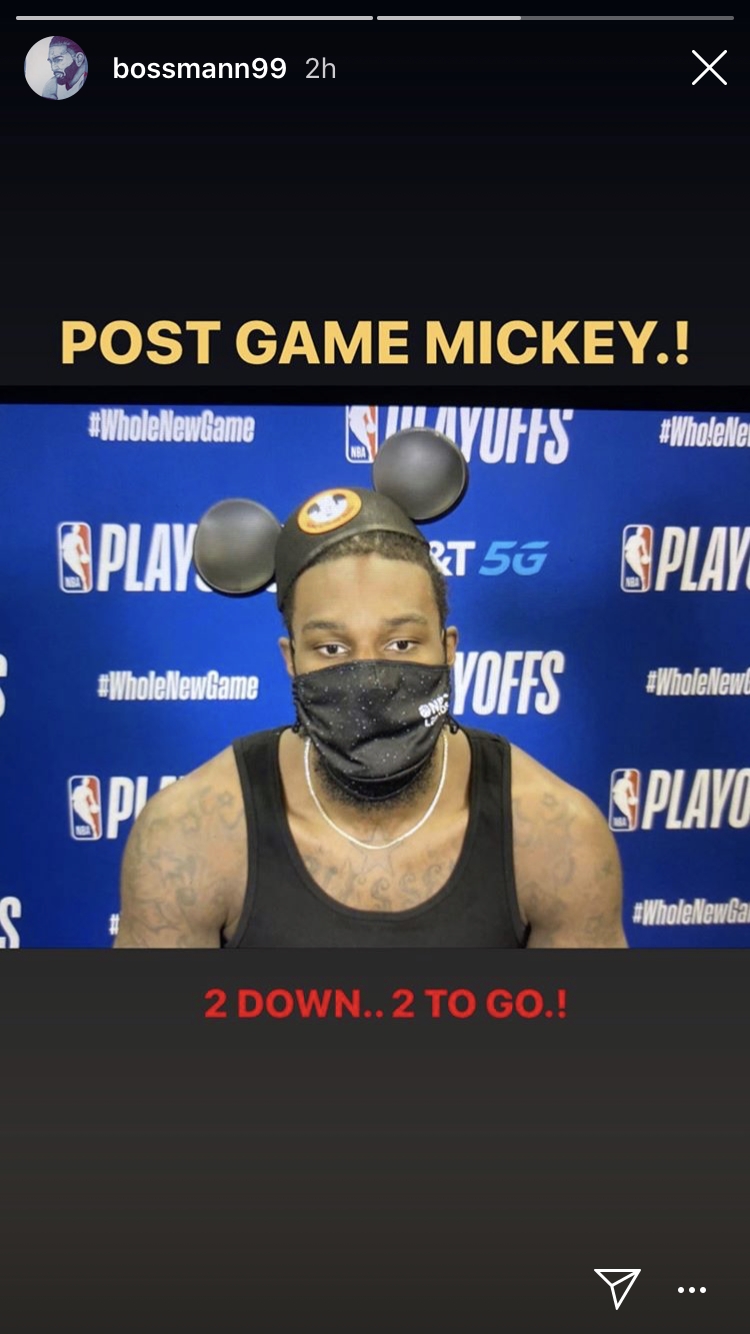 Ya ya, two scrum photos this is getting a little INSIDE the NBA over here I know, but how can I help it? A dead serious Crowder in a Mickey hat, tallying wins for the team that’s possibly the most regimented and least goofy tin the league? It’s my literal job. 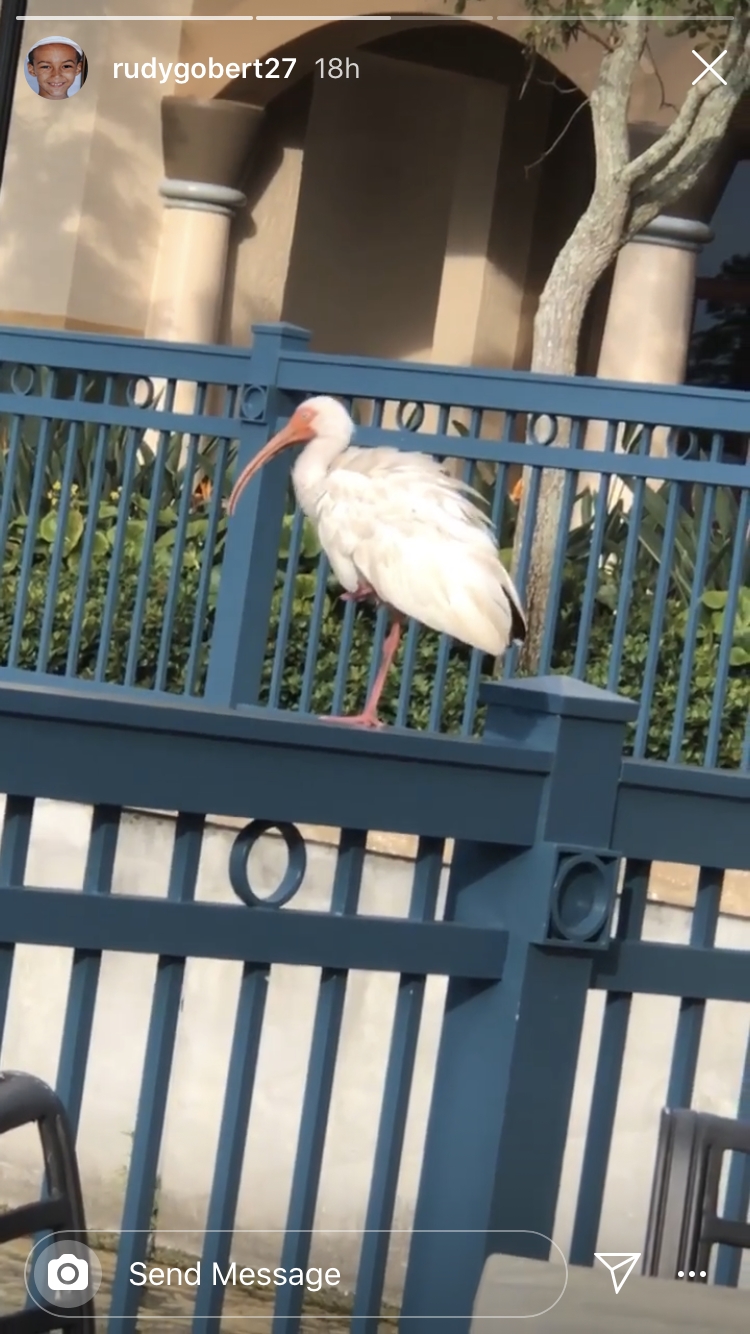 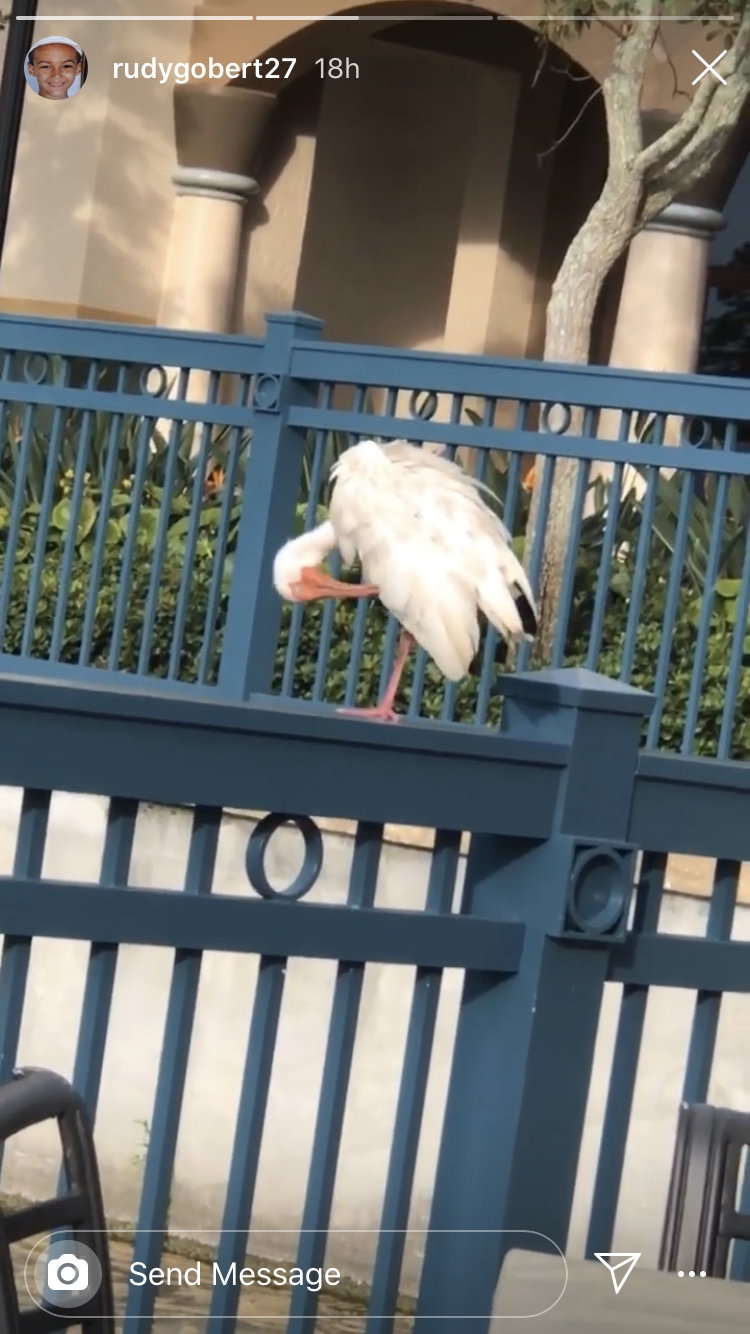 This week Gobert became momentarily transfixed by this freaky bird. It sat on the railing pluming and preening while Gobert zoomed in and out, in and out, trying to get a handle on the thing.

Rating: I think it’s a white ibis? But Bubble Bird Watch is a whole other column.

Whiteside underwent an acute experience of losing his grip on space and time this week. As he notes in the video, he went to call Tyler Johnson and was left feeling confused when Johnson didn’t pick up. What were they going to discuss? Strategies of how to come out of their respective conferences and meet at the proverbial center stage? We’ll never know, because the conversation never happened, because Tyler Johnson was in the middle of playing a basketball game. Whiteside can’t believe it, “He’s playing!” he says to an empty hotel room, then, quieter, “That’s crazy.”

Rating: Maybe he was calling to confirm the time of the Nets next game, so he could go and watch. Oh.

Conley returned to the Bub this week after his wife, Mary Peluso, gave birth to their 3rd child. First, big shout out to Mary for being like, “I’m good” with a newborn and two young kids at home. Second, Conley of course is in mandatory quar and can’t leave his room. Mitchell and the boys made a midnight run in a half Say Anything style gesture and half your well-meaning friends pulling up outside your place and leaning on the horn for a solid twenty minutes.

“It’s Mike!” Mitchell repeated, while someone else shouted, “Michael?!”

Rating: What I’d give for Conley’s version of this vid but damn if that man doesn’t live wholly in the moment. 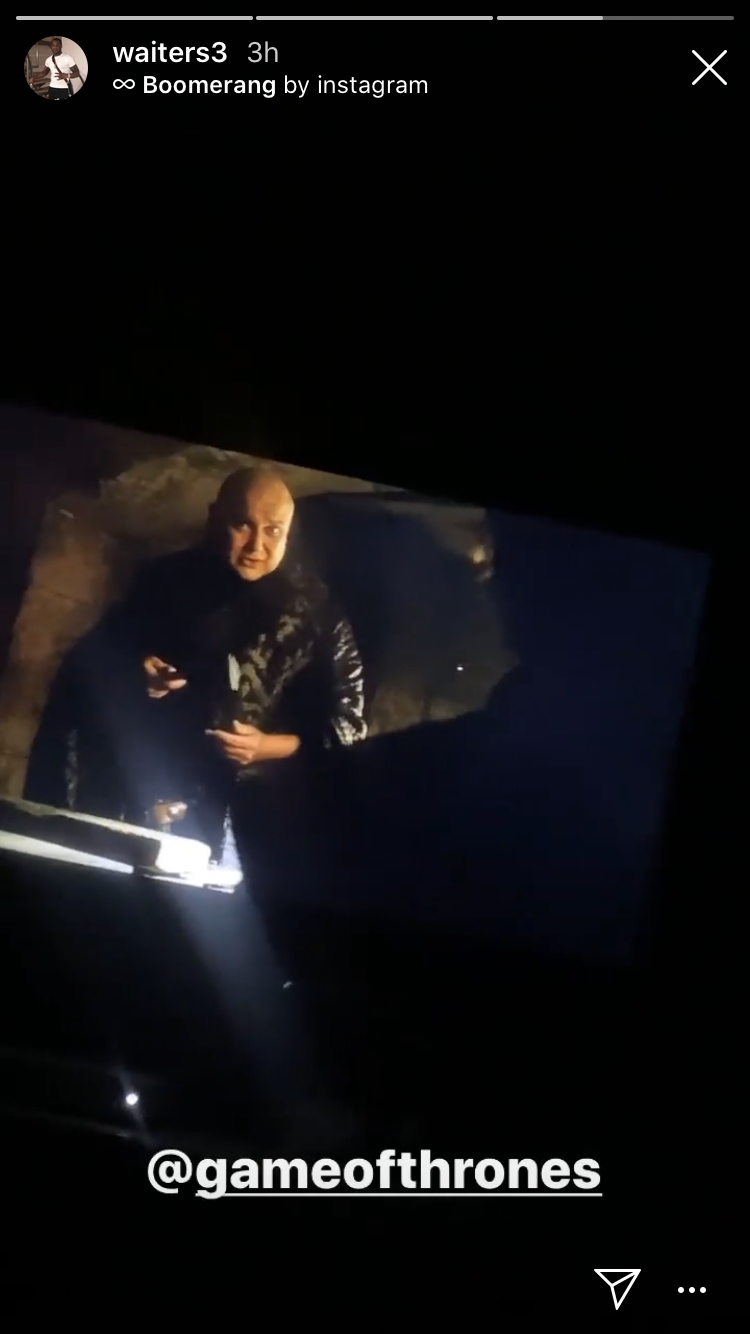 Waiters is still watching Game of Thrones but he gave no narration this week, no preamble, so my sense is he’s just past the Red Wedding and realizing this whole thing isn’t gonna get wrapped up any time soon and we stand to lose some guys along the way.

Rating: Not an ideal point in the arc for where the Lakers are at. 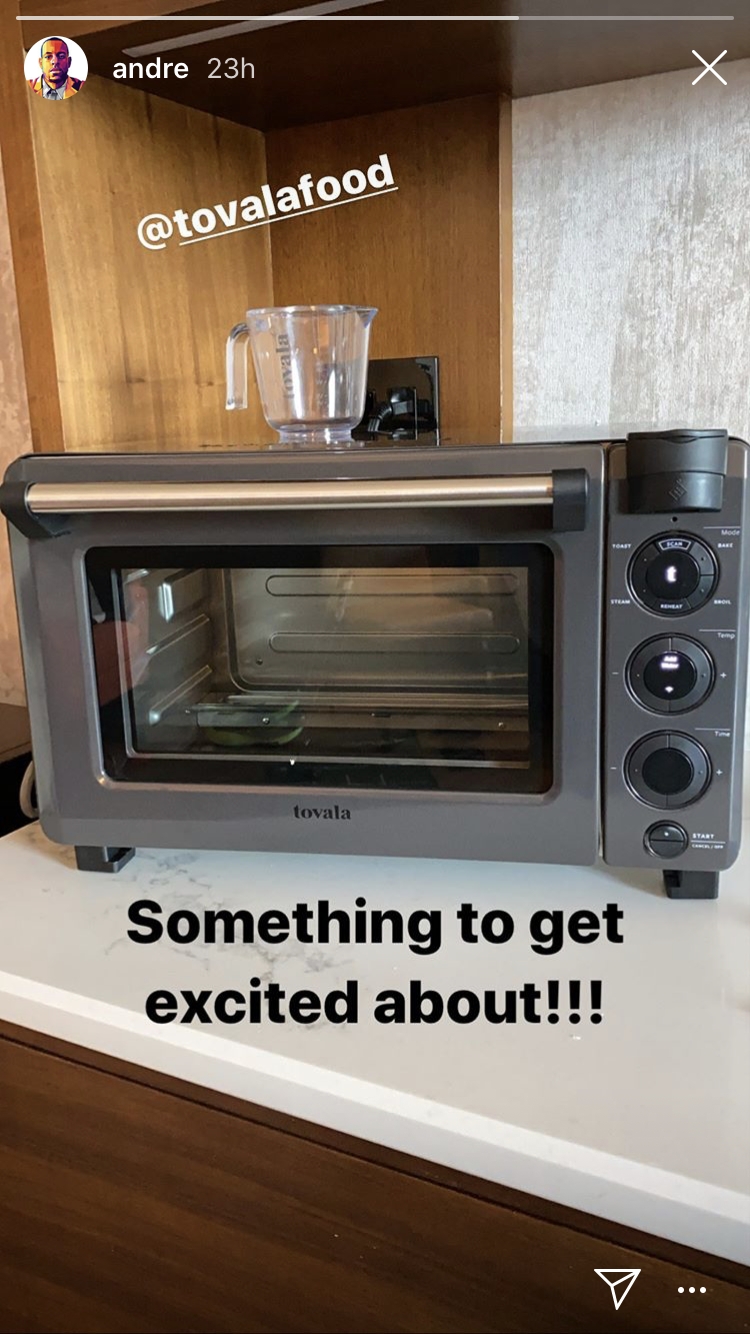 Look, we all know that when you get older you take your joys in life from the simpler things. Still, Igoudala, perhaps telling on himself with this one?

Rating: After reading up a little more, this over needs you to scan things for it to know how to cook your food. Maybe a time Iggy wished he wasn’t so rude to his Gen Z Grizzlies teammates in case he needs to call somebody up for tech support. 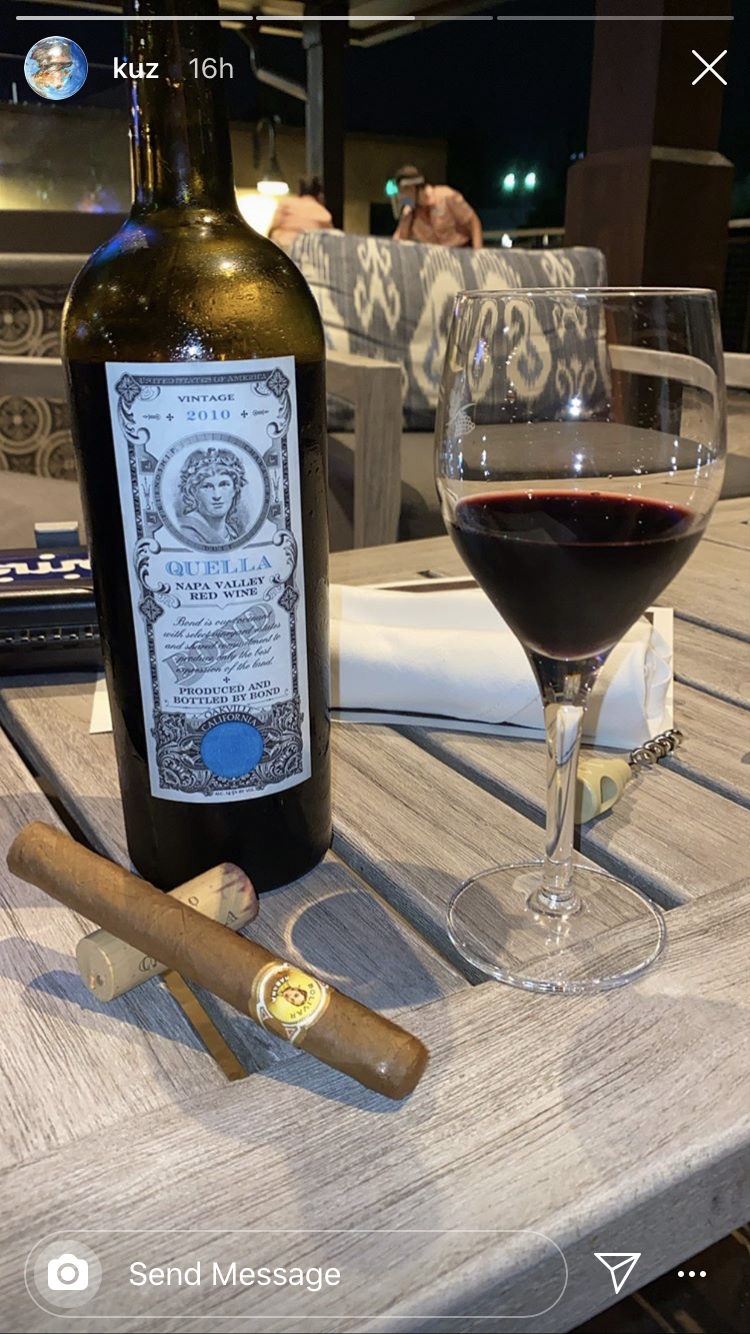 Kuz took a page out of Tucker’s book but when you’re not typically living your life one refined mile at a time, a scene like this seems… sad? Because I’m inclined to say this thing probably has a fruit punch flavor, I have once again called in resident cigar expert, Robby Kalland for comment:

We have two options here, one, Kuzma has the plug on Cuban Bolivars and for that, I commend him (and also, holler at ya boy, Kuz). The other option is he is having a $500 bottle of wine with a $3.50 Dominican Bolivar (if so, holler at me for some better recommendations), but either way I love this. The herfador in the background is a veteran cigar traveler move, and there’s few better late night vibes than a nice glass of red and quality stick. As we all know, Kuz is all about the vibes. 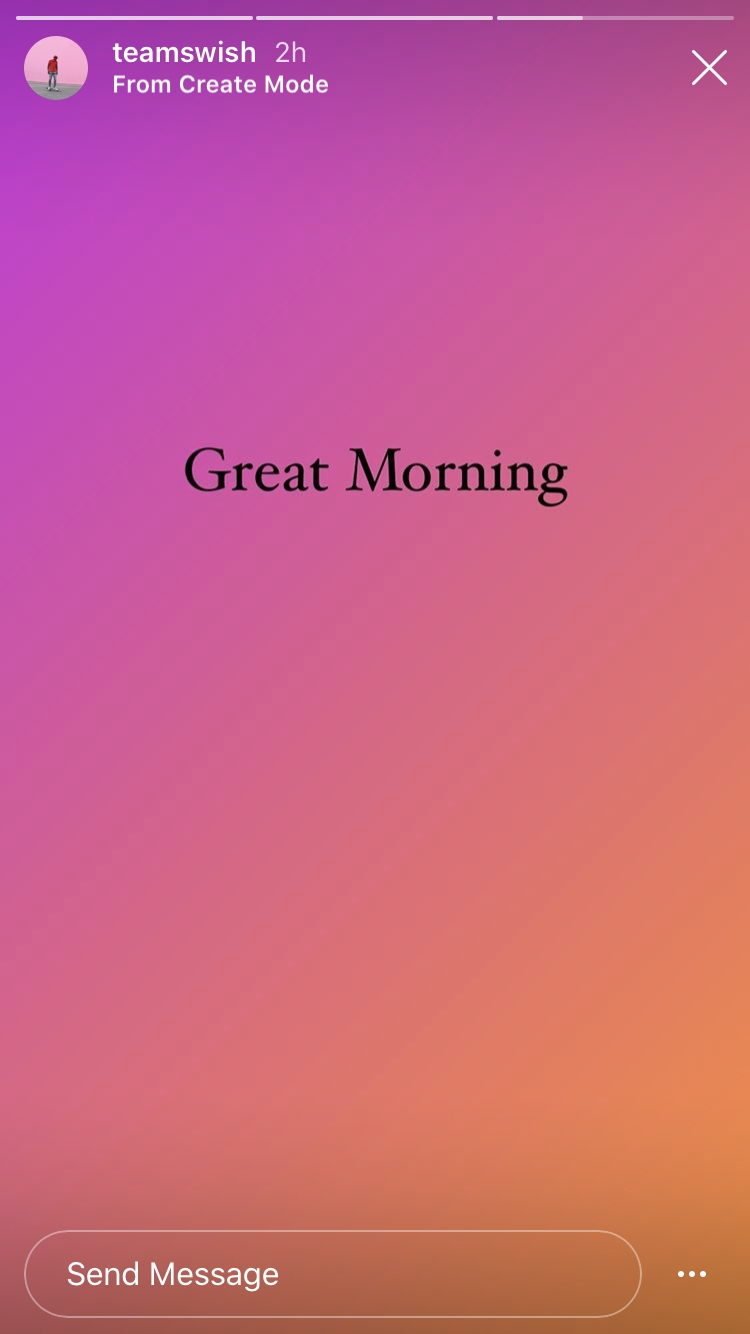 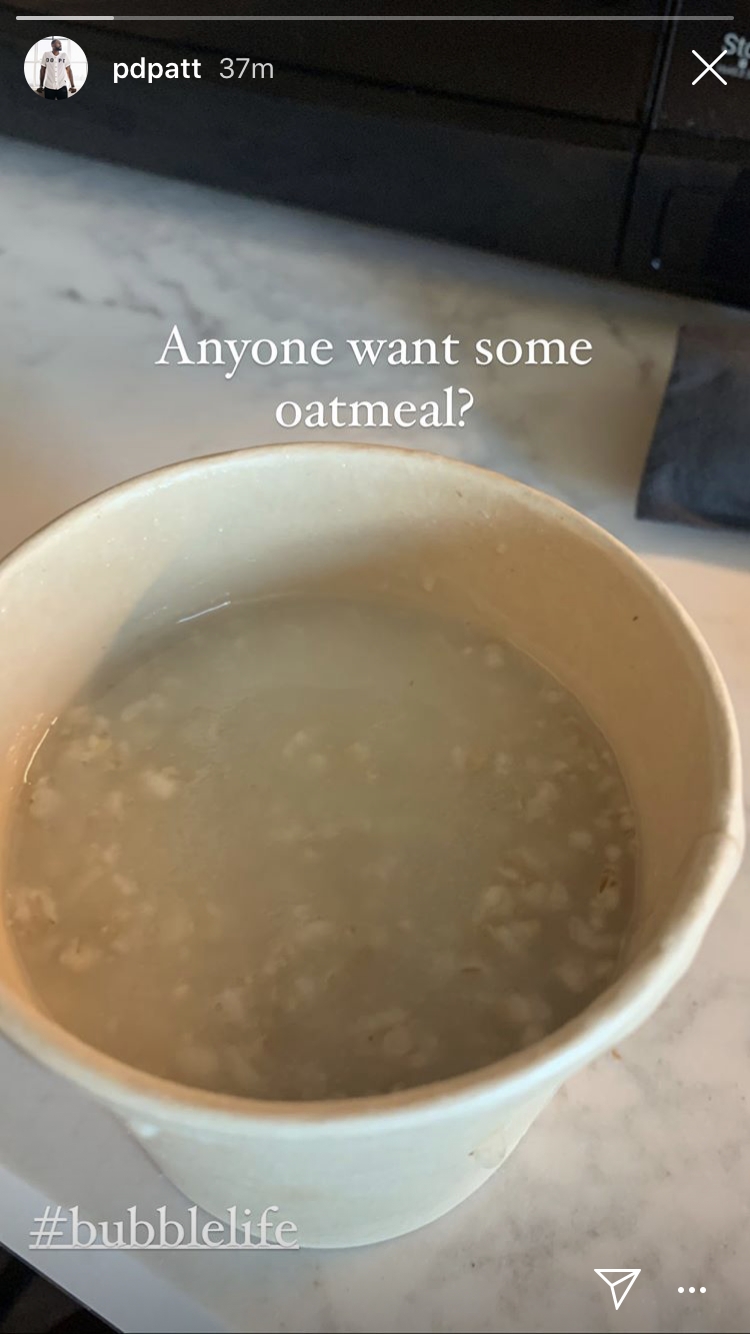 No thank you, Patrick! 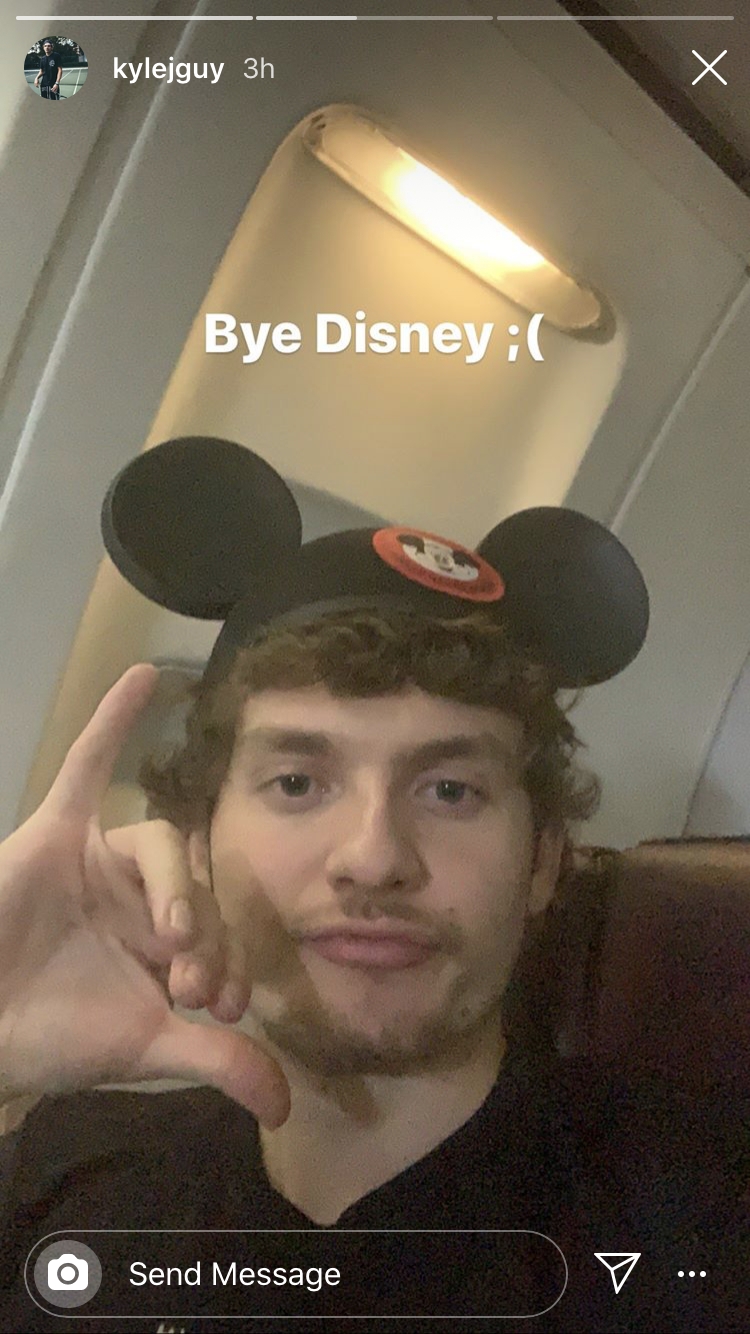 This one’s a bittersweet bummer. Guy, who has been a two-way player for the Kings all season, was picked as a last minute addition to round out their restart roster. Not only did he give it his all, but he was all-in on being there for his teammates, just the most positive bubble Guy.

Rating: Hang loose out there in the wide world, good buddy. 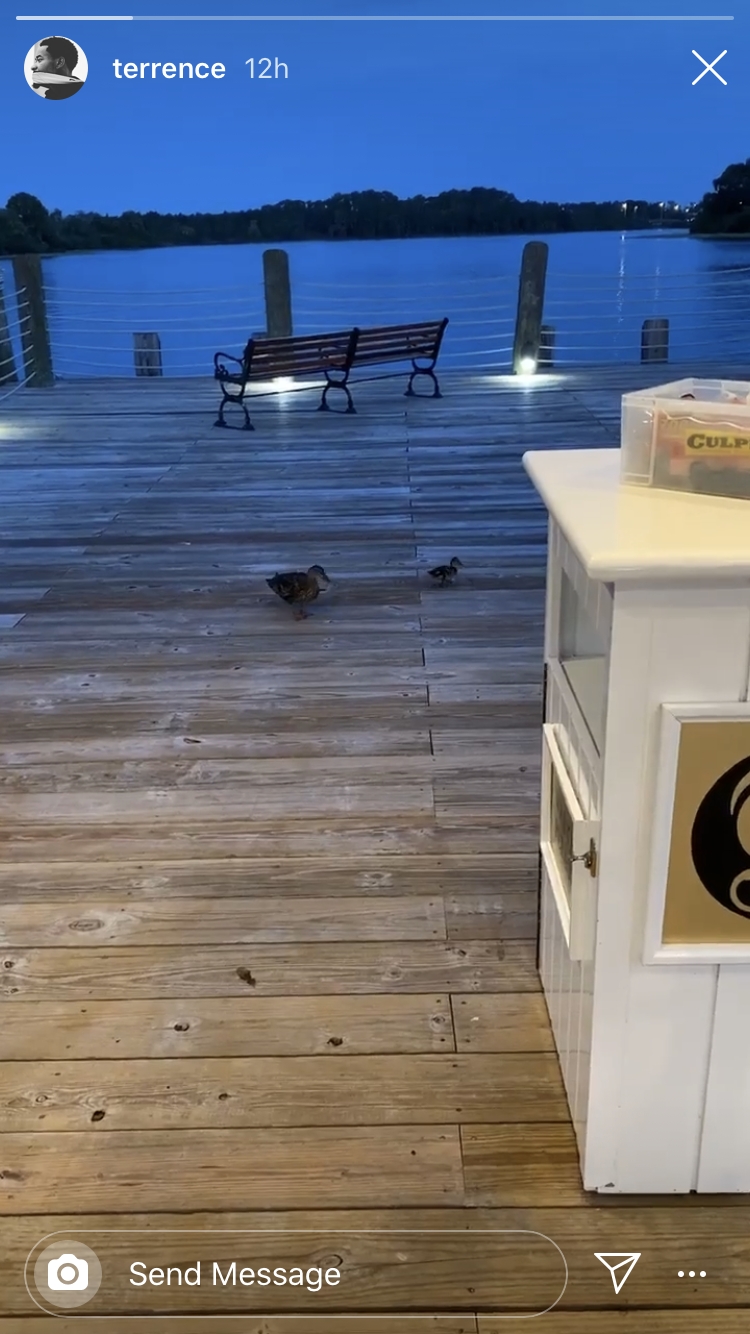 Terrence Ross stays hot on the trail of the new proud mom, the Grand Floridian Mallard Duck. Ross spotted the small family out for an evening stroll on one of the boardwalks adjacent to the hotel and its many, swampy ponds. He wished them a good night.