Ah yes, the age old question, if two gigantic men wrestle each other into a resort pool and no one is there to tell you about it several days later, did it really happen? As mentioned in last week’s Watch, things are naturally slowing down at Disney. This kind of territory is for people who wake up at 2 a.m. and work out until 6 a.m., labor over making an impeccable coffee, and then call their friend Mark Wahlberg to chat as the birds and slovenly people of the world finally wake up — so, for Jimmy Butler.

Still, there are a few morsels to sustain us as we round out what might be the culmination week for the Eastern Conference. This won’t take very long so please, join me. I swear you’ll be out of here in under five minutes.

James wailed thoughtfully on the old tin sandwich for a while this week, just sort of moseying his mouth to get a feel for the wheezing range of tonality the instrument provides.

Given that one of the laws of the natural world is LeBron James will excel at anything he put his mind to, here are the songs I think we’ll be seeing recorded and released by him before his time in the Bubble is through on a covers album called, “Blues MVP”:

“The River” by Bruce Springsteen
“Piano Man” by Billy Joel
“He Ain’t Heavy He’s My Brother” by The Hollies (dedicated to J.R. Smith)
“The Wizard” by Black Sabbath

Rating: Honestly NO Blues Traveler. It seems too obvious and James would never admit to traveling, even by proxy.

There’s been much adieu about the Celtics down this last stretch. Last week this hard-hitting column dedicated some reserves to figuring out what those mysterious CLANKS in Boston’s locker room after Game 2 were but this week, well this week the team decided to bury the hatchet in shallow, very chlorinated water. Marcus Smart and Enes Kanter did a bunch of poolside wrestling to get their frustration out while a young Deuce paddling around with his dad Jayson Tatum in the background just tried to get his laps in.

Rating: The whole team might have to take to the waterslide soon and go down in one long trust train, just given what is going on out there on the court.

Here we have Kanter and Fall getting down and depressed in the player’s lounge on a Saturday afternoon in September, giving us their somewhat tentative rendition of “Ain’t No Sunshine” by Bill Withers. Maybe they were just warming up? Maybe this was practice for a talent show going down later tonight? Either way, perhaps not the most auspicious song choice considering where the Celtics are currently at but who knows, they could be getting ready to sing this to the Miami bus in the event that it departs before they do.

Rating: Here’s hoping they get the words down, there are really only about a dozen of them in total.

Remember last week’s saga when Dragic had to search high and low for a cup of Big Face Coffee, and ultimately turned to its competitor, Little Face Coffee? And then, because he is a phenomenal brand ambassador for himself, Jimmy Butler gave Dragic a complimentary cup and we speculated the value of that beverage essentially being priceless? Well guess what, either Jimmy Beans came to collect or Dragic ponied up, or, Butler saw another branding opportunity and expanded his merch offerings with this hat Dragic put on to prove he’d paid the ultimate price.

Rating: As far as ultimate prices go, $20 really isn’t all that bad.

The Friendship of Jimmy Butler and Mark Wahlberg 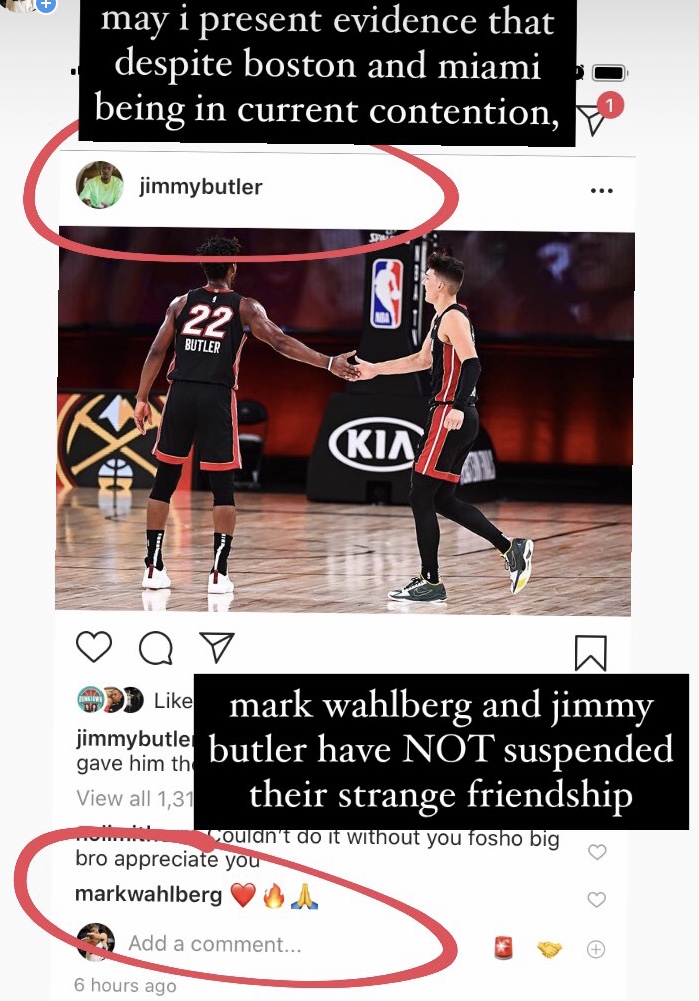 As you may or may be lucky to not know, Mark Wahlberg (Ted, Wahlburgers, Ted 2) and Jimmy Butler are great friends. My sick psyche started to wonder this week whether or not the two were in communication right now, given Wahlberg’s devotion to the municipality of Boston and its representation in the Celtics, and Jimmy Butler’s vocation. Had the friendship gone on hold? Had they discussed this possible eventuality in advance? Fear not, anyone other freak kept awake at night by this question, they’re still talking.

Rating: Wahlberg loves when his number one guy supports his other guys.