Baseball And Football Are Your Parents’ Favorite Sports, Basketball Is The Future

All sports are not created equal, even though we love them all equally at UPROXX. Football, specifically the NFL, is the most popular sport in America, overtaking baseball over the last 30 years and becoming akin to a new religion practiced every Sunday. But in a recent piece by the Washington Post, it’s clear the tides are shifting, and basketball could become America’s newest favorite pastime.

The strongest evidence for declaring such a bright future for basketball stems from the median age of NBA fans.

Over the past decade, the average viewer of ESPN’s professional basketball broadcasting hasn’t budged at all—it’s been 37 years old since at least 2004. The average football viewer, however, has climbed from 43 years old to to 47. For baseball it has been even worse—it has gone from 46 years old to 53.

Here’s a handy chart the WaPo provided if you’re more of a visual learner: 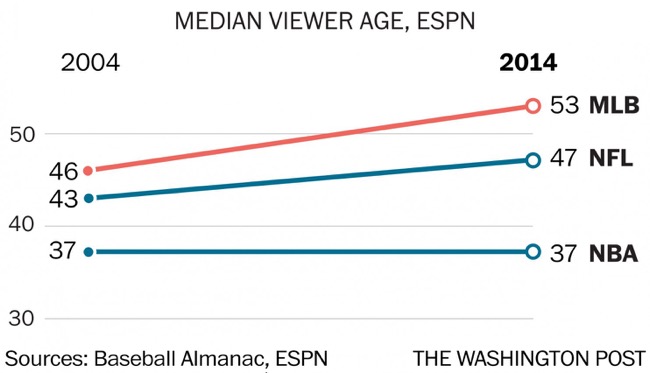 This isn’t groundbreaking news and there are a list of possible reasons we can infer from that data.

Baseball’s popularity lies in its timeless quality, since it became the titan of professional sports in the 20th Century. But this same strength is also its weakness. Baseball has an inability to adapt or adjust to a world that’s constantly in flux. The increasing Bill James-ification of baseball has done wonders for understanding the mathematics behind a game with a heavy reliance on statistics for decision making (and not just a movie starring Brad Pitt), but it’s done little to add to its lagging sex appeal.

Football is still the most popular sport in the land, but the violent nature of the game has made avid football fans starkly opposed to their children participating on the gridiron at the youth level. The concussion lawsuit the NFL settled with 4,500 litigants for $765 million (a pittance to the NFL as a whole and to those former players shelling out a fortune in medical costs) is just the beginning of future legalese that seems like a foregone conclusion in a league where 300-pound men slam into each other with the force of a freight train. Football players are only going to get bigger and faster, so if you think you’ve already read the last piece on chronic traumatic encephalopathy (C.T.E.), then we’ve got a bridge we’d like to sell you.

Plus, MLB still doesn’t allow game footage easy upload access on YouTube or elsewhere on the Internet. Same with the NFL, which has to protect their billions from those nefarious bloggers. God forbid fans delight in re-living their favorite moments from previous games.

There are plenty of reasons people will still watch football and baseball, but the NBA is the future. Here’s more evidence from the Washington Post:

That’s not all, as the Washington Post also mentions a Forbes article on the top 100 highest-grossing athletes in the world. Major League Baseball had 20 players on the list with a collective 12 million Facebook followers. The NFL had only 13 players who were in the top 100 (the NFL severely underpays it’s employees, especially considering the risks players take every Sunday; they really need a tougher player’s union), but their combined Facebook presence didn’t even crack 10 million followers.

Conversely, the NBA had 18 players in Forbes’ top 100, and combined they had over 150 million Facebook followers. Facebook might be your parents way to interact online, but consider that the NBA’s official Twitter account has 13.8 million followers. The NFL has 10.8 million, MLB has 4.3 million and the NHL has 3.3 million.

NBA Twitter is rapidly expanding, and the way highlights are so easily packaged for the online world with vines, GIFs, and video dominating our Twitter timeline on any given night, makes it a lot easier for fans to share — hence, the surge in the NBA’s popularity. Even League Pass Broadband has gotten better; although, we hope they continue to make things easier for us by making adjustments to previous problems.

Then there’s the actual players’ presence online. Off-court hijinks by NBA players have become almost as important to the media’s consumption as the actual games [here’s where our Old Man would grumble about the kids in-between diatribes about the three-point line ruining the game]. NBA scribes used to get summers off, but now there’s the draft at the end of June, the July free agent frenzy, Orlando and Las Vegas Summer League and all of a sudden it’s time for training camp. NBA writers can barely afford a vacation; there’s just so much to cover because the culture is often more important than the game itself [cue another disgruntled comment from our Pops].

Aside from its popularity online, and the plateaued median viewer age, there’s never been a better time to own an NBA team. The new NBA TV-rights package taking affect next summer has Disney and Turner dropping $2.67 billion in the NBA’s coffers each year for almost a decade. That is a ton of moolah for a league that’s only making around $900 million annually in it’s present deal.

The Milwaukee Bucks sold for $550 million last year after Forbes valued them at $400 million earlier in the year — the lowest in the NBA. The Clippers then sold for $2 billion this past summer, an NBA record. Yes, Blake and CP3 make them more alluring than they’ve ever been for casual fans, and anyone who replaced Donald Sterling was like the caring new boyfriend after the unemployed alchie got dumped. But the Clippers still sold for $2 billion! That sentence would have you laughed out of the bar as little as 10 years ago.

Basketball is the future, and it’s not just for the reasons listed above. Here are a few more:

– Basketball players don’t wear helmets like they do in football and hockey, giving fans a first-hand look at all the emotions that flit across the faces of athletes in amazing moments of elation and in the doldrums of defeat.

– There are simply fewer basketball players to keep track of. NFL, MLB and NHL rosters are all significantly larger, and so individuals reign supreme in the NBA. A great quarterback won’t necessarily win the Super Bowl every year, and the same goes for an amazing pitcher or a center in hockey. But the best NBA player — probably LeBron at present — is almost always playing the big games at the end of May and into June. Teams win championships, but there are only five guys on the court at once. A superstar can drag even a motley crew close to the promised land (i.e. Allen Iverson in 2001 and LeBron James in 2007).

– There’s a poetry to the movement on a basketball court that the stop-and-start movements in baseball and football lack. Yes, hockey has that same bit of freewheeling creativity, but it will never replace the other three sports in the American consciousness. Most Americans have already relegated it as “Canada’s thing.”

– Basketball doesn’t take as long. Yes, this might mask an ADD problem among the youth of America, but 48 minutes — even with the influx of all those TV timeouts — is a helluva lot easier to get through for a small child than a 60-minute football game or the endless hours it came sometimes take to play nine innings of baseball.

We’re trying to avoid pejorative #phrasing like basketball is better than baseball and football even if that’s how we actually feel.

We eat and sleep hoops eight months a year and can’t wait for it to come back mere days after the season has ended. Nary a night goes by during the season where we’re not flipping on 4-5 hours of League Pass, or ogling at the on-off numbers or player efficiency ratings of our favorite players. Basketball is our life, so it makes sense that it’s replacing football and baseball among the millennials who are the new sweet spot for advertisers.

What doesn’t make sense is why baseball and football higher-ups aren’t a little more concerned about the trend. Basketball is poised to own the next decade of sports fandom, and it’ll only grow from there with more money, expansion overseas and a ubiquity that only makes it grow larger by the day.