Here’s the thing about puking up candy: It’s not as delicious coming back up as it is going down. Your parents probably knew that. That’s why they took away all your loot when you came home from trick-or-treating and only allowed you a rationed amount each night. There’s an order to these things, and while you were probably angry that your mom and dad ripped the chocolate from your grubby, sugar-dripping fingers, they really did it for your own good.

No one person is supposed to have that much sugar in their system at one time.

You knew this, deep down, so you never made good on your threat to eat only chocolate cake and Cinnamon Toast Crunch when you became an adult. It’s just unnatural. No, to call it unnatural is an understatement. Eating an entire bag of candy is an affront to nature—an abomination. I should know, because I ate two entire bags of candy in a single day. And then I ate another bag of candy on top of it. Not for science. Just to see if I could. Which is how I ended up on the floor in my bathroom, crying while half-digested skittles poured out of my gaping maw in a grotesque rainbow of fiery reds and dull browns.

The idea to eat 10 pounds of candy came to me several weeks ago. Too old for trick-or-treating and just having embarked on a whirlwind love affair with marijuana (for medicinal purposes, of course), I was thinking of something fun to do for Halloween when an ad for Snickers (maybe Crunch? It’s all a blur now) came on the TV.

“Man,” I thought, ”I would love to eat a whole bag of candy. Just pound the entire thing down my gullet.”

Then, rather than thinking rationally about the matter, I made the foolish decision to do it.

“I’m an adult,” I said to myself. “I can buy my own candy. And no one can tell me not to eat too much because I have rights.”

So, I put on my clothes and decided to go down to the store to get some. Then, an episode of Bob’s Burgers I really liked came on so I sent my husband to the store instead. That’s not to say that I’m lazy, though. It’s because I knew that I would need my energy to consume more candy than any human had ever consumed before (probably). (Also, I am very lazy.)

An hour later, my husband returned home with three bags of candy, heaving under their combined weight.

“I didn’t know what kind you’d like,” he said, “so I got you a little of everything. You can pick and choose.”

But the project wasn’t about “choosing” — it was about indiscriminate, unabashed gluttony. So, I decided I would eat all of it. Right there. What’s the worst that could happen?

“Could you just think about this?” My husband pleaded. “Like, really think about it? I don’t know if our insurance will cover this if something goes wrong.”

“Sure, sure,” I said, ripping open a bag and unwrapping a fun-sized Crunch bar. I popped it into my mouth. It was so delicious. Why hadn’t I thought of doing this before I turned 30? How much candy had I been missing out on?

When the bags were all open, here’s what lay in front of me:

Number of candies: Unrecorded. But a lot. This was a bag manufactured for Costco, so it probably had enough sugar in it to murder an entire colony of diabetics. If you measured diabetics by colony, which we don’t. So, let’s just call it “approximately 150.”

Calories: 7,000? 10,000? Does it really matter when we’re all just going to die, anyway? I didn’t think this when I started chowing down on Sour Patch Kids and Everlasting Gobstoppers, but I certainly did think this when my brain went fuzzy and just wanted to be buried in candy wrappers and call it a life.

Initially, I had only planned to consume two bags, but because the whimsically named “Funhouse Treats” pack included both Mike & Ike’s (which I hate) and Hot Tamales (which are literally worse than any other punishment on earth), I thought I would skip those two and make up for it with the Hi-Chew, even though they were theoretically for my husband to take to work. But Important Journalism>work friends, so I convinced him to let me eat those too, despite the warnings of the Oompa Loompas who materialized out of nowhere and began singing menacing songs about about gastrointestinal distress.

“YOLO, motherfuckers,” I said mid-fever dream as I jammed a Twizzler into my mouth. “YOLO.”

When I’d first conceived this project (let’s call it “performance art”), I had grossly overestimated the number of candy pieces that would be in each bag. I’d expected to have to eat 700, maybe even 800 pieces of candy, so learning that I’d only have to eat about 300 made me think this would actually end up being too easy. And for a second it was. The first twenty pieces (all chocolate) went down without a fight. Soon, there was a brown ring around my mouth which my husband pronounced “disgusting.” Then he walked out of the room, leaving me alone with around 280 more pieces of candy to go. Piece of cake.

And it was. For about another twenty minutes. I’d slowed down by this point so while my initial intake of peanut butter cups, Milky ways, and Snickers only took me about five minutes, the next thirty or so pieces took me four times that amount of time to consume. And, because variety is the spice of idiotic-eating-challenges, I’d also added a couple of packets of Sour Patch Kids. These gave my throat a somewhat painful burn that I should have considered. But still, I was doing fine. This was great. It was everything I’d ever wanted to do. I was flying high. Riding the bow of the Titanic.

“How are you doing in there?” My husband asked, walking through the living room to make sure I was still alive.

“I’m the king of the world,” I slurred back, throwing a handful of candy wrappers into the air. See kids, you can live your dreams.

It took me an hour to get another 50 pieces down. I wasn’t keeping a strict count, but the giant pile of candy I’d gathered before me was growing steadily smaller, and I was certain that by this time I’d eaten at least a 100 pieces. I’d taken a short break to remove all the candy that I didn’t like from the monument of sugar on my floor (because I’m an adult who makes good choices), but that was a bad idea, because as soon as I’d slowed down on consumption my stomach began to ache. And ache. And ache. It was official: I was full.

This would be a good time to mention that aside from knowing the number of sugar bombs in each bag, I had no idea as to their weight and/or calories. I’d initially thought it might make it harder to eat the candy if I knew. Surprisingly, stuffing over a hundred pieces of mass-produced sugar into my face was hard enough anyway.

At the halfway point, I wasn’t sure I was going to make it. Aside from my guinea pigs (which I brought out into the living room for emotional support), nothing was helping me eat more candy. Motivation had dwindled. The “point” (if there ever was one) had been lost. The thought of eating another piece nauseated me.

Trying to rally, I grabbed a package of Starburst and began peeling the plastic off. The problem, of course, is that, aside from being packaged, Starburst are also individually wrapped, making opening them a minor chore in general, but a horrible ordeal when you’re drunk on sugar and regretting every life choice that brought you to this point.

Executive decision time: If sugar wasn’t going to hurt me, I reasoned, then a little paper wouldn’t either. I shoved both pieces of candy into my mouth still wrapped. Here’s an important realization for anyone who’s having any problem unwrapping their candy this Halloween: it makes very little fucking difference. This isn’t something I ever thought I’d become an expert on, but there you go.

I managed 200 pieces (approximately, as the bags say) before I had to stop. It wasn’t really a choice I made as much as a mutiny my body launched against me. The candy felt like it had congealed into a solid mass inside my stomach, throwing off my center of gravity. I stood up for a second (up until this time this was a couch and floor-based experiment) and realized that I was going to have to wander over to the kitchen for a drink of water. Halfway there, listing left and right, I knew that if I poured myself a glass of water it wouldn’t be inside me for long.

Not feeling particularly sick, but distinctly uncomfortable, I changed course and rambled into the bathroom where I was able to collapse next to the toilet only moments before my throat opened up and my belly released all its contents. This was not how I had expected my day to go, but it was also somewhat of a relief.

“What’s going on?” My husband asked, walking in on me as I said goodbye to what appeared to be an un-chewed bit of Almond Joy (a candy I don’t generally like but had swallowed because I assumed that the coconut would be a soothing coating for my stomach… just like milk might have been if I had considered it earlier).

“Milk,” I mumbled, “is what they give people who have accidentally drunk Drano.”

It wasn’t exactly in the flow of conversation — but it made sense in the moment. Now, in retrospect, I wonder if drinking Drano might have been less painful. I’ve never tried Drano, of course, but I have tried to eat 12 pounds of candy and I can tell you it’s absolutely miserable.

Let me tell you two more important things I learned from this little experiment:

First, throwing up candy burns and I wouldn’t recommend it. I doubt it’s so bad if it’s just chocolate, but once you add fruit flavors, sour stuff, and Hi-Chews into the mix you’re just asking for your esophagus to turn into a molten pit of lava.

Second, quitting is for quitters, so I finished that candy. It took me two more days and no one thought it was a good idea, but I needed to do it — to challenge myself and to really prove that I could make and keep a commitment. (Even a ridiculous commitment.)

Oh, and one more thing: When you throw up Twizzlers, it looks like blood. Just thought you should know. 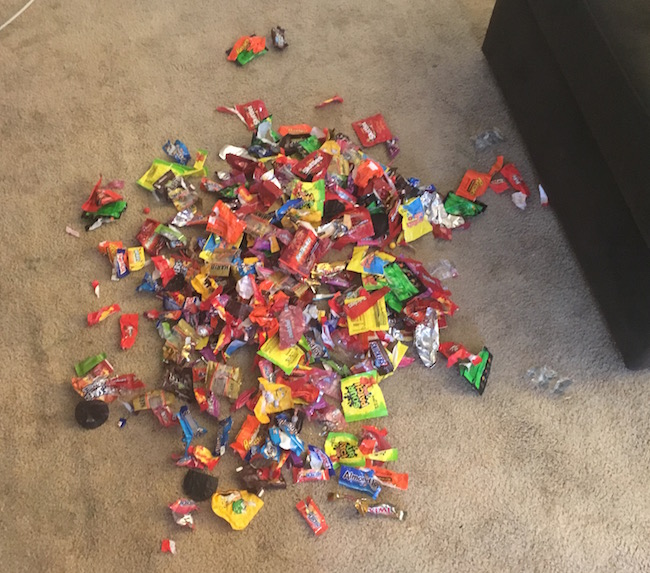