Bad food on Twitter is everywhere — from Scott Walker’s disturbingly grey kebabs to the stuffed pepper jack o’ lantern on Air Force One. The latest luminary to have his dubious attempt at comfort food go viral was former Georgia and Miami football coach Mark Richt, for his widely dunked-on birthday feast of “hot dog delight.”

The basic unphotogenic nature of this dish combined with the fact that Richt was apparently eating it to celebrate his birthday made it reminiscent of both Scott Walker’s sandwiches and Kirk Cameron’s infamous Subway sandwich birthday party. A trend piece would be tempting here, but I wouldn’t want to lump Richt — who adopted two kids from the Ukraine and started a mentoring program after one of his former players committed suicide — in with those, ahem, people (college football writer Spencer Hall described Richt’s coaching style to me as “chill pastor”).

Of course, he’s still a football coach, and football coaches are notoriously odd. Which in this case manifests itself in a life-long desire to eat bad barbecue food arranged in an undifferentiated vomit-like pile. Yum!

I think it’s important to sample the delicacies of other cultures in order to maintain a full understanding of humanity’s rich tapestry. So, I set out to recreate this “Hot Dog Delight,” the Official Birthday Dinner Of College Football. This was a task made easier because unlike my last attempt, the Air Force One Pepper Lantern, there’s actually video of Richt describing exactly how to make Hot Dog Delight:

Last year, he gave you the 10-bite sandwich. This year, Mark Richt delivers the recipe for Hot Dog Delight. pic.twitter.com/wj14uQ5SaW

I went shopping before I found the old video of Richt saying Van De Camp’s beans, so I bought Bush’s brand because they have the commercials with the talking doggo. I didn’t notice that the can was dented until I got home but it seemed right. I got Ballpark beef franks and some Kraft singles, which I assume are the cheese of choice for someone making Hot Dog Delight. Perhaps that’s presumptuous.

I know how much of a snob this makes me sound like, but I haven’t cooked an honest-to-God hot dog for myself in years. I decided to boil it for a few minutes and then sear it off in cast iron (can you save the boiling hot dog water to make hot dog stock? Maybe).

I have to be honest here: the pan-seared dogs were very good. Kind of smoky with a hint of maple. I had to make an effort to keep from eating them all before I slathered them in canned beans. I’m starting to think people may have over-demonized hot dogs during my childhood and biased me against them. Side note, everyone should own a deep-bottom cast iron fry pan. They rule. 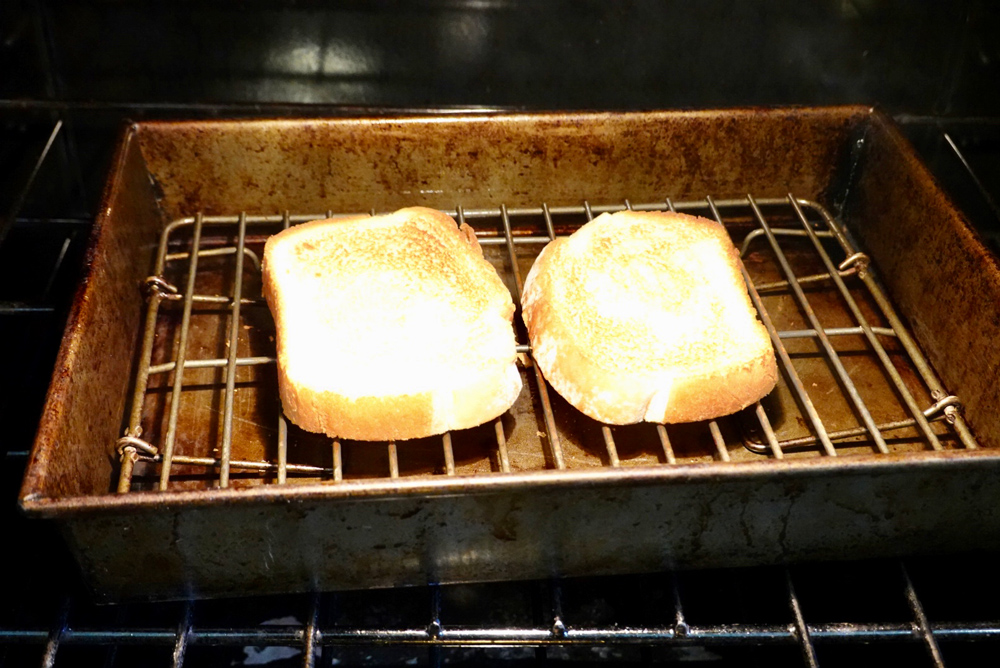 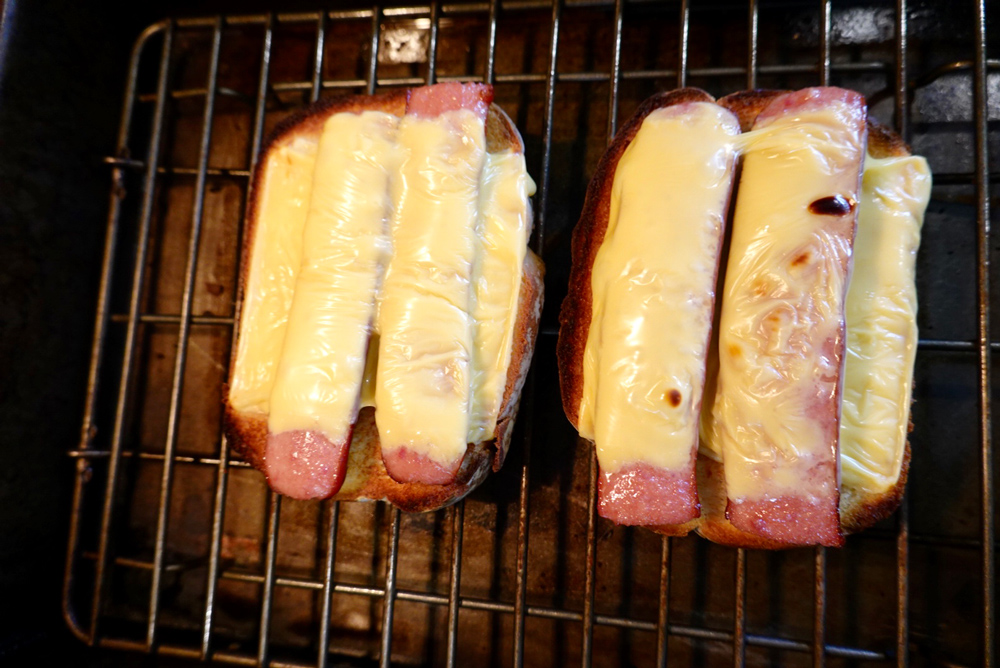 I used the broiler to toast my bread. Then, I added the sliced hot dogs and cheese slices, just as Richt directed. I was hoping to get some nice bubbles and little browning on my cheese, but instead I got … the nasty plasticky film you see above (plus one black spot!). Admitted snob alert #2: I know this makes me a bad American or whatever, but Kraft singles are gross. What’s even the point of this flavorless space age trash cheese? Just spend 15 cents more and get cheddar or jack slices! It’ll be the best 15 cents you ever spend, trust me.

Normally, when I make beans, I fry up a little onion and garlic in oil or fat and then add the canned beans and reduce to make refried beans. This seemed more like a warm-up-the-beans-on-the-stove situation. So I did that and then put everything together like so: Toast with hot dogs and cheese, slathered (there’s truly no other word) with beans, topped off with ketchup stripes. In retrospect, I probably should’ve reduced the liquid in those beans a little more.

The result is … not terrible? Certainly not as bad as it looks. I could see eating this as a late night drunk food, though it does seem like a lot of work for that. If you’re going to put in this much effort, maybe don’t just combine different processed foods? The dish feels somehow both very British (beans on toast!) and very German (weenies and sweet ketchup!). It has a lot of the same flavors as a cheeseburger, only mostly less good.

The worst part about it is that flavorless cheese, again. The beans and cheese seem like they take away flavor more than they add it. It’s also kind of like sweet-on-sweet-on-sweet. The beans are kind of fake sweet. The ketchup is sweet. The frank is a little sweet. Then there’s just some kind of gummy cheese in there for some reason. It’s a lot of one-note artificial sweet flavor. Replace the cheese with mustard and add some onions and/or saurkraut and I think we might be onto something here — you know, like getting towards a chili cheese dog, or something.

As is, well, I think I’d have to have some pretty good memories to go along with this to make it better than the other available options. It’s probably a little like a Warrant song, unless it was there the time you touched a boob at a junior high pool party, it’s probably not going to do much for you now.

An ex football coach did a viral tweet about “Hot Dog Delight.” I decided to try to figure out what that was. Time well spent? Eh, probably not. (Videographer credit @__emilybee__)

So, what did I learn from this? Well, I discovered that a well-treated hot dog is still pretty good. Don’t sleep on hot dogs, people. And that they probably still taste better when not covered in baked beans and, ugh, Kraft cheese. That’s just weird, man.

If you see any terrible food online, please email me so that I can attempt to recreate it.