From ‘Twins’ To ‘Maggie,’ The Reinvention of Arnold Schwarzenegger 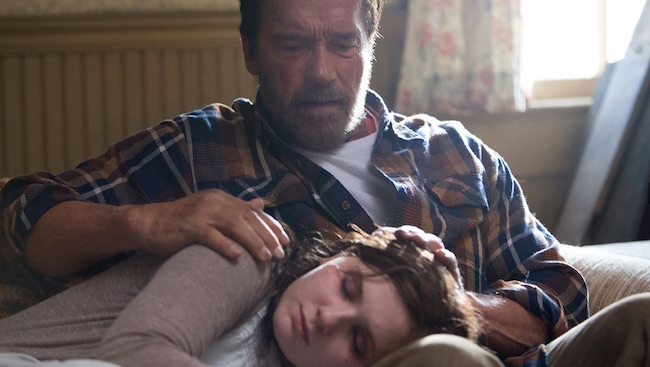 For the longest time, my favorite Arnold Schwarzenegger film was Twins. Now, I had seen movies like Terminator and Predator (and probably even The Running Man) more times — those movies seemed to have a longer cable television lifespan — but Twins always made me happy. It made me happy because here’s Schwarzenegger, known at that point only for bodybuilding and action movies, trying to make a comedy. He was really trying, and I’ve always had a soft spot when someone is trying something different.

Looking back, maybe Twins wasn’t that big of a risk. If it would have failed, I suspect Terminator 2: Judgment Day would have still happened. But it would have been embarrassing for Schwarzenegger, proving he was nothing but a one trick pony. And, sure, people accuse him of that anyway, but he is legitimately funny in Twins and it’s a shame he didn’t do more straightforward comedies that weren’t Kindergarten Cop (more of an action-comedy) or weren’t schlock like Junior (which is almost not a comedy, despite the premise) and Jingle All the Way.

Schwarzenegger’s return to acting since his stint as the governor of California has not gone particularly well. (And it’s still a little weird; could you imagine if Reagan left office and just started making movies with monkeys again?) There’s nothing particularly memorable about The Last Stand or Sabotage, and Expendables 3 — the only film of the three in which Schwarzenegger plays a large role in the film — made the least amount of money of the three Expendables movies. (Escape Plan, another movie in which Schwarzenegger played second fiddle to Stallone, was a modest hit.) Worst of all, Schwarzenegger isn’t really trying. He’s acting like an athlete returning from an injury who just wants to ease back into things before actively trying to push himself. To this point, Schwarzenegger’s strategy has pretty much been to show up and look at the camera as if he’s saying, “Hey, it’s me! Can you believe I’m back? Well, believe it, because here I am.”

This narrative changes with the release of Maggie, a movie in which Schwarzenegger really is pushing himself to do something different. And, like with Twins, I find it impossible not to root for him.

Abigail Breslin plays Maggie, a teenage girl who has been bitten by a person infected with a deadly disease (from this point on, “person infected with a deadly disease” will be refereed to as “zombie,” even though that’s not a term from the film) and only has a few weeks before the disease also turns her into a zombie. Schwarzenegger plays her father, Wade, who pulls some strings to get her out of quarantine so that they can spend a few precious last weeks together.

It’s almost a shame this movie is about zombies at all, because I fear there’s a zombie fatigue setting in that might automatically alienate people when they hear “Arnold Schwarzenegger zombie movie,” because even having seen Maggie, my first instinct is to think of something different after reading those four words together. And for people thinking that this is going to be a movie in which we watch Arnold Schwarzenegger kill hundreds of zombies, they will be disappointed to learn that there’s only one true, jump scare-type scene in which Schwarzenegger has to fight a zombie. He does kill others, but it’s not “cool.” It’s played as sad and depressing. This is a disease that is slowly taking loved ones away, while the infected are 100 percent conscious of what’s slowly happening to them. This is a grim movie.

The thing is, without Schwarzenegger’s involvement, there’s not a lot here. It’s an okay enough story, but basically it’s just about a dying girl’s last few weeks alive, with the added twist that she’s going to be a zombie. There are some interesting themes here, in that we rarely learn much about zombies before they become zombies — the transformation is usually much quicker in other stories — but it’s basically a movie about saying goodbye. The only element that makes it truly interesting is Schwarzenegger’s presence.

Just like how I felt the first time I saw Twins, I have never seen Schwarzenegger try to do something like this before. There’s little action, there’s little to no humor; what Schwarzenegger is trying to pull off is some sort of solemn gravitas. The thing is, he actually succeeds, but only because of everything we already know about Arnold Schwarzenegger before we see Maggie. And I suppose this played into why Twins was so effective; there’s an old switcheroo of expectations at work, which is appealing.

I almost hate that Schwarzenegger will be in his fourth Terminator movie later this summer. It kind of undercuts this almost narrative that Schwarzenegger is somehow adapting his onscreen persona to something different as he approaches 70. Then again, maybe that’s not fair. No one is mad that Harrison Ford, an actor already in his 70s, is playing Han Solo again. Regardless, the fact that Schwarzenegger is in a movie like Maggie at all is an interesting look at perhaps his next chapter.