Crack Open A PBR, ‘Blue Velvet’ Is Coming Back To Theaters

David Lynch hasn’t exactly formally retired, but he hasn’t put out a feature film since 2006’s inscrutable Inland Empire, either. He’s currently busying himself with the upcoming, years-later third season of his cult-classic TV show Twin Peaks (along with the line of coffee beans, the albums of music, and the occasional commercial or music video). Those worried that they may have missed their chance to catch a Lynch classic as it was meant to be seen — in the creeping, invasive dark of the theater — are in luck. This September marks the 30-year anniversary of what many consider to be the director’s magnum opus, the violent fever dream Blue Velvet. So, crack open a PBR and huff a little nitrous oxide, because today brings reason to celebrate: Blue Velvet will return to theaters to simultaneously frighten and arouse a new generation of viewers.

Complete with a recut trailer embedded above and a gorgeous re-release poster embedded below, the film will open at New York’s own Film Forum on March 25 for a week-long run, before expanding to national theaters and a handful of UK cinemas come September. Featuring indelible performances from a tragically sexy Isabella Rossellini, a baby-faced Kyle MacLachlan and Laura Dern, and Dennis Hopper in the role of his life as the crazed, abusive Frank, Blue Velvet remains one of American art cinema’s most unflappably cool creations. Unearthing the hotbed of psychosexual unrest roiling beneath the well-manicured facade of small-town America, Lynch turns traditional tropes of Americana and film noir inside out to deliriously disturbing effect. Complete with beautifully hazy cinematography, an immortal Roy Orbison needle-drop, and the single greatest rendition of the words “PABST BLUE RIBBON” in film history, it’s a cornerstone of modern film art. Do yourself a favor, and keep an eye out once the full list of theaters is announced. 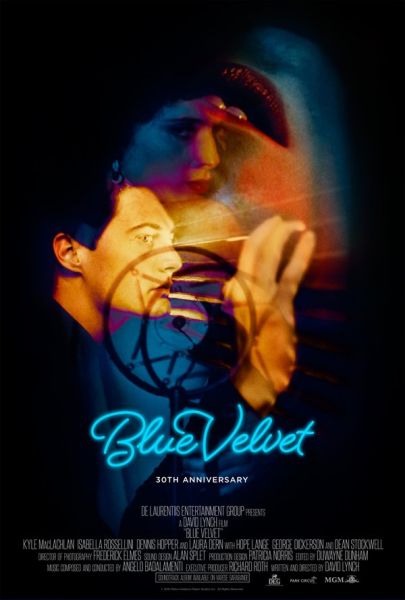