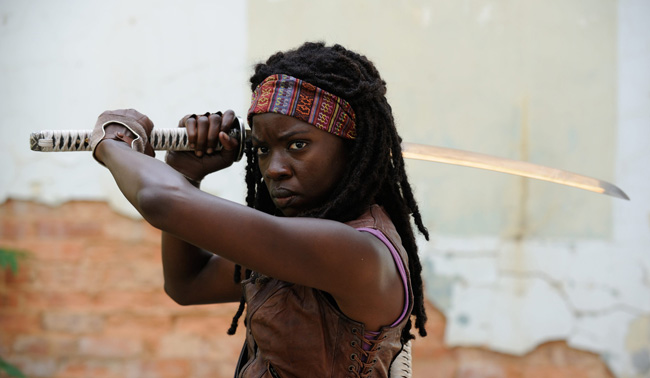 A movie about the life of noted rapper Tupac Shakur has seemingly been gestating for a very long time, but finally, the biopic seems to be actually happening. The film, titled All Eyez on Me, is already in production with Benny Boom as a director and with Demetrius Shipp, Jr. as the late West Coast rap legend himself. However, while the movie may be underway, the cast is still being fleshed out. But there has been an important development with the crucial role of Tupac’s mother being filled by a very familiar face.

Deadline has reported that Danai Gurira will be stepping into the role of Afeni Shakur. You probably know Gurira from her role as Michonne from The Walking Dead. You know the badass lady with the dreadlocks and the samurai swords? That’s her. If violent, gory genre television isn’t your thing, she’s also in the movie The Visitor, and her play, Eclipsed, is moving to Broadway in March.

It’s a pretty daunting task, because not only is she playing the mother of Tupac, but because the actual Afeni Shakur is an executive producer on the film, and is in charge of the life rights of her late son. As such, one can only assume she had a lot of say on Gurira’s casting, and is happy with it.

One would guess the hope is that All Eyez on Me will replicate the success of the N.W.A. biopic Straight Outta Compton. The casting of Gurira is a good start, but there’s a lot more to go to make a good movie.