Director George Miller Talks To Us About The Wonderful Insanity That Is ‘Mad Max: Fury Road’ 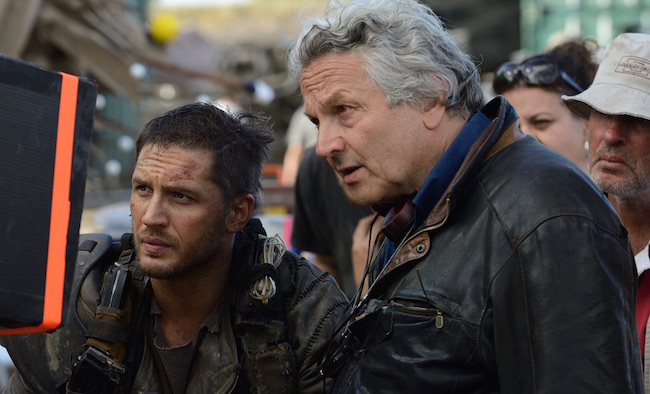 In a way, it’s kind of weird that if George Miller had released his fourth Mad Max movie in the ‘90s as originally planned, Mad Max: Fury Road probably wouldn’t be receiving all of the hullabaloo that it’s receiving now. (Just check out that obscenely great Rotten Tomatoes score.) There’s no doubt about it, Fury Road is a throwback (or, as Miller calls it, “old school”) feature that feels not as much a movie from a different era, but more a movie from no era. As Miller explains, it combines the fast pace of current American blockbusters with the real deal practical effects from 30 years ago. What we get might just be the perfect purist, raw action movie ever made.

When you meet George Miller, it’s hard to believe that this exceedingly nice 70-year-old man had this movie cooking inside him while he made two Babe movies (he wrote and produced both; he directed the sequel) and two Happy Feet movies. For awhile, it at least seemed like Miller’s filmmaking style had mellowed since his three Mel Gibson-starring Mad Max movies. After watching Mad Max: Fury Road, that assumption proves to be very, very wrong.

In Mad Max: Fury Road, Tom Hardy takes over as the title character, Max Rockatansky (Miller confirms that Fury Road takes place after Thunderdome, but not so far after that Max would have aged much, hence the part being recast – he compares Max to James Bond) and the plot is fairly simple: the hard-driving Furiosa (Charlize Theron) and outsider Max are helping five women escape their tyrant husband, Immortan Joe (Hugh Keays-Byrne); Immortan Joe wants them back. The result is basically a two-hour, insanely elaborate and choreographed car chase. It’s safe to say you’ve never seen a movie quite like Mad Max: Fury Road.

I met Miller on Monday morning at Warner Bros.’ offices in New York City, shortly after the first round of reviews had hit the Internet. Miller hadn’t seen them yet, but reacted like a school kid, cheering and slapping his lap when I told him how positive they were. Ahead, Miller talks about the changing landscape of filmmaking and why he decided to return to the world of Mad Max, why he looked to the past to make a modern blockbuster – and how his foray into animation made him a better live-action filmmaker.

Have you seen the reviews? They just came out.

Last time I checked, it was still 100 percent positive.

You must be enjoying the almost unexpected resurgence of practical effects.

Your brain knows. We are very, very skilled at watching, no matter how good it is. And this is a film that does not defy the laws of gravity – there are no flying humans or spacecraft – so it really had to be old school. We had to do it old school; we had to. It was real vehicles, real people and real desert.

Did someone along the way ever say, “If you use more CGI, you can save some money.”

That definitely was said. Yeah. But you couldn’t do it!

If you did, it wouldn’t get the reaction it’s getting. But there’s a resurgence — the next Star Wars used a lot more practical effects.

Which is great. But you know those guys on the poles? 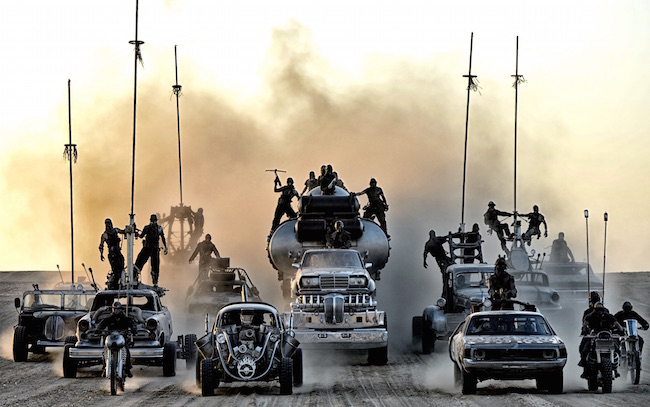 Well, yeah, the character, we know more about post-traumatic stress. I mean, the concept of Max, once it was going to be a chase and the McGuffin was going to be five females and we had a female road warrior, Max starts off like a wild animal – less than a human being, and we see the merge.

If this film had to be fit into the timeline of the other three films, where does it go?

It’s not precise chronology, because I never intended for there to be, but after the last one. After Thunderdome.

Shortly after, not 30 years after?

Yeah, like James Bond. He doesn’t get old over, what, half a century now? It’s the same thing. To me, it all starts next Wednesday, when all the bad things we see in the news happen and stuff we never saw coming. Jump 45 or 50 years hence and all the coastal cities have been razed and there’s been a migration into the center of this world. And a new type of human ecology with a dominance hierarchy ruled by the warlord that controls the resources.

Fury Road feels different than the other three films.

This is interesting to me: The Road Warrior had 120 cuts in just over 90 minutes. This has 2,700. But movies have gotten quicker. We are speed-reading movies now.

And blockbuster type movies today get weighed down with plot. Fury Road is very streamlined.

And you pick up what you can on the way. You pick it up in the design or a word here or whatever, that was the exercise. I mean, it might look simple, but there lies a lot of complex work, but that was the idea, just to go on the ride and get to know what you could and pick it up on the way.

Looking at your recent career – producing Babe, directing Babe 2, and directing two Happy Feet movies – it’s not that I thought you didn’t have a movie like Fury Road in you, I just assumed you didn’t want to do a movie like this anymore.

Well, they live like imaginary friends in your head. The truth of it is, it’s very simple, and it just occurred to me two months ago that this was the reason: When I made the first Mad Max, I didn’t have kids. And then when kids came along, all I ever saw in the cinema were family movies. So, my mind is alert to those. When I read the book of “Babe” (“The Sheep-Pig”), I was reading books to my kids. And I was like, “Oh, this will make a really interesting film if we can make the pig talk.” And then my kids grew up! And now I don’t watch family movies anymore! I’m watching more adult movies! I have teenagers now — just beyond teenage sons. It’s that simple.

What’s it like coming back to live action after animation?

What did you learn?

The freakiest thing I learned, Roman Polanski said, “There’s only one perfect place for the camera at any given moment in a movie.” When you do digital films, when you have the same performance, the same lighting, the same dialogue – everything is the same. But you can manipulate the camera.

It can be anywhere you want.

Yeah. For nothing, just sitting in front of the camera. It’s amazing how much you can influence the story and change the story depending on the camera. So, there is only one perfect place for the camera. To be honest, it made me feel afraid to some extent, because you do not have time to think about it too much while you’re shooting. It’s a little bit like if you play a football game, you don’t have time to think about what movie you’re going to do, it has to be reflexes in a way. But I had a great cameraman in Johnny Seale, who came out of retirement. It was like the Rolling Stones getting back together, we are all grey-haired [laughs].

Over the weekend, I was in a grocery store and heard Tina Turner’s “We Don’t Need Another Hero” from Beyond Thunderdome.

To be honest, we didn’t have time to think about it and, yeah, that was a thing in the ‘80s. It’s another thing now. And I wanted to stay true to the world and I wanted the world to feel very authentic while it’s up there on the screen.