New On Home Video: A Feast Of Guillermo Del Toro And More

With so many movies hitting VOD, streaming services, Blu-ray, and DVD, it’s hard to know what to watch next. New On Home Video offers a bi-weekly guide to what’s worth seeking out, with an emphasis on what’s really worth watching, from recent theatrical releases to classics and long-lost gems.

Trilogía de Guillermo del Toro (Criterion)
A lot of filmmakers attempt to adopt a one-for-them, one-for-me strategy to making movies, alternating films for studios and more personal projects. With Guillermo del Toro it’s never entirely clear which is which. Del Toro’s passion is as evident in films like the masterful Blade II, assignments a lot of directors would have only accepted grudgingly, and the Hellboy franchise as last year’s overlooked passion project Crimson Peak. That said, it’s also clear that Del Toto sometimes indulges his populist instincts more than his artful impulses and vice versa.

The essential (and beautifully packaged) box set collects three films at the heart of del Toro’s filmography: His 1993 feature debut Cronos, the 2001 ghost story The Devil’s Backbone, and the dark 2006 fantasy Pan’s Labyrinth. All showcase del Toro’s comfort with erasing the line between the mundane world and the otherworldly realm just beyond it. It’s easy to see the director’s obsessions already on full display in Cronos, a vampire story, of sorts, about the consequences of searching for immortality. The latter two entries make particular sense together. Set, respectively, during and in the aftermath of the Spanish Civil War, both use the supernatural to illustrate the ways children get trapped in the machinations of history.

The extras offer a feast for del Toro fans, from commentaries to looks at the effort behind Pan’s Labyrinth‘s remarkable creatures to a tour of Bleak House, the hoarding-inclined director’s art-and-memorabilia-filled second home, a place overrun with everything from ancient books to the tattered paperbacks of del Toro’s youth. It’s a place where del Toro seems able to wander around the contents of his own brain to his heart’s content. The rest of us just have his movies.

McCabe and Mrs. Miller (Criterion)
Speaking of directors who used success to make whatever they wanted, Robert Altman took the clout he earned turning M*A*S*H into a blockbuster to make this beautiful, mournful anti-Western set in a frontier town where a gambler named McCabe (Warren Beatty) meets a madam named Mrs. Miller (Julie Christie), arriving just before the forces of civilization and capitalist enterprise show up to shut down the plans they launch together. Altman’s career is littered with masterpieces, but this might be chief among them, capturing everything the director did best, from the overlapping dialogue to the drifting camerawork to a tone that freely mixes romanticism with fatalism. Few saw it in 1971, but its reputation has grown with each year, a reputation this lovely Blu-ray edition only confirms.

The Marx Brothers Silver Screen Collection (Universal)
Earlier this week, Vox published an essential article about the vanishing role of classic film in everyday life. Where classic films used to fill the down hours in many a local station, and the shelves of video stores, they’re tough to find on streaming services and now have been largely relegated to Turner Classic Movies. That means the last couple of generations have grown up without easy access, for instance, to the movies that formed the spine of film comedy, including the classic films of the Marx Brothers. This box set offers a healthy corrective, gathering together Groucho, Harpo, Chico, and Zeppo’s classic early films — the output got a lot spotty later — when they unleashed several different varieties of anarchy on the unsuspecting straight world. A vaudeville act before making it to the big screen, the Marx Brothers’ brilliance comes in part from offering something for everyone: Groucho’s verbal wit, Harpo’s silent (and often lecherous) physical comedy, Chico’s ability to mangle every word, and Zeppo’s… well, he was a pretty good straight man. Newcomers should jump in with Duck Soup or Monkey Business, the two straight-up funniest movies the group made. But you’ll want to see the rest. This is where comedy comes from.

Boyhood (Criterion)
Richard Linklater’s 2014 film would earn a place in the history books even if it weren’t any good. Shot, in secret at first, over the course of 12 years, it follows a Texas kid named Mason’s growth from childhood to adulthood over the course of 12 chapters. It’s a lovely coming-of-age story that, for the most part, focuses less on moments of high drama than the everyday changes Mason faces. (The melodrama-skirting middle sequences are the film’s weakest.) In the process, we get to see the world change around him as he drifts past bulky iMacs, Harry Potter release parties, the contentious 2004 election, and so on. It’s a singular accomplishment, one supplemented here by various making-of features and a cast-and-crew commentary that runs the course of its nearly three-hour running time.

Crouching Tiger, Hidden Dragon (Sony)
If it’s been a while since you’ve seen Ang Lee’s emotionally rich 2000 wuxia, check out this new version, which offers a 4K remaster that make the visuals pop. 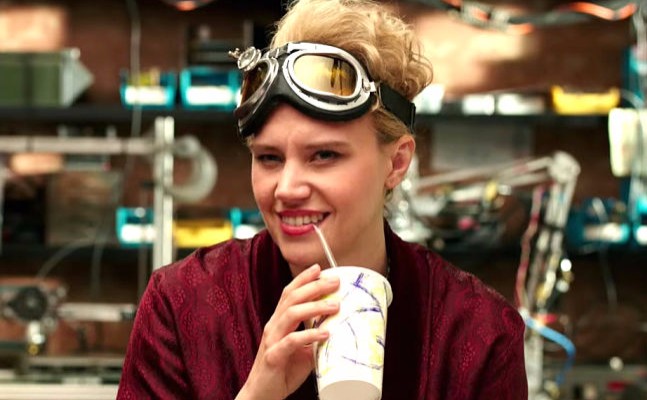 Ghostbusters (Sony)
Now that the dust has settled it is possible to see this past summer’s Ghostbusters remake for what it is: A flawed but pretty funny movie that often uses charm (and an especially brilliant Kate McKinnon) to make up for its so-so story and underdeveloped characters. Its home video release will probably be the first step in its rehabilitation as a new group of viewers, girls and boys, embrace it the way previous generations latched on to the 1984 original. (Or maybe its future belongs on VR: Its home release coincides with the release of an augmented reality game.)

Child’s Play (Scream Factory)
A dying criminal uses voodoo to transplant his soul into the body of a child’s doll then resumes his murderous career in toy form. Just by virtue of its premise, Child’s Play seems destined to be one of the sillier ’80s slasher films. Yet director Tom Holland (Fright Night) gets some real chills from the premise, without taking it too seriously. Brad Dourif provides the voice of Chucky, who starts shoving those who might stand in his way pretty much as soon as he arrives at the Chicago apartment of a single mom (Catherine Hicks) and her son. The film inspired a string of sequels, some better than others, but the original remains a good time.