The Straight Man: Some Of Nicolas Cage’s Best Performances Find Him Letting Others Play The Eccentric

All this week, Uproxx will be paying tribute to the many facets of Nicolas Cage, from his big-screen triumphs to the legends that have come to surround him and the cult following both have helped create. Next: An appreciation of the times when Cage downplayed played it (relatively) straight, and did some of his best work in the process.

Is there such a thing as a Nicolas Cage role? That’s a trickier question than it might seem. Certainly, there are roles that Cage seems to have been born to play (Raising Arizona‘s H.I. McDunnough, Wild at Heart‘s Sailor Ripley), as well as a slew of roles — most of them from this decade, sadly—that didn’t remotely require such a distinctive presence. There are also Cage performances that have alienated many people, because he seems to be actively undermining the part as written; history has yet to render a final judgment on the adenoidal voice he inexplicably chose to employ as an aspiring ’60s crooner/heartthrob (and the character’s washed-up ’80s counterpart) in Peggy Sue Got Married.

On the other hand, Cage’s Oscar-winning turn in Leaving Las Vegas, while it provided him with plenty of opportunities to go full Cage, seems as if it could have been played, if perhaps less memorably, by almost any actor in Hollywood. The criteria aren’t totally clear-cut, but when you think of Cage, you most likely think wild, expressionistic, over the top. If the character seems borderline crazy, give his agent a ring. If you’ve got an everyday Joe, maybe not so much (although Cage’s best work of the past few years was in the title role of Joe).

For example, let’s say you’ve never heard of Birdy, Alan Parker’s 1984 adaptation of William Wharton’s novel of the same name. It’s the story of two friends who meet as teenagers during the 1960’s and wind up being sent to Vietnam. One of them, Al, is a perfectly ordinary guy who’s into cars, girls, sports, etc. The other, known only by the nickname Birdy, is so obsessed with all things avian that he builds himself a (non-functional) flying machine, constructs a full-body bird costume in an effort to blend in with the pigeons roosting below his bunkbed, and eventually, after a traumatic combat experience, winds up in a psych ward, refusing to speak, perching naked on the edge of his bed and staring forlornly at the closed window. Which role would you assume that Cage plays in this motion picture: Al, or Birdy? 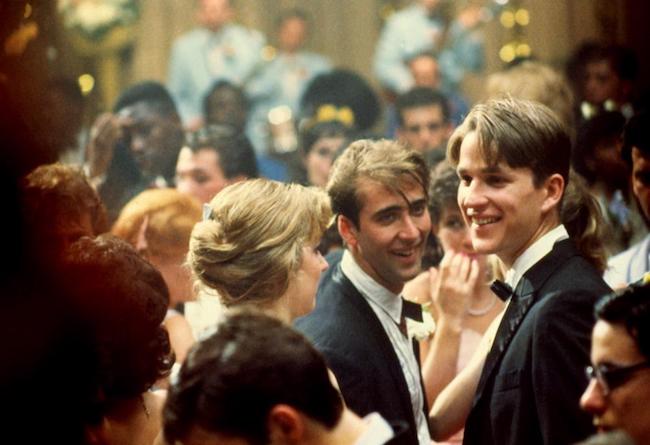 The correct answer came as a surprise even to Matthew Modine, who auditioned for Al and was stunned when Parker asked him to play Birdy instead. Cage was given the less eccentric part — though, being Nicolas Cage, he still managed to find a way of taking it to an extreme, having two of his front teeth pulled out for scenes in which Al is recovering from a severe facial injury he incurs on the battlefield. (The were apparently baby teeth that needed to come out, but still.) Seeing Cage embody the comparative voice of reason and stability is downright odd, from today’s perspective.

He’s predictably adept at straight man comedy (offered his own bird suit, Al plaintively replies “I don’t want the pigeons to think I’m one of them, Birdy”), but also surprisingly tender and vulnerable. Birdy is the rare film about male friendship without any “no homo” vibe whatsoever, with Parker repeatedly employing pietà imagery; Cage makes Al’s love for Birdy so achingly sincere that the reasonable question of why someone who exudes casual cool would befriend a social misfit never even arises. Performing heartfelt monologues with his face swathed in bandages was no doubt a challenge that Cage welcomed, but it’s the simple, raw yearning that hits hardest.

Decades later, Cage would channel some of the same ingenuousness as Donald Kaufman, fictional brother of real-life screenwriter Charlie Kaufman. On the surface, Adaptation’s twin lead roles seem like enough of a stunt to qualify as Cage-y; much of the film sees the actor playing opposite himself, at once cynical malcontent (as Charlie) and endearing bumbler (as Donald). But the film’s showiest, juiciest role is that of unflappable orchid thief John Laroche, one of the subjects of the book that Charlie is struggling to adapt for the big screen. Sure enough, Chris Cooper wound up with that year’s Oscar for Best Supporting Actor, while Cage’s dual performance was mostly ignored. (This even though Cooper used prosthetics to give Laroche the appearance of missing some front teeth, rather than pulling his actual teeth out. Where’s the man’s dedication?!)

But knowing that Cooper was chewing the scenery elsewhere freed Cage to underplay more than he normally might have when given the opportunity to tackle identical opposites. Charlie remains believably frustrated and peevish throughout, while Donald, despite being pointedly imaginary — a physical representation of Kaufman’s impulse to sell out — is treated with genuine affection, as if he’s an amalgam of all the warm, empathetic traits Kaufman fears he lacks. Both characters are exaggerated for comic effect, but only slightly, and Adaptation is stronger for Cage’s atypical restraint.

The most extreme example of this phenomenon, of course, is John Woo’s Face/Off, in which Cage and co-star John Travolta literally switch roles at the first act break. Early in the film, Cage deliberately hams it up as master criminal Castor Troy, turning in his most aggressively cartoonish performance since Vampire’s Kiss. He struts around like a peacock; he puts a goofy spin on every line of dialogue; he bugs his eyes and opens his mouth wide while grabbing a young girl’s ass (dressed as a priest, no less). Thanks to some sci-fi face-swapping technology, however, Travolta soon takes over as Castor, expertly mimicking Cage’s various physical and vocal tics, while Cage becomes Travolta’s character, FBI agent Sean Archer, who was kind of a gloomy Gus even before he got trapped in the physiognomy of the man who killed his son.

It’s an inspired idea that gives Cage another chance to burrow into someone’s credible pain; any impulse that he might have to “go electric,” so to speak, is countermanded by the understanding that Travolta has that job for the time being. What’s more, the whole point of Archer donning Troy’s face in the first place is so that Archer can get info about the location of a bomb from Troy’s brother (played by Alessandro Nivola). Which means that, at various crucial moments, Face/Off requires Cage to play Archer trying to play Troy. He spends much of the movie doing what amounts to a deliberately bad impression of his own archetypal performance. It just doesn’t get any Cagier than that.