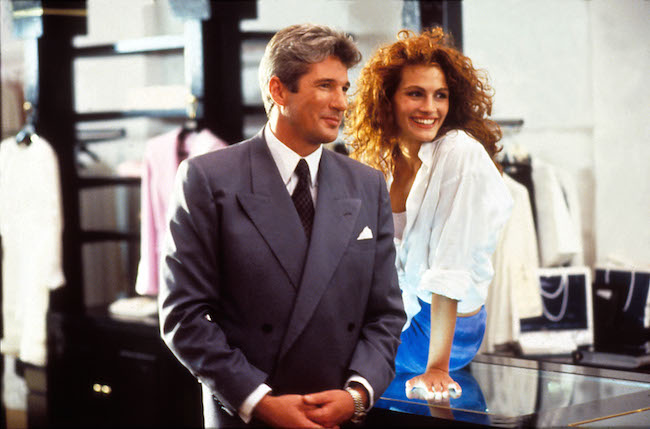 It’s hard to emphasize just how big of a deal Pretty Woman was when it was released 25 years ago today. Which is confounding because, watching the film today, it comes off as a sometimes charming, sometimes degrading movie that, if it were released today, would probably (A) earn $50 million at the box office — as opposed to the almost half a billion it earned in 1990 money — and (B) earn the scorn of many Twitter users for its themes. But, 25 years ago, (after a few rewrites to soften its “dark” tones) Pretty Woman was everywhere — somehow even temporarily turning recording artists Go West and Christopher Otcasek into household names.

But, anyway, this piece does not exist as a critical deconstruction of Pretty Woman, but, instead, that first paragraph just serves as a reminder that this was a movie that was inescapable and, for me, became the bane of my existence because I was 15 years old, on my first date, and Pretty Woman was rated R.

Looking back now, I did not plan this out very well. What’s weird is that I had been to a lot of rated R movies before (I had seen the eventual Best Picture winner Ordinary People in a theater when I was six years old; fun fact: Ordinary People is a terrible movie for a six-year-old who just wanted to watch The Empire Strikes Back again), but I had always been with some sort of parent or guardian, though I had never given that much thought. I remember thinking that whole rated R rule was just a suggestion. I mean, I was just two months from being able to legally operate a two-ton piece of machinery on public roadways, of course no one would care if, on my first ever date no less, I purchased tickets to Pretty Woman.

I will refer to the other person in this story by the name Heather, because that is her given birth name. We would eventually date for 11 months before never really speaking ever again. I suspect a lot of us have early relationships like that, where that other person was around for so many meaningful early moments, yet today he or she is a complete stranger.

We had been planning our first real date – one that didn’t involve a high school hallway — for weeks. Heather’s father wouldn’t allow her to date — which, in retrospect, seems like a very smart policy — so we had to sneak around. Instead of the popular “my parents will drop me off” tactic, Heather’s older sister — who drove a GTO! — picked me up at my parent’s suburban Kansas City house and drove us to what at the time seemed like a very large movie theater because it had eight screens.

I remember listening to a lot of Roxette that day. Pretty Woman had already been out for a week and was all anyone could talk about, and Roxette – a Swedish duo who had four previous hit singles from their Look Sharp! album – was on constant airplay with “It Must Have Been Love,” which had a corresponding video that featured clips from the film spliced in-between Roxette performing the song in a warehouse. (At one point, Pretty Woman is projected onto Marie Fredrikson’s dress as she stands near the Lotus Esprit from the film; the ’90s were off to an interesting start.) Anyway, for some reason I thought listening to Roxette would help me prepare. I didn’t just want to see Pretty Woman, I wanted to be moved by Pretty Woman. (I’m well aware how stupid this all sounds now.) Anyway, everything was perfect

“Great, do you have identification?”

“Then I can’t sell you these tickets.”

“But this is our first date.”

“But I’ve been listening to Roxette all day.”

“[Shrugs.] Do you want two tickets to Teenage Mutant Ninja Turtles instead?”

We tried again a week later. This time, Heather’s older sister bought us the tickets, all we had to do is walk in. As the usher tore our tickets he asked me, “Are you 17?” Now, you have to understand something, and I believe this may be something inherent to the Midwest, but I have a difficult time lying to any authority figure. And when I was 15, anyone who had a job at the movie theater was an authority figure. If I had written the lyrics to John Mellencamp’s 1984 single “Authority Song,” the lyrics would have been something like, “I obey authority and authority usually leaves me alone.” As you might suspect, I answered, “No.” That week we saw Earnest Goes to Jail.

The next week, we finally saw Pretty Woman, which after all that didn’t really seem worth the hassle. Though, about halfway through, Heather leans over to me and tells me that she heard a laugh from behind us that sounded just like her father – her father who wasn’t supposed to know about any of this. (It was him; no, he didn’t say hello after.) And I remember that watching Pretty Woman was the longest movie-watching experience of my life; under constant surveillance by Heather’s father’s watchful eyes. And, in retrospect, that seems like a really smart policy.