A Closer Look At The Outcry Over #WheresRey

As news of the upcoming second wave of Star Wars: The Force Awakens merchandise was passed around earlier this week, one thing became abundantly clear: Rey is front and center. That’s in sharp contrast to the first round of toys that hit shelves last fall, which seemed to forget the movie’s lead character, Rey, played on-screen by newcomer Daisy Ridley.

The resulting outcry culminated in the creation of the hashtag #WheresRey, used by fans none-too-happy with their lack of options when it came to the force-sensitive scavenger from Jakku. It fed into a recurring issue concerning how female characters’ merchandise (or lack thereof) is marketed to the public. But has there really been a shortage of Rey in molded plastic form, or is/was there just an expectedly high demand around the relaunch of the most successful film franchise of all time? And if so, why? We went looking for answers, both from collectors and in stores.

Up until this second wave was announced, Rey had been omitted from a couple of key Star Wars playsets, first the Millennium Falcon, which instead came with Finn and Chewbacca, and most noticeably from the Star Wars Monopoly game, which included Kylo Ren and Finn, along with a Darth Vader and a Return of the Jedi-era Luke. The backlash against this particular omission first led Hasbro to cite spoiler alerts in response to their criticism, though they later announced that they’ll be adding her to the game, right around the same time director J.J. Abrams publicly stated that her absence “doesn’t quite make sense.”

This isn’t the first time this issue has come up. Last year, Black Widow wasn’t included in Marvel’s Avengers: Age of Ultron Quinjet playset where she was swapped out with Captain America. The previous year, Marvel and Hasbro were also at the center of controversy over the omission of Gamora from the Guardians of the Galaxy product line. It’s worth noting that this is the second time in eight months Star Wars fans noticed an underrepresentation of female characters, previously objecting to Hasbro’s The Black Series, a set of six-inch Star Wars figures aimed a bit more at collectors. At first, the line only included Leia in her metal bikini, which didn’t go over terribly well.

Going store-to-store not long after the movie was released, it was difficult to tell exactly how well represented Rey really was. Everyone knew this movie was going do be a juggernaut, and with the release date taking place during the holiday season, as opposed to summer releases the prior six installments had, demand for merchandise was at an all-time high. As we expected, most of the displays in the big-box stores were picked over.

Stray figures and playsets would be strewn about, including another one of Rey’s more notable omissions, a six-pack of 12-inch figures that included Finn, Poe, Chewbacca, a TIE pilot, a Stormtrooper, and Kylo Ren… and that was it. At this point, not only were there were no Rey figures to be found, there weren’t really any figures in stock at all, except for an occasional Constable Zuvio, a nearly unrecognizable character that was cut out of the film.

“[Rey’s absence] is not as bad as the Black Widow situation was, but it’s still noticeable,” says Michael Wolff, the merchandise manager of Dragon’s Lair Comics & Fantasy in Austin, Texas, “It’s not a huge dismissal, but she’s not given the focus she deserves.” While Dragon’s Lair carries a substantial amount of Star Wars merchandise, Wolff didn’t seem that surprised that Rey was coming up in short supply.

“It’s something we’ve seen in the industry for a while, that there’s clearly a gender role designed in these toys,” says Wolff, who sees it as companies not wanting to compete with themselves, meaning advertising action figures to both boys and girls could, in turn, hurt sales of the toys aimed exclusively at girls. He also pointed out that the Rey merchandise that’s out there does sell well. For example, the Rey figure put out by Funko is one of the store’s top-sellers.

“Hopefully the monetary success of The Force Awakens will make toy companies realize this market does exist, [and] just maybe, it’ll make parents think twice about telling their children ‘You don’t want this toy, it’s for girls’ or vice versa — because this happens so much more than people realize,” says Molly Jane Kremer, a Chicago-based collector and writer at DoomRocket. “Kids — and adults let’s be honest — will want to buy merchandise for whichever characters they’re enjoying the exploits of onscreen. The more [successful] female-led tentpole films there are, the more demand there will be for female action figures of the characters. And I’m pretty sure Hasbro and Disney want to put toys in the hands of whoever would like to buy them.”

Taking into account that high demand, those out shopping have another aspect to consider: Not since the original Star Wars has there been such a slight selection of action figures available for purchase. The year after A New Hope hit theaters in 1977, the number of 3.75-inch action figures available topped out at 20. Compare that to Empire and Jedi, which had 29 and 59 figures, respectively. By the time the prequel trilogies came around, each film had upwards of 60 or more figures each of the three films hit theaters. Like many nods The Force Awakens makes to A New Hope, the latest installment has also limited its selection of 3.75-inch figures to about 20.

This past year also marked the first annual Force Friday, an entirely new Star Wars-centric shopping holiday. Held on September 4, 2015, it saw the debut of much of the current merchandise for The Force Awakens, as well as pulling in $1 billion in revenue domestically ($5 billion worldwide) by calling to action a fanbase already prone to collecting.

“They know their biggest market is for boys,” says Bobby Marlar, an avid collector who has two rooms of his house dedicated to Star Wars memorabilia. “I saw an equal representation [of Rey] for a minute, but you don’t see something stay on a shelf that long, necessarily,” going on to explain that he hadn’t ran across a Rey figure in more than six weeks, though other characters were available in abundance — specifically, Constable Zuvio. “How much money was spent making a toy, a male toy, of a weird thing that is cut out of the movie? How much money did they make selling it to us, and us buying it, just believing it’s part of the Star Wars universe?” he asks. 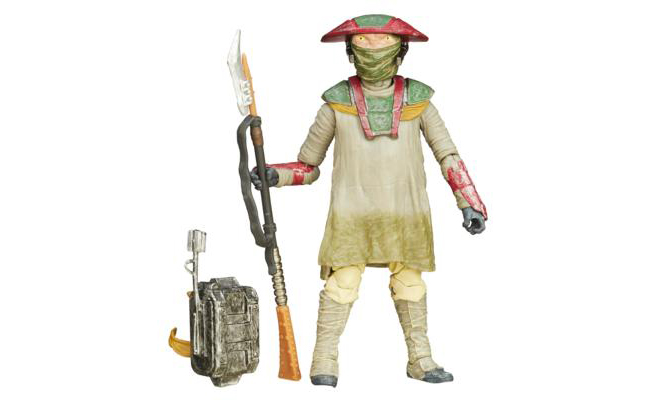 Another collector, Rob Gasper, orders in bulk from wholesalers, and while he hasn’t noticed much in the way of Rey prior to the second wave, a few minutes on some of these retail sites shows a lack of female Star Wars characters in general, not counting characters from the now retconned Expanded Universe.

“I would say it has to do with the quality of the figure. Looking at the Slave Leia, the figure was horrible, and they sat on shelves for months and months,” says Gasper, offering a possible explanation as to why Rey wasn’t as prominently offered in the beginning. As the father of a young daughter who is becoming a collector herself, Gasper points out that “She definitely wants female characters exclusively. If she has a choice between a secondary or tertiary female character, she’ll choose that over a main male character.”

It’s worth pointing out that, amidst all the backlash over the absence of Rey, another character, Captain Phasma, played on-screen by Gwendoline Christie, was aggressively pushed in both the film and the toy lines in the weeks leading up to the film’s release. So much so that her relatively small role in the film was cited as one of the fans’ biggest disappointments.

“As the father of two young girls, it’s nice that finally they don’t have to argue over a single character to pick as ‘them’ when relating to the production,” says Jeremy R. Hudson, also a collector and writer. “Granted, with the new Star Wars movie my youngest didn’t pick Rey or Captain Phasma as a favorite, she still wants to grow up to be Chewbacca which I am still very OK with.”

We spent the days leading up to the second wave announcement revisiting several stores, and once the buzz had died down slightly, new shipments of toys had arrived, and suddenly the shelves were stocked, at least partially. This included, for the first time, a handful of Rey figures — though fewer in number than any other character. Still, it was the kind of variety you’d expect as a casual shopper.

As we get deeper into an era when female stars’ ability to carry action film franchises is unquestioned, it’s clear that these mega-movie franchises are marketed for everyone, but the merchandise is still carefully segmented, resulting in fewer risks taken. Although, if there truly is a demand for Rey, this next wave of merchandise, including numerous action figures as well as her lightsaber, will give fans a chance to prove it.

“I think the success of the film and the fact that the lead characters are a woman and a person of color will do more to help in toy underrepresentation than the outcry will,” says Kremer, adding that “maybe they should have given more thought to the Constable Zuvio figures I see lingering on toy racks. I don’t even think I saw that dude in the movie, and I’ve seen it three times.”